Dinosaur museum gets green light during Community of Leaders program 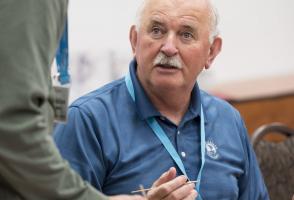 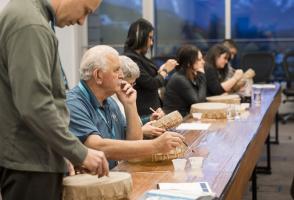 Dinosaurs may have met their maker millions of years ago, but they continue to fascinate with each major fossil discovery in Alberta and beyond. The man heading up a Northern Alberta project to build a new dinosaur museum in the Grande Prairie region is well aware of the universal fascination with dinosaurs and how they inhabited this part of Canada.

Community of Leaders program alumni Brian Brake, executive director of the Phillip J. Currie Dinosaur Museum in Alberta’s Peace Country, was in the middle of the two-day leadership program sponsored by Encana Corporation and Cenovus Energy in Banff when he got the call that gave his $30 million project the green light it needed to proceed .The approval came with an additional $2 million from the county.

Brake and one of his board of directors attended the Community of Leaders program despite the monumental workload of promoting the museum and raising an additional $6 million to meet the project’s target – and Brake was glad they did.

“You get so taken with the day-to-day struggles to achieve the next step that you often forget to take time and go back and just review what you have done and see if there is a better way to go forward,” he said.  “And I think the couple of days we spent there was good to do that.”

Brake particularly appreciated the chance to meet other non-profit leaders struggling with similar challenges. “It was good to hear some of the creative ways that some of the other people are trying to solve problems, and also being able to add to the discussion as well.”

The theme of the 2012 Community of Leaders program was “Action Oriented Strategies”, something with which Brake is quite familiar. When he was contracted six years into the foundering museum project, he analyzed where it was failing, what could be changed and improved, and began to work with his team and the leaders in the Peace Country to communicate a clear vision.

The Community of Leaders program reinforced the path that Brake and his museum team have taken to achieve success. “What I got out of it mostly was process, and the need to make sure that your vision and how you are going to get there is sorted out in your own mind before you sit down and try to communicate it to others.”

Soon after he arrived in Grande Prairie, Brake set out to do that very thing.

“We briefed every community in the Peace region, and there are 27 communities, four First Nation communities, and four chambers of commerce. Over two and a half years we briefed everyone, and as we briefed them, we asked them to sign a certificate of support. One hundred per cent of them signed on. It wasn’t hard to sell the community — they just needed to hear about it.”