Banff, Alberta, January 14, 2014 -- This summer, The Banff Centre will partner with Toronto’s Against the Grain Theatre and the Canadian Opera Company  for a new performance training program that will take opera off the stage and into the community.

"The Banff Centre has been involved in developing the next generation of opera stars for more than 50 years and this summer we introduce a new and innovative development model for artists with an eye to the future of opera in Canada and internationally," said Carolyn Warren, vice president, arts at The Banff Centre. “We’re thrilled to partner with Canadian Opera Company and Against the Grain, organizations that represent both foundation and experiment in this vital art form.”

“Since its launch three years ago, Against the Grain Theatre has developed into one of the most exciting new opera initiatives in the country,” said Alexander Neef. “I’ve been watching the company grow, and am proud to play a role in fostering this extraordinary new generation of artists and producers. Many of the artists associated with AtG performances have trained with the COC or appear regularly with the company. In fact, AtG’s artistic director Joel Ivany has served as assistant director with the COC on multiple occasions and music director Christopher Mokrzewski is a graduate of our Ensemble Studio training program. The Banff Centre is one of the finest incubators of fresh talent, and this partnership presents a unique opportunity for the COC to support AtG’s bold explorations into new realms of opera.”

Following auditions in Toronto and Vancouver, eight emerging professional opera singers will be invited to the intensive. They will workshop skills that challenge the conventions of opera performance, production and design, and  develop a modern interpretation of Mozart’s Don Giovanni for presentation at venues throughout the Banff community.

“This residency demonstrates something heartening,” said Christopher Mokrzewski. “Two of the most established and respected cultural institutions in Canada — which already employ innovative and creative thinking of their own — are willing to support the development of an indie opera company that occasionally turns convention on its head. This shows vision, confidence and a true commitment to the vitality of the artform. I’m chuffed!”

At the end of the residency, artists will spend two days of concentrated sessions with Neef and Debus, and premiere Uncle John, an updated production of Don Giovanni set in Banff in 2014, with a new English libretto by Joel Ivany.

“This is a significant moment for AtG, as we share our work with a broader audience with the help of The Banff Centre, and in partnership with the Canadian Opera Company," said Joel Ivany. “The Open Space program will stretch us in new ways, which is crucial for a young company, especially one as independent as ours. I couldn’t be more excited and proud to partner with these two organizations. We're doing something different and important. I can't wait to collaborate with the young artists who will participate in our program.”

About The Banff Centre: The Banff Centre's mission is inspiring creativity. Thousands of artists, leaders, and researchers from across Canada and around the world participate in programs at The Banff Centre every year. Through its multidisciplinary programming, The Banff Centre provides them with the support they need to create, to develop solutions, and to make the impossible possible. Moving forward, the Centre will disseminate the art and ideas developed in Banff through initiatives in digital, web, radio, and broadcast media.

Joel Ivany, Artistic Director, Against the Grain Theatre
Stage director Joel Ivany is the founder and artistic director of Against the Grain Theatre. He was a recent finalist and prizewinner in the European Opera-Directing Prize for his concept of Bellini’s I Capuleti e i Montecchi with designers Camellia Koo and Jason Hand. Recent directing credits include directing Così fan tutte for The Banff Centre, a new production of Les contes d'Hoffmann for Edmonton Opera, revival director of Le nozze di Figaro at the Norwegian National Opera, knotty together (a new work composed by Njo Kong Kie and performed in Dublin, Ireland) and the world premiere of Gavin Bryars’ Marilyn Forever, based on the life of Marilyn Monroe, in Victoria, BC. He recently served as associate director for Thaddeus Strassberger's acclaimed production of Nabucco at both Washington National Opera and Minnesota Opera. Joel holds a music degree from the University of Western Ontario and an artist diploma in opera directing from the University of Toronto. Upcoming projects include directing new productions of Verdi's Macbeth at Minnesota Opera, Britten’s Albert Herring for the University of Toronto, Pélleas et Mélisande for AtG and Carmen for Vancouver Opera. For more information, please visit www.joelivany.com and find him on Twitter @joelivany.

Christopher Mokrzewski, Music Director, Against the Grain Theatre
Pianist, vocal coach and conductor Christopher “Topher” Mokrzewski is a founding member and music director of Against the Grain Theatre and resident conductor of Calgary Opera. A 2008 graduate of the Canadian Opera Company Ensemble Studio, he has been described by music critic John Terauds as “one of those bright, eager, whip-smart young artists who could give even the most hardened cynic a jolt of optimism about the future of classical music and opera” and was named one of CBC Music’s “Hot 30 Classical Musicians under 30” in 2013. Topher is frequently sought as a soloist, collaborator and music director. His 2013/2014 season includes serving as assistant conductor and répétiteur for Calgary Opera’s productions of Rossini’s The Italian Girl in Algiers, Wagner’s The Flying Dutchman and Puccini’s Madame Butterfly in addition to conducting the Emerging Artist’s production of Britten’s The Rape of Lucretia. He also conducts Mozart’s The Magic Flute at Saskatoon Opera and AtG’s Messiah for Against the Grain Theatre. Topher holds multiple degrees in piano performance from the Eastman School of Music, and is a graduate of the Vocal Piano Program at the Music Academy of the West in Santa Barbara, California. From a young age he enjoyed success as a solo pianist, performing his first concerto with symphony orchestra at the age of 11. For more information, please visit www.christophermokrzewski.com and find him on Twitter @tophski.

Alexander Neef, General Director, Canadian Opera Company
Alexander Neef, appointed General Director of the Canadian Opera Company in June 2008, has worked with some of the most prestigious arts organizations in the world. His career as an artistic administrator has taken him from the Salzburg Festival to the RuhrTriennale in Germany, Opéra national de Paris and New York City Opera, to leading the Canadian Opera Company, Canada’s largest opera company and one of the most important in North America. The Director of Casting for Opéra national de Paris from August 2004 to September 2008, Mr. Neef was one of Gerard Mortier’s closest collaborators and was instrumental in the production of over 80 operas. In addition to his role at Opéra national de Paris, in March 2007, Mr. Neef joined Gerard Mortier as Mortier prepared for his tenure at New York City Opera.  Previously, Mr. Neef was a member of the artistic administration at the RuhrTriennale, a three-year, multi-disciplinary festival in the Ruhr region of Germany where he was responsible for opera, theatre, and dance productions as well as concerts and events. Prior to his tenure at the RuhrTriennale, he spent two seasons at the Salzburg Festival as a production manager with the artistic administration. Mr. Neef has a master of arts from Eberhard Karls University of Tübingen where he studied Latin Philology and Modern History. 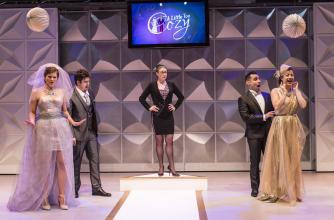 The Banff Centre is pleased to announce it will collaborate with Against the Grain Theatre and Canadian Opera Company for a one-of-a-kind, immersive, performance-based training program that will take...
Read More