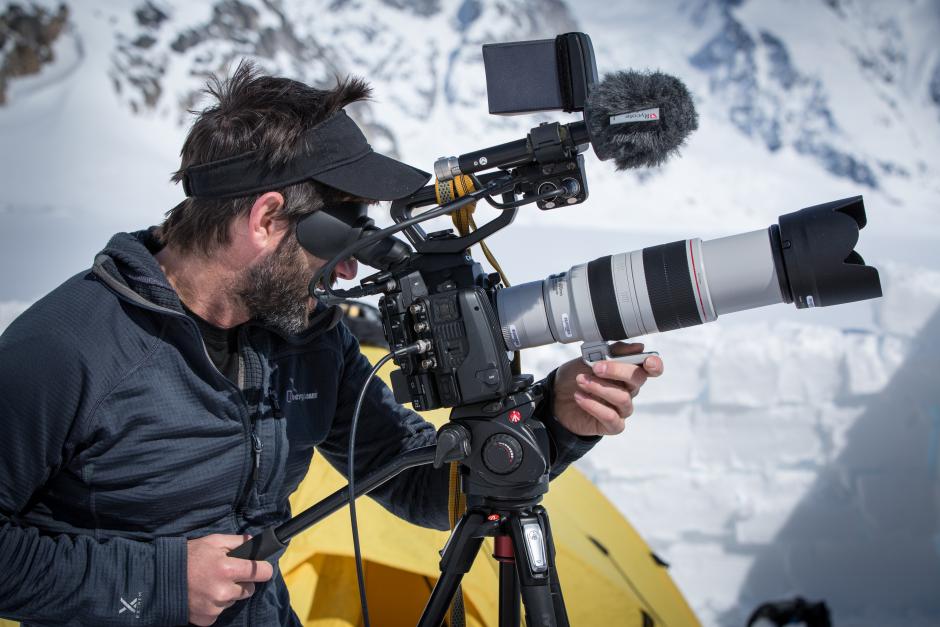 The Citadel is a 3,000 metre peak located in the Great Alaskan Range. A new film follows two alpinists as they attempt the first ascent of the north-west ridge. The North American premiere of Citadel is November 7 as part of the 40th Annual Banff Mountain Film and Book Festival. Award-winning filmmaker Alastair Lee took a moment out of his busy autumn schedule to answer a few questions about the making of the film and why the festival is the perfect place for the North American premiere.

What was it about this particular climb that made you want to tell the story through film?

This mountain, Citadel, in The Neacolas, Alaska, embodies everything I love about the mountain environment and has all the pre-requisites for a great film. It's remote, in a little-known, relatively unexplored area, has amazing unclimbed features on it, and is an absolute stunner. You couldn't ask for a more enticing, yet daunting-looking, peak. It's also at relatively low altitude which makes not just the climbing, but also the filming, much more feasible. The major downside was the notoriety of the weather in the area which really puts things in the hands of the weather gods. We saw a shot of the mountain by Carl Battreall on the Alpinist website in an article about unclimbed lines and peaks in Alaska. It was an amazing photograph of a beautiful looking peak but once you visit the area it's even more amazing, like a Chamonix range tucked away in an unknown corner of Alaska.

Was filming Citadel more challenging than some of your past work? If so, why?

I wouldn't say more challenging, more that it presented different challenges. Filming hard alpinism, particularly during a first ascent, is a huge task in filmmaking terms. Unlike filming big walling, where it's possible to take a cameraman as part of the team most of the time, with hard alpinism this isn't really possible. Part of the deal with hard alpinism and a well-honed team like Matt Helliker and Jon Bracey, is that sometimes it's all about trust. They might not actually be attached to the mountain with belays being hard to come by. With that in mind, taking a guy who's not at the same level of climbing and has around 12 - 15 kg of camera kit with him isn't going to work. It could get very serious very quickly.

What made this film work was the use of filming from a helicopter with a Cineflex setup (image stabilizer). While the mountain is remote, it's just about accessible by air and although there was a bit of confusion over the altitude of the peak, it was just about film-able from base to summit. However, on a very limited budget, with weather changing the plans day by day, orchestrating the chopper to be in position at just the right moment, when the climbers were doing something exciting or spectacular and the conditions were flyable, the light was good, and getting the chopper to find the climbers on this vast peak was no mean feat. For me, that presented the biggest challenge. Communication was via satellite phone to the heli, then ground to air radio once in range. Adding to the complication was the fact that the Citadel is in Lake Clark National Park and while we had a film permit, aircraft landing is strictly prohibited. That means if the chopper turns up but the cloud level has dropped, or the wind is too high, it has to go away again and that's a whole load of cash it just cost to get zero seconds of footage. I absolutely loved it though. The whole process was like a game of chess. I was constantly assessing the weather and conditions, trying to second guess where the climbers would be and factor in flight times, etc. It was one of the best and most exciting times I've ever had in the mountains. It felt really cutting-edge — we were really pushing the boundaries of what was possible.

Citadel didn't have a big corporate backer. Did this restrict you or provide you with more creative freedom?

Creative freedom has never been a problem  In the past, when I've had brands behind my work, they are buying into my creativity in some ways so it would be foolish of them to try and intervene. They stick to selling jackets and I stick to making films — it's pretty simple. Not having one major brand behind this project was double-edged; in some ways, the pressure was off and it was certainly great not having to try and upload blogs and material from basecamp which is always a major faf [gong show]. But of course, there was still pressure — the same pressure I have on myself for a project I have put all my time, energy, and in this case, money, into to succeed. One noticeable difference this time was that we could avoid having to report on the trip when we returned. Normally, everybody knows exactly what has happened before we return and then it's all over the internet and in climbing magazines. Fair enough, as the brands need the publicity, but for me, as a filmmaker, the story is the most important aspect, so it does pain me that so much detail is already out there. It's nice this time that we've kept it all under wraps.  Nobody really knows what happened this time, which I really like, as it adds an element of uncertainty that's often missing in climbing and expedition films.

Why is it important to you that the North American premiere is at the Festival in Banff?

Banff is the obvious place for a film like this to have its North American premiere — always such an enthusiastic audience for mountain films and this film, more than any other I've made, would have mountain film written all the way through it if you cut it in half. Banff is also perhaps the only mountain festival on the circuit where you can have genuine interest from the larger network of film and broadcast. Many of the other festivals claim it but I think it's only actually true at Banff. I hope there are some big shot TV execs there that like what they see.

What have you got up your sleeve for your next project?

If I told you that, I'd have to have you killed.

Citadel is part of The Next Forty Years program on November 7, 8 p.m., Eric Harvie Theatre. For tickets and more information, call the Banff Centre Box Office at 1.800.413.8368.