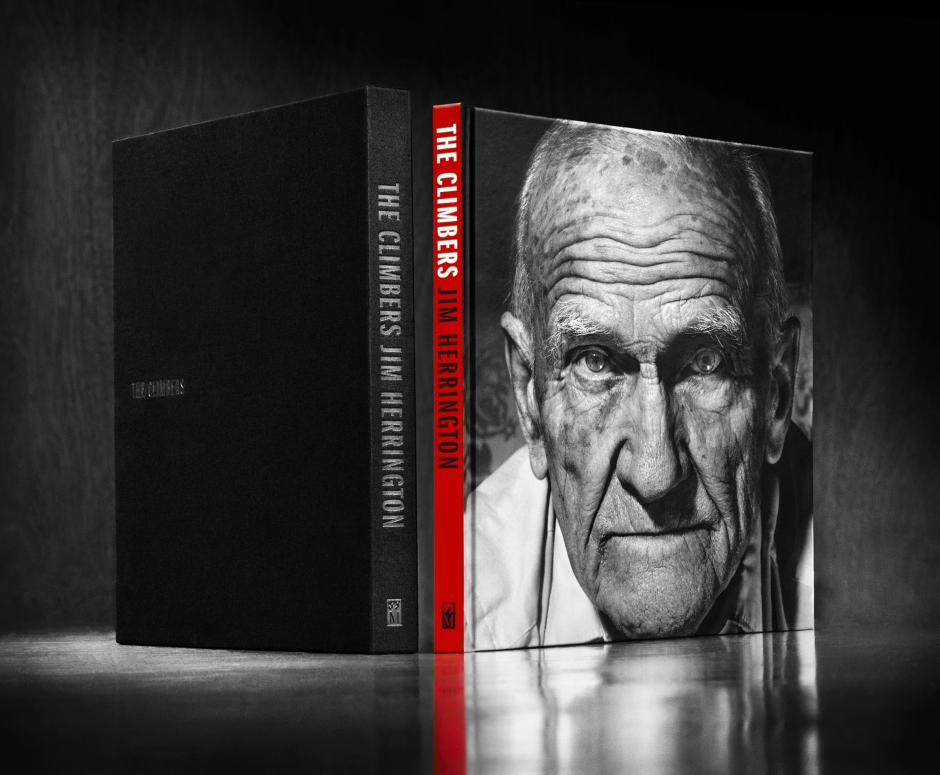 The Climbers by Jim Herrington

BANFF, AB. November 2, 2017 – The Banff Mountain Film and Book Festival is proud to announce Jim Herrington’s The Climbers as the Grand Prize winner of the 2017 Banff Mountain Book Competition.

For nearly two decades, professional photographer Jim Herrington has been working on a portrait series of influential rock and mountain climbers who, from roughly the 1930s to 1970s, used primitive gear along with their considerable wits, talent, and fortitude to tackle unscaled peaks around the world. Inspired by the Sierra Nevada routes he’d been climbing for more than a decade while living in Los Angeles, Herrington set out in the 1990s to photograph the range’s pioneering climbers.

The next two decades had the North Carolinian globe-trotting from California to Kathmandu to capture the world’s “Golden Age” alpinists, including Beckey, Cassin, Messner, and Robbins, who had defined the sport earlier in the century. Herrington managed to achieve this alongside his day job photographing stars like Willie Nelson, Mick Jagger, and Dolly Parton.

Chosen from the best in mountain and adventure literature, mountain travel, mountain fiction, mountain image, mountain articles, mountain environment and natural history, mountaineering history, and guidebooks, 171 book submissions from authors in 11 countries were honed down to a longlist of 28 finalists and from that list our 2017 jury determined category award winners.

“The portraits in The Climbers document in searing detail many of the preeminent founders of the sport,” said Banff Mountain Book Competition jury member, Ian Welsted. “Now aged beyond their most active years, the visible mortality and frailty of the subjects alerts us to a reality often glossed over by the dominant cult of youth in adventure sports.  As survivors of intense experiences, the effects of lives spent in pursuit of extremes is made obvious. Jim Herrington renders in images captured on nostalgic black and white film a simulacrum of the subjects' groundbreaking spirit. He adds: “We are fortunate to benefit from this effort by a photographer renowned for his portraiture of musical stars.  For at a time of explosive growth and public recognition why should the luminaries of climbing not receive this rock star treatment, as revealing and gritty as it may be?”

The 2017 Book Competition jury members are Mayan Smith-Gobat (NZ, climber and writer), David Stevenson (USA, author, climber and Director of Creative Writing and Literary Arts at the University of Alaska in Anchorage), and Ian Welsted (CAN, climber, writer and Piolet d’Or winner).

$2000 - Sponsored by the Whyte Museum of the Canadian Rockies
Art of Freedom: The Life and Climbs of Voytek Kurtyka
Bernadette McDonald, Rocky Mountain Books (CAN, 2017)

Banff Centre for Arts and Creativity

About Banff Mountain Film and Book Festival: Created 42 years ago, the Banff Mountain Film and Book Festival has become the premier event of its kind in the world. The nine-day Festival hosted by Banff Centre for Arts and Creativity in Banff, Canada, showcases the world’s best films, books and photographs on mountain subjects – climbing, culture, environment and natural history, exploration and adventure, wildlife, and sport – and attracts the biggest names in mountaineering, adventure filmmaking, and explorers as presenters and speakers. An international jury will also award over $50,000 in prizes for films and books submitted to this year’s Festival competitions.