Developing the First World: Exploring the Other Side of Good Intentions 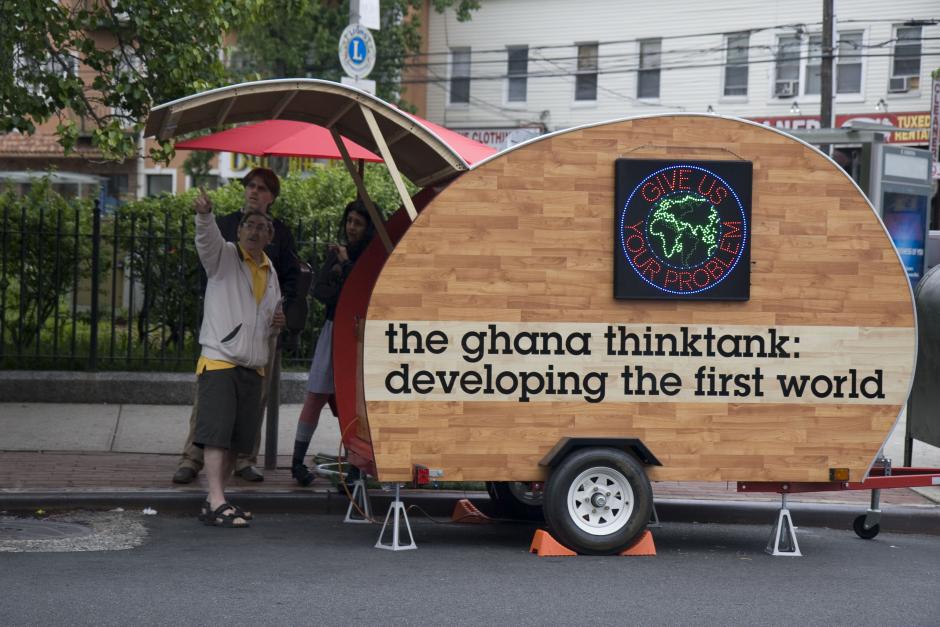 Ghana ThinkTank builds unique and fun structures to attract people to share their problems with the artist collective. Photo courtesy of Christopher Robbins.

The cooking hut, one of a cluster in a village in Benin, West Africa, was small and windowless, hot and choked with smoke. Yet women spent hours a day toiling inside.

A Peace Corps volunteer saw a solution. These mud and thatch houses could easily be adapted to have chimneys. So she set to work. Within a few days the chimneys were in place. Within a few weeks the malaria rates in the village had spiked.

The smoke had kept the mosquitoes away, a factor the American had not considered before wading in.

Artist Christopher Robbins used this example from his time in Benin during a Banff Centre Talk this winter to illustrate the kind of misguided ‘help’ he saw time and time again while working in the developing world.

His discomfort with imposing our culture on others was shared by John Ewing and Matey Odonkor. The three began the artist group Ghana ThinkTank in 2006 as a unique way of challenging the dynamic between the “first" and “third" worlds, and were joined by Carmen Montoya in 2009.

“I don’t mean to say development is not good, but clearly we can’t come in there with this mindset that we’re healing and saving because obviously the people affected by this have to be in control of it.” 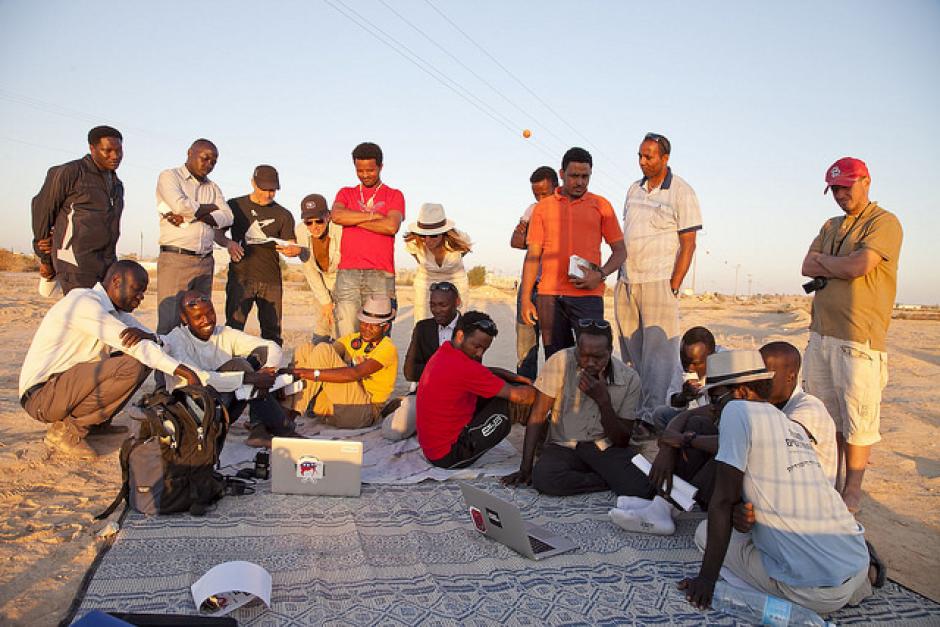 In a process Ghana ThinkTank calls “developing the first world,” the group collects problems from individuals in the so-called developed world and sends them to be solved by think tanks in the developing world.

These think tanks are community groups chosen to highlight cultural differences. In Ghana, it’s a group of bicycle mechanics, while El Salvador’s think tank is the staff of a rural radio station. In Israel, advice is dispensed by a group of Sudanese refugees. All of whom carefully consider the first-world problems and propose solutions.

In one of the group’s first projects, they worked out of a gallery in Westport, Connecticut collecting problems from some of America’s whitest and wealthiest. This lack of diversity was an oft repeated problem and one that group sent to its think tanks. El Salvador responded. The solution was to host a cocktail party at the gallery and invite day labourers, paid their regular rate, to come eat sushi, drink wine, and socialize.

Robbins says Ghana ThinkTank is dedicated to enacting the suggested solutions, “regardless of how brilliant or impractical” they may be, because that was how international aid has traditionally been meted out.

“This practice is not gentle and it didn’t necessarily start as a way to actually solve problems,” says Robbins. “It’s about revealing what we don’t know, but we think we do.” 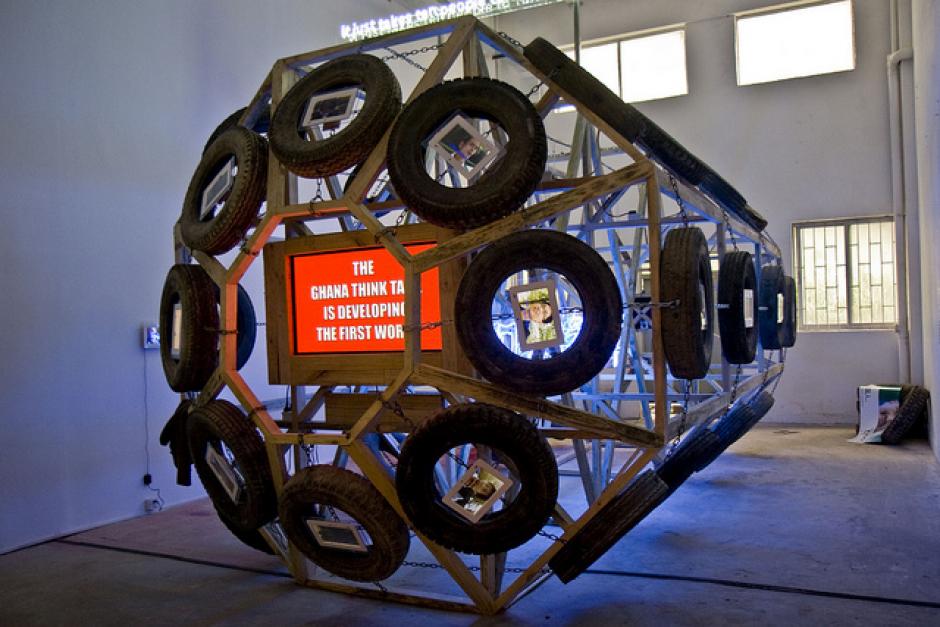 The method works both to challenge the at-times uninformed aid that Robbins saw in his Peace Corps days as well as highlight wrong assumptions about the third world. For instance, when the group took its project to the Netherlands and for the first time found people unwilling to complain.

“The lefty-ist, most sensitive, self-reflexive person was saying ‘how could I possibly send my problems to [those] who have so many more serious problems’,” Robbins says. “It was couched in this super sensitive context that was actually incredibly infantilizing.”

But since that was the problem they were given, that’s what they sent to their think tanks. Robbins says despite the offensive question, he was surprised by the reaction. In a video response, a woman in Gaza speaks to the Dutch about her experience.

“There are always so many problems to solve, so we’re kind of accustom to being problem-solvers. It’s how we like to think of ourselves.”

While he doesn’t claim that Ghana ThinkTank's earlier projects necessarily provided long-term solutions, Robbins says the group achieved something: “It’s taking something that’s right there and looking at it in a different way.”

Early projects brought new perspectives to problems ranging from chemical run-off to yapping dogs, but the idea had originated in relation to the world of development and the group had a desire do more than point fingers. So they started to extend their projects from showing solutions in gallery installations for three to six months to projects working towards development goals on aid industry timelines of three or more years. 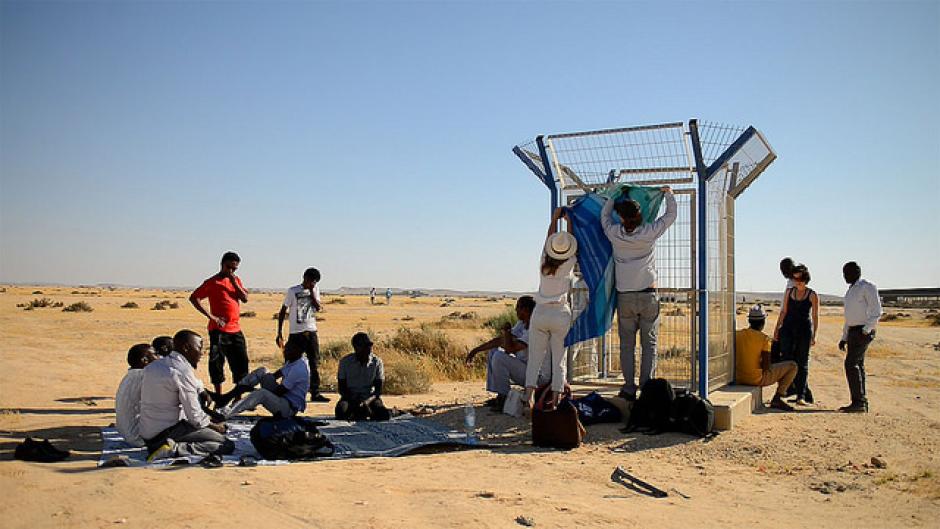 Ghana ThinkTank visits their think tank at the Holot Detention Center, a camp with many African asylum seekers in the Negev desert. Photo courtesy of Christopher Robbins.

This year, the group is celebrating its tenth anniversary with two long-term projects: a problem-swap between self-appointed border control and recently deported immigrants along the Mexican-U.S.A. border, and a building project in Detroit meant to combat feelings of isolation in American life.

The housing development will be styled after a Moroccan riad, with a single entrance for multiple family dwellings. While the solution for Detroit comes from Morocco, Ghana ThinkTank is currently working with local organizations to purchase and develop the property into a land trust.

“‘Developing the first world’ sounds witty when you do it in Westport. When you do it in Detroit, it’s offensive because it starts to feel a bit true,” says Robbins. “So we’re now in a position of our project folding back on itself until it’s definitely problematic.”

After a decade with Ghana ThinkTank, Robbins knows a lot about the pitfalls of development and hopes industries outside the art world will cannibalize their ideas for what works. Both current projects are centred in the U.S. because the group recognizes that there needs to be a shift in the belief that only the first world can dispense aid. Robbins believes if the Western world starts to genuinely ask countries they used to develop for help, then international aid will have done its job. And so will have Ghana ThinkTank.

To learn more listen to our Banff Centre Talks podcast with Christopher Robbins: