'Digital Luthier' Alex Burton on Designing the Instrument of the Future 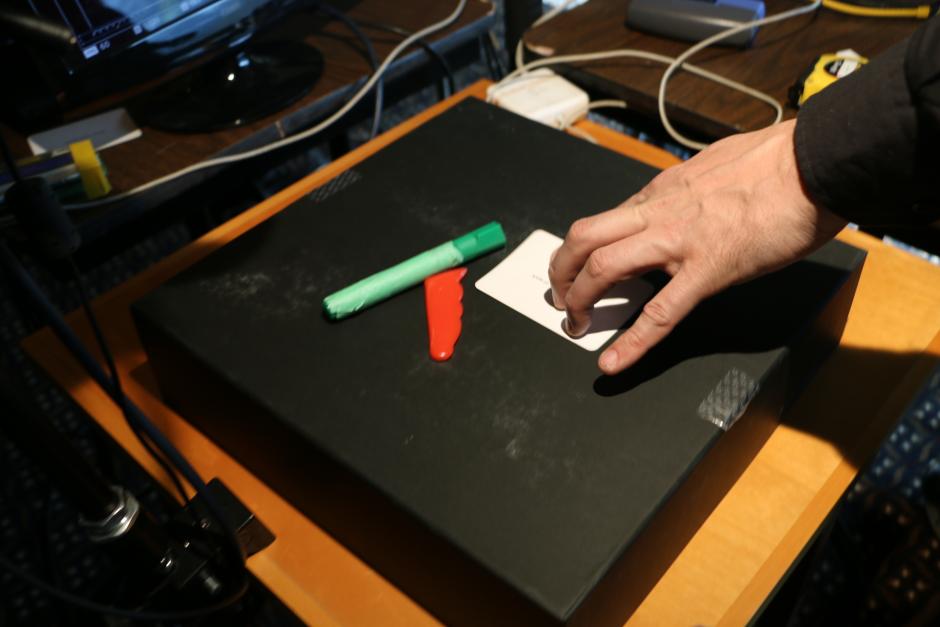 Alex Burton arranges a few test objects under the camera of his new instrument, which creates sound based on the colour, shape and movement of objects it "sees."

In a quiet studio in Banff Centre’s music building, Alex Burton is creating his latest composition with a handful of office supplies.

He waves a green highlighter under a camera mounted on a thin metal arm. The speakers in the room let out a sort of digital “whoosh,” sounding like someone just punched a computer in the solar plexus.

In the corner of a monitor on the other side of the room, a video of the waving highlighter replays on a loop, the whoosh sound creating a steady beat. With a few taps to the keyboard, Burton adds a second highlighter loop, adjusting the pitch and speed of the sound slightly. Then another. Then he adds a few other sounds by tossing more random objects under the camera - a deep thrum from a bit of red plastic, and a high-pitched crackle from a white plastic card.

Soon after the objects are teased under the camera’s lens, the studio is filled with a driving electronic noise, created by those three objects and his invention.

Burton, who calls himself a “digital luthier,” and his creative partner, Julien Roy, are crafting a new musical instrument. But instead of the using strings or reeds to work, it uses software to assign sounds to objects placed under its camera “eye.” Burton’s creation takes everything from colour, to shape, to movement into account. So, a green highlighter waved under the device creates a wildly different sound than the stationary, oddly-shaped bit of red plastic.

“[I'm] very interested in exposing the connection between the sound source and the sound itself,” says the Montreal-based artist.

It’s an idea the pair has been fascinated with for a while. Burton worked on a similar instrument in the past, which used the colour pattern on a Rubik’s Cube to play sound. Twisting the cube would change which colours were visible and, thus, which sounds would play.

But this new iteration is far more complex: it not only uses colour, but also the position of the object and the speed it is moving to create the pitch and timbre of the sound.

“It’s much more open and can be used in many different ways,” he says.

The unnamed instrument is the result of creative coding, several weeks of which were done during the Convergence electronic music residency at Banff Centre this March. Most of it has been spent on the dirty work of designing and creating the instrument, forming the backbone that will allow the pair to actually use it to perform.

The ultimate goal, Burton says, is to create something that extends farther than Roy and himself. Until someone is able to use it to create their own unique compositions, Burton says it won’t truly be an instrument in his eyes.

“For me, a criteria to say that it's really an instrument [is] if it allows things that even I do not plan for … it means that there is potential there that. Clearly did not exist before,” he says.

It’s that potential that is the real motivation behind the project. Burton and Roy have designed the instrument to be open and flexible. While they have assigned sounds to the different variables that the software analyzes, put simply, Burton doesn’t want to declare what the colour red sounds like — instead, he wants to give other performers the ability to define their own red sound.

In that way, he isn’t creating a single work of art. Instead, he is putting his mark on countless potential creations — anything that can, or will, be performed on his new instrument. As he puts it, half-joking, “creat[ing] a glimpse of infinity.”

“I think it's more important to invent new territories than to take snapshots of them,” he said. 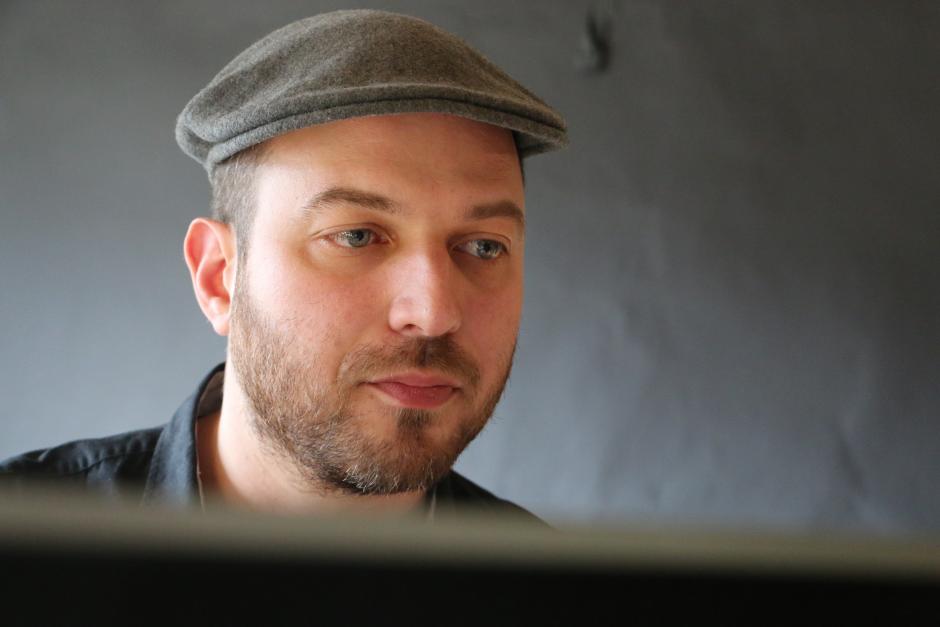 Julien Roy  (pictured) and Burton were at the Banff Centre's Convergence residency to continue work on developing the project.

But to reach that potential, he needs others to learn his instrument. Which he admits is no easy task. When people think of the word “instrument,” they aren’t likely to think of the camera/computer combo that Burton and Roy have hacked together.

But Burton sees his creation as being no different than any other instrument — they were all created to achieve sounds that weren’t possible before, and at one time were all considered cutting-edge technology.

He points out that pianos couldn’t exist without advancements in metallurgy, and tubas had to wait for the invention of pistons. His work is an extension of that tradition.

“Nobody really gives a thought to why we have a complicated machine like a saxophone in our hands. It’s because they solved a problem that existed in the time they were [created],” Burton said.

Still, it can be frustrating to create a new instrument. Burton admits that he likely won’t see his creation in an orchestra anytime soon. It can take decades of practice for someone to become skilled enough with an instrument before they are able to master the skill. While that might be manageable for a violinist, who can study and practice with older works, it’s not the same for a brand new instrument that has no history, no traditions and is played only by its creators.

As well, it can be hard to keep audiences interested in an nascent instrument. Burton ran into a similar issue with one of his past creations, an installation made up of dozens of lightbulbs that could be used to produce sound. He and other electronic artists used the lights to create short sound pieces. However, since there are only so many concerts and festivals for electronic artists, novelty soon runs out with audiences.

“People expect new stuff. If we go back there and show off the light bulbs, but more polished, it won’t go over well. The audience wants something new,” he said.

“[But] if you spend six months of your life learning to play light bulbs, you still need to eat.”

Burton is still dedicated to his instrument, though. He will continue the tweaking and the coding, the minor adjustments and the major overhauls. All in the hopes that someone else will take up his creation and do something he would have never thought possible. 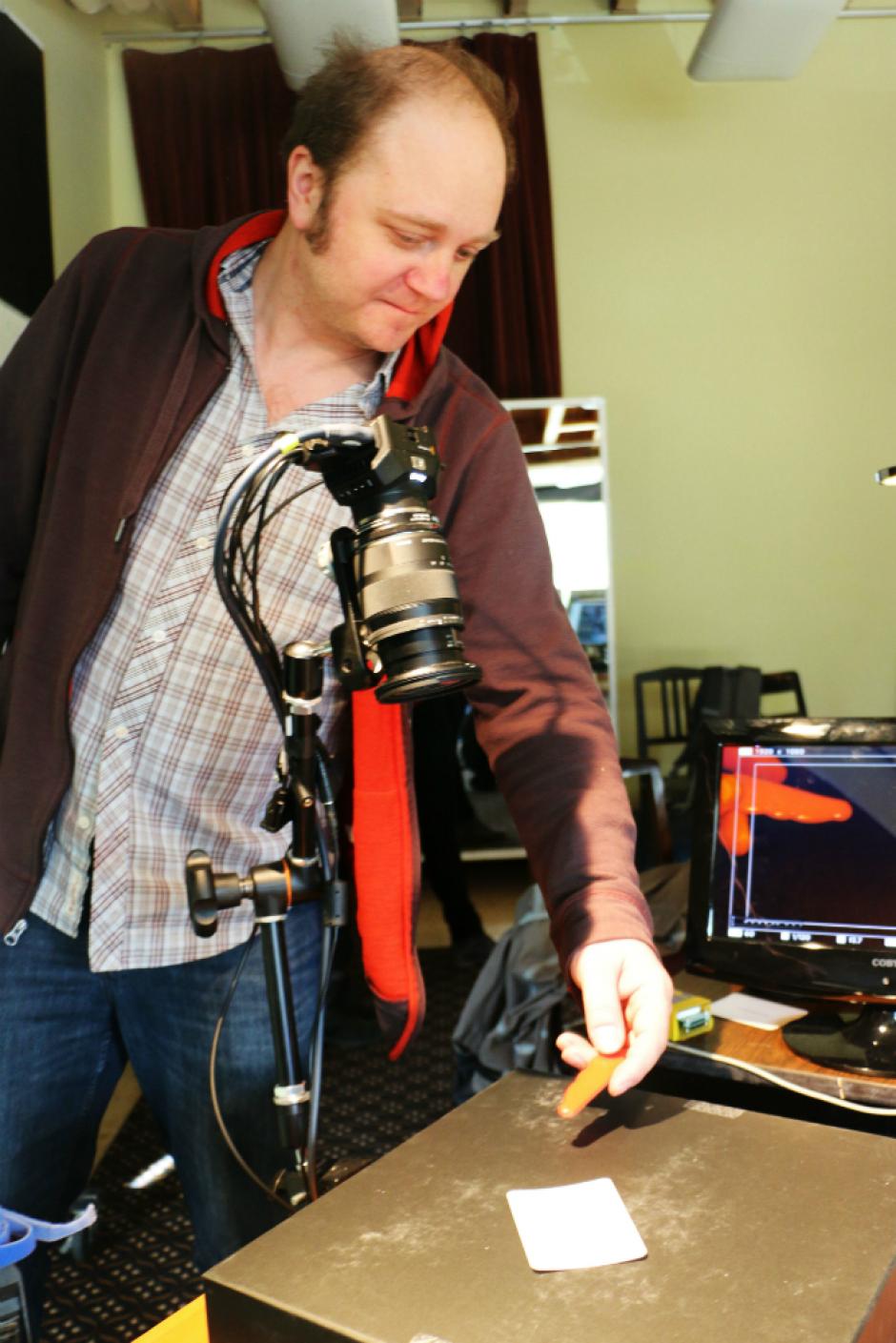 Burton's ultimate hope is that other artists will use his creation for their own compositions -- only then, he says, will it truly become an instrument.