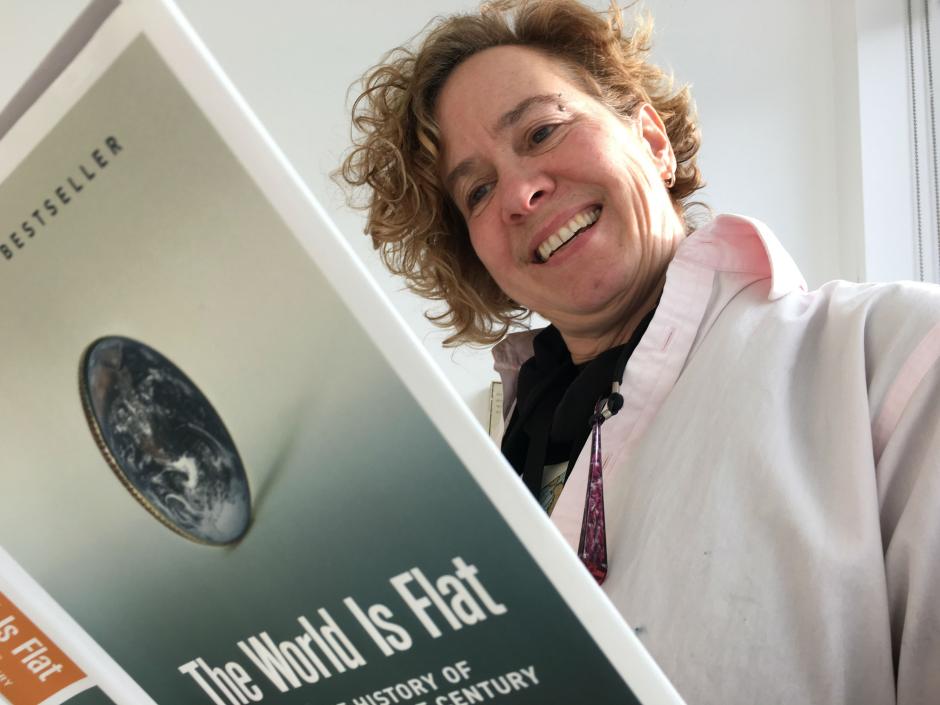 Kay Burns has a bit of a problem with authority.

Or rather, she has a problem with the way people surrender to it.

Like the bogus crime warnings emailed by our collective aunts, or the miracle weight-loss snake oil hawked by daytime TV hucksters— the little lies we know we push back against, but let ourselves believe.

[It’s] that kind of the ambiguous space between what we accept as truth and what we question,” says the Newfoundland-based artist.

“To a certain extent, [it's] to poke fun at contemporary society's gullibility about certain things. I mean, all you've got to do is look on Facebook at the posting of ridiculous articles that people respond to with the utmost conviction.”

That fascination with fabrication forms the backbone of much of Burns’ work.

Take her series of historical walking tours: after hours of long research, she takes her audience on a journey through the history of a place and some of its most compelling residents. Nevermind that the facts she offers are made up and the people never existed — to Burns, a little lying can go a long way to exposing the “underbelly” of a place that’s papered over by tourism boards and civic boosters.

“I think it's much more fascinating than what people try to present about a place,” she says.

“I think in a lot of ways, the information that's presented about a place is where the falsehoods lie.”

This winter, Burns served as the lead liar for “Truth, Lies and Lore,” a Visual + Digital Arts residency at the Banff Centre, where artists explored the question of what is real and what isn’t.

During the six-week residency, Burns worked with Iris Taylor, her long-time collaborator. Taylor is an independent researcher and the driving force behind of the Flat Earth Society of Canada, which is pretty much as it sounds. In one of its pamphlets, above a drawing of a cube-shaped Earth, the group writes it works to “combat the fallacious deification of the sphere which … has warped western thought.” 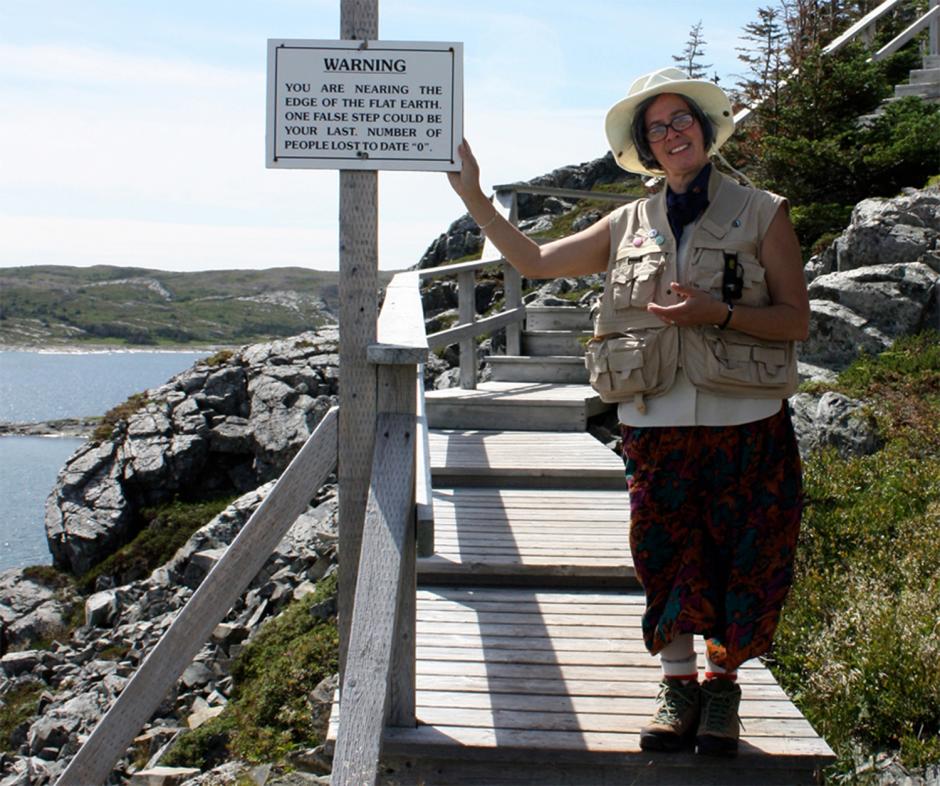 Much of Iris' research has been centred around Fogo Island, Newfoundland -- considered to be one of the corners of a flat earth, if you believe Iris. (Photo: Kay Burns)

Iris Taylor is deceptive. She may look the part of a mousy librarian in her shapeless sweaters and severe haircut. But she’s a tireless warrior in the battle against round-earthism. She’s passionate. She’s confident.

And she’s just another one of Burns’ lies.

“Iris sort of exists once the wig and the glasses go on,” the artist says about her alter ego.

“I do think of her as something quite separate from me. But at the same time, I find problems articulating what's different about her.”

Burns can’t remember when she first heard about the Flat Earth Society of Canada. Started by a handful of cheeky professors from the University of New Brunswick in the 1970s, it stayed afloat for a few years before collapsing.

Eventually, Burns resurrected the society — born out of a trunk full of Flat Earth “artifacts” allegedly found in a crawl space in Newfoundland. That’s also when Taylor came to be.

Burns isn’t actually out to dupe anyone. Nor does she actually hope to change minds about the Earth’s shape.

Instead, she wants people to really think about what truth actually is, and how they formed their deepest-held beliefs.

“I'm a skeptic, I think. On the one hand, I kind of wonder if maybe I'm just jaded, but I think it's actually just skepticism about a lot of things,” she says.

It’s something she doesn’t think she could pull off just as herself. Taylor’s over-the-top persona and beliefs create a bit of space, allowing Burns to tackle the conventional wisdom on weighty topics, like environmentalism and our relationship with the natural world.

But Taylor is also a liar, in her own way. On one hand, she’s encouraging people to reject the authority of scientists (and pretty much everyone else) who say the earth is round. But in the same breath, she’s trying to set herself up as a uniquely trustworthy authority. It’s a contradictory message: don’t believe everything you hear, unless you hear it from me.

For an imaginary construct, Taylor is doing quite well for herself. She has plans to open a Flat Earth Society museum in Fogo Island, Newfoundland — which itself is supposed to be one of the four corners of the flat earth.

The museum will house many of the artifacts that Taylor has “found” on her quest for a flatter truth, with more added as time goes on.

At the same time that Taylor is working on her creation, Burns continues to work on hers.

“Iris is never finished. Unless I decide this practice will no longer be part of my art.

Then I will have to find a way for Iris to meet her demise." 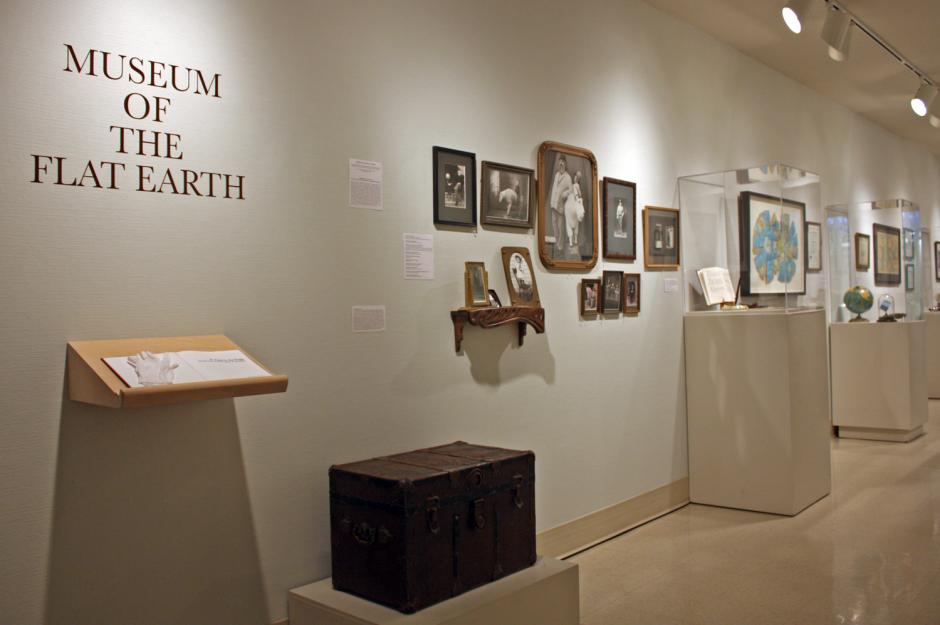 Some of the artifacts that will make up Burns' Flat Earth Museum, on display at the Beaverbrook Art Gallery in Fredericton. (Photo: Kay Burns)