Even if you’ve never been to Yosemite National Park, or even California, you’ve probably seen the face it sits on. El Capitan, with its steep granite cliffs, has graced postcards and magazine covers, been stamped into coins and captured on film countless times.

And The Nose, one of the most famous routes in rock climbing, crawls along El Capitan’s prominent prow.

Sandy Russell wanted to change that. She wondered if there was some way non-climbers to tour the entire route — all 3,000 feet from El Cap’s base to the summit.

Russell didn’t come up with an idea out of the blue: she’s part of the Google Maps team, the same people who created Street View to provide photo tours of places all over the world.

So she started planning out the company’s first vertical Street View.

In November, at a presentation at the Banff Mountain Film and Book Festival, Russell was joined by climbers Alex Honnold and Tommy Caldwell to reveal just how they pulled it off.

The desire to bring Street View to Yosemite started in an unlikely place: a tree-less, blacktop playground behind a school in Los Angeles. Years before she started her work at Google, Russell was a teacher at the school.

As someone who grew up with a love of hiking at the outdoors, she dedicated herself to connecting her students with the natural world.

“The look on a seven-year-old’s face when they see the ocean for the first time is mind-boggling,” she says.

That desire continued when she joined up with Google. Russell started up with the Street Treks team, which is tasked with mapping out more remote places around the world.

“The question was ‘how are we going to get this thing to the top of El Cap?’” - Josh Lowell, climbing photographer/videographer

Cataloging El Capitan would be more than a physical challenge. Google’s 360 degree camera had been attached to cars, rafts, bicycles and backpacks. But at that point, it had always stayed relatively close to the ground.

So, Russell reached out to Josh Lowell, whose Big Up Productions had been filming climbers for 15 years, to see if it could be done.

Lowell’s first step was to find a camera that worked for climbing. So, he and his brother Brett Lowell took Google’s Street View camera for a spin on the climbing wall at the company’s HQ.

The camera itself looks a bit like one of those novelty plasma orbs that one finds in novelty stores and cheap sci-fi movie sets. It was mounted on top of a large backpack, which processed and uploaded the images as they were taken.

“The question was ‘how are we going to get this thing to the top of El Cap?’” he says.

It didn’t take long to see that they couldn’t. At 45 pounds, it was far too heavy and cumbersome to climb with.

Instead, the team decided to use two cameras. One was Google’s Interspace rig: basically a DSLR attached to a modified tripod that the company used to shoot inside buildings.

The second was a lighter, McGyvered version of the 360 camera based on something a Google engineer (and rock climber) designed in his spare time — “basically a ball of GoPros,” Lowell says, able to shoot six different angles at the same time.

It seemed to work on the wall. But before they could go forward, it would need to be tested on the actual rock. Luckily, just a stone’s throw from The Nose, two other climbers trying to make history would prove to be the perfect test case.

Lynn Hill, who was the first person to free climb The Nose in 1993, helped capture some of the dramatic panoramas (Google Street Treks)

Tested on the Dawn Wall

“I sort of weaseled my way on to the team,” Tommy Caldwell says, with a bit of a smirk.

At the same time that the Google team was trying to figure out the technology, Caldwell and Kevin Jorgeson were in the midst of completing the first free climb of El Cap’s Dawn Wall. The struggle up the sheer cliffs, what Caldwell calls “the greatest athletic challenge of my life,” took the pair 19 days.

Much of that was downtime. The pair would have to rest up and heal between pitches, sometimes up to 15 hours a day. So the Street View team sent the gear up to the climbers, who used the time to play around with the different cameras and give them a thorough field test.

After days on the Dawn Wall, the team had a better idea of what their gear could do. They finally decided to do two different climbs. One would use the Interspace camera to take 20 high-quality panoramas of Caldwell, Honnold and Lynn Hill —  the first person to free climb The Nose in 1993 —  on iconic spots on the route.

The second climb would have Honnold scale El Capitan with the Go-Pro ball, recording every inch of the route.

“We enlisted the boldest, bravest, fastest, most badass climber we could find,” Lowell says.

Still, even with a team of experienced climbers and the tested technology, the project wasn’t a sure thing. The team decided to take the photos in January, when there were fewer people on the route. They also had a dubious ally on their side, as the drought in California had kept ice off of the face of El Capitan.

Still, with only days before the climb, they weren’t sure the weather would cooperate. Luckily, they were able to start on schedule.

For the panoramas, the climbers started at the top of El Cap and climbed down until they reached the points where they wanted to shoot. The Interspace camera would take eight shots at each location, showing the climbers doing moves at specific spots on the Nose —  places like the King Swing, the Great Roof and the Stovelegs.

“It was a surprisingly good challenge to climb The Nose without moving side-to-side. It was kind of awkward.” - Alex Honnold, climber

The photos were then stitched together into the panoramas, which meant the photogs working the camera had to get creative to stay out of the shots — dodging, ducking and dangling from ropes.

The team took the first series of shots and then climbed back up, where a solar-powered laptop was ready to stitch the photos together.

“When I reached out to Josh, I didn’t think this would really happen,” Russell says.

Getting the Street View shots of The Nose would prove to be a different challenge. The Interspace rig worked well for a couple dozen panoramas, but mapping out the entirety of The Nose that way would take months. Instead, Honnold would climb the whole route with the smaller GoPro camera sticking out of a modified backpack.

Honnold is no stranger to the route; in 2012, he climbed it in just over two and a half hours with Hans Florine, a record that still stands.

But the camera made it more difficult. It wasn’t heavy, but was cumbersome enough to  severely restrict his movements.

The team had built three of the GoPro cameras, each with a battery life of about 90 minutes. But the backpack slowed Honnold down enough that he couldn’t get to the top before they ran out of juice. So, it became two climbs, tackling the top part of the route first before doing the bottom on the second day.

Aside from keeping the batteries topped off, Honnold found it difficult to keep from smashing the camera against the rocks while climbing.

“It was a surprisingly good challenge to climb The Nose without moving side-to-side,” Honnold laughs.

“It was kind of awkward.”

Lowell’s brother, Brett, was with Honnold for the climb and had to provide a steady supply of replacement lenses. 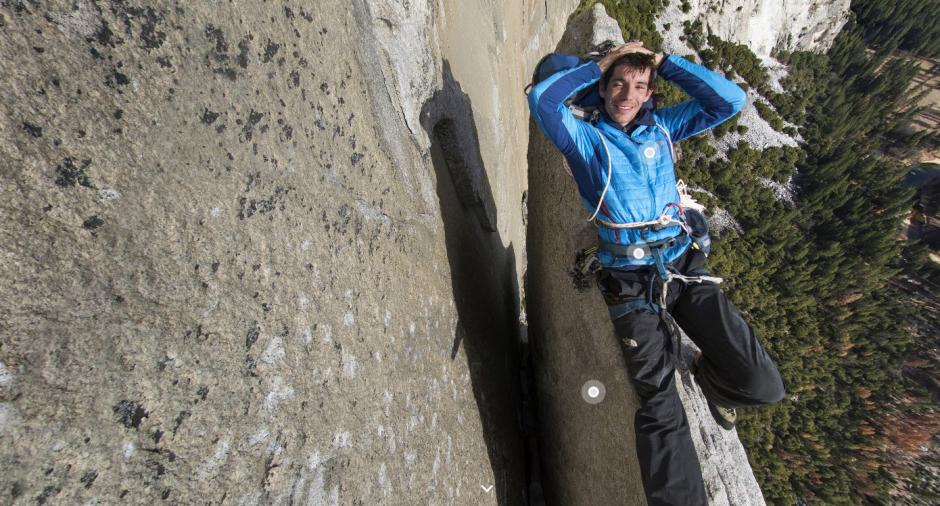 The panoramas capture climbers on some of The Nose's most iconic spots -- like Alex relaxing on the Texas Flake. (Google Street Treks)

Luckily, the on-the-wall repairs were enough to see them through. In the end, the team had pulled it off. They had hundreds of images showing every rock, cranny and crevice along The Nose’s 3,000-foot ascent.

More work had to be done, of course — the images from the makeshift camera had to be put together, and engineers had to make major changes to the way the Street View software works to flip it from the horizontal to the vertical.

In the end, Google ended up launching its Yosemite Trek project last summer. In addition to the panoramic shots and the street view, it also included information on some of the gear and techniques used by rock climbers, as well as videos on the environment and geology of Yosemite.

Russell says a video detailing the project has been watched more than 13 million times, with millions more on both the Street View and Panoramas.

While the technical lessons gleaned from capturing the climb were invaluable, according to the team, Russell thinks the real success is showing the familiar El Capitan to people in a way they’ve never seen before.

The company is now partnering with NatureBridge, a California non-profit that educates children on the environment. They plan to give tours of Yosemite and El Cap to teach them about the park and climbing.

“The really important part is how we give that glimpse into the community,” she says. 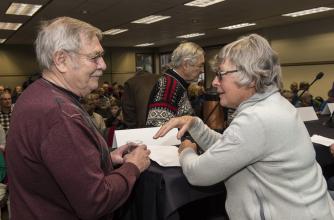 Mountains inspire stories. We asked five old-school storytellers to share what they seek in a good story and how to tell a good campfire tale.
Read More