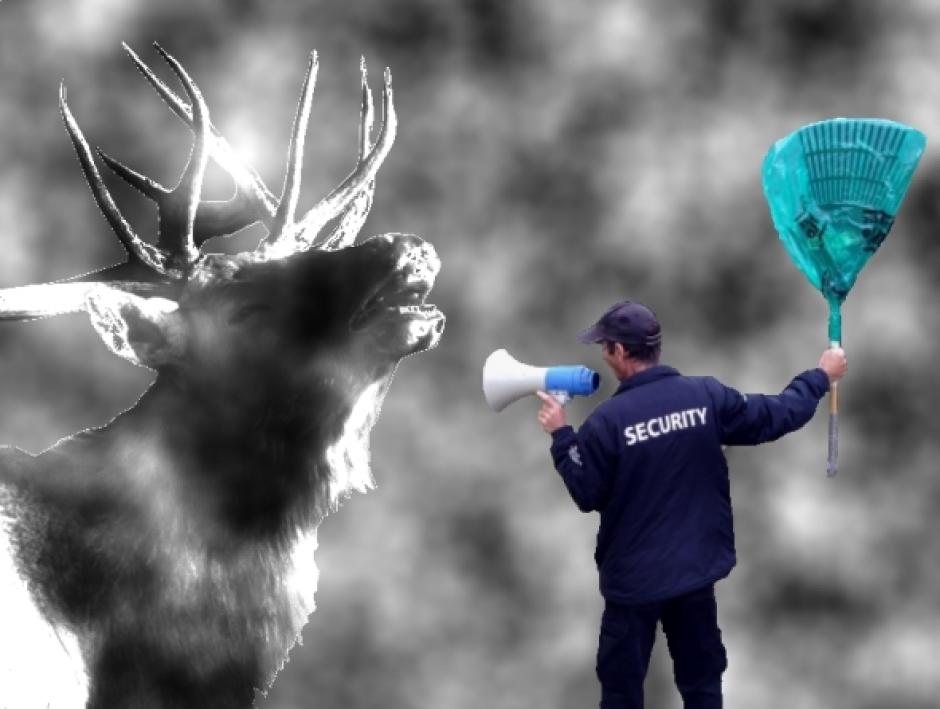 This is no joke. Illustration by Kristy Davison.

During rutting and calving seasons in the Fall and Spring, the number of elk sightings increases around The Banff Centre. Open areas, like the green space in front of the music building, allow them to see potential predators coming from a distance while keeping their backs to a wall to minimize surprise attacks. It’s a good place to be, if you're an elk.

Twenty years ago, the elk invasion had become so serious that a TBC Elk Action Plan was hatched. Options discussed with wardens included removing large trees to prevent pedestrians from being surprised by hidden elk, installing temporary electric fences, and placing canisters of artificial wolf scent in the woods surrounding the Leighton Studios. Security at the time offered to ferry nervous staff or visitors through elk herds to other buildings on campus.

Things have calmed down since then, but I caught a hot tip that our campus cowboys were wrangling the herds using only a hockey stick with a garbage bag tied to it and I felt compelled to investigate what sounded too good to be true. Crossing my fingers, I called up Alasdair “Grif” Griffith and Chris Furlan from Security who were prepared to divulge some of their tried-and-true tactics for cajoling the creatures off campus.

The security team was quick to correct my misconception about the hockey stick.

“It’s a rake we use, not a hockey stick,” Grif said as he pulled said tool out of the back of the security van. The rake, a remnant pilfered from the grounds crew's throw-away pile, had half of its tines missing and handle sawed or broken off, and was wrapped in a green garbage bag. The handle was covered in duct tape for added grip and greater protection from splinters.

“I mean, the [park]wardens use a hockey stick and it’s the same principle. It’s just that the rake, it’s got more area. And so you can sometimes make a bigger or a louder noise with it,” Chris explained.

“So you think the rake is better than the hockey stick?” I asked.

“In my opinion, anyways.”

Their Hooves Are Sharp Enough to Take Your Head Off

“Rule number one: never take your eye off the bull,” Chris informs me. “And number two is – very important – never get between the bull and the cows. They’ve got no regrets about tramplin’ ya. And there’s a strategy to moving them: before you go into it, you take a look at where they are and you decide where you want to move them to. And you move them in that direction, but you have to be careful not to chase them into people.”

Grif adds, “The hard bit is if they’re by a door or if you move them and then they run by a door.” Apparently the door to The Club is a notorious target for elk roam-bys; it’s a bit of a landscape pinch-point, and they tend to run towards it when they get spooked. We suggest you look both ways before you step outside after a show.

The elk aren’t even the worst thing. The deer can be even more dangerous. According to Chris, “They’re very cute and stuff, but you get too close, if they’re cornered, what they do is they rear up and they kick out with their hooves. Their hooves are sharp enough to take your head off.”

Another way to protect yourself from elk and deer encounters, Grif says, is to “Have a little look at what’s around you. The other problem we have on campus is people walking around with their phone out. Elk can be literally as close as we are standing now, and you just wander straight by them with your text messaging and looking up Facebook and whatnot.”

On an average day during the rut, security can be out on campus moving elk up to three or four times. Ideally, they like to go wrangling in a group of three, but sometimes, depending on who is available, they have to go it alone. That could mean being one-on-one with a hormonal bull elk or a whole herd of jumpy females. How do these guys keep their cool when approaching a 450lb cow or (up to) 700lb Rocky Mountain bull elk, I wondered.

At this point, Grif and Chris calmly began to describe what has to be the most mythical four-legged horned beast to have ever inhabited the Rockies, let alone The Banff Centre.

“There’s one in particular who’s huge. I mean, I don’t know what he must weigh. He must be…” Grif faded as the blood drained from his face.