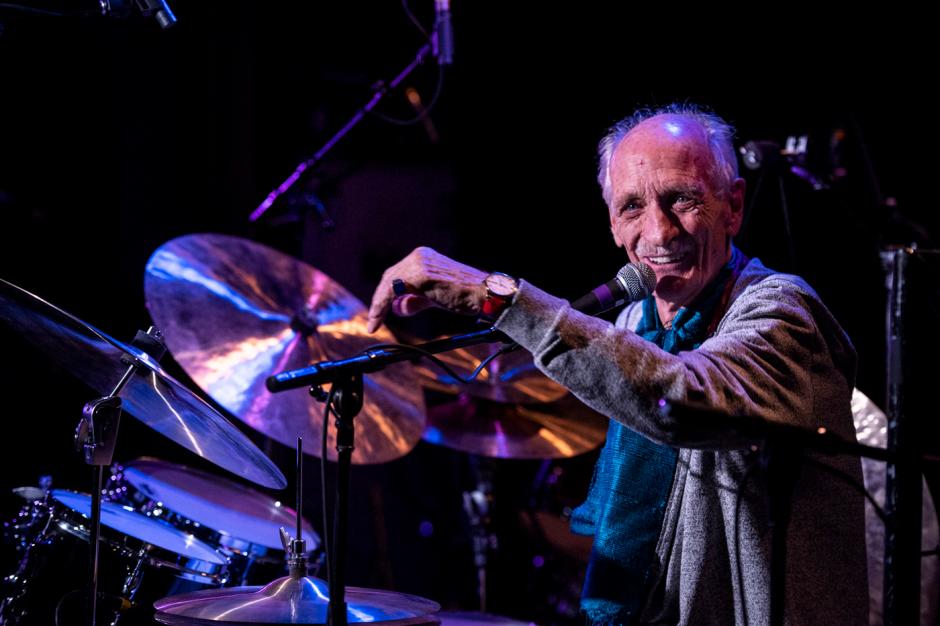 Jerry Granelli in The Club at Banff Centre

Jerry Granelli is a drummer, a Buddhist, a teacher, a painter, and a self described “warrior artist.” His work has spanned the majority of his soon to be 80 years on this earth. He’s a beautiful soul with puckish eyes that never reveal his age. I see in him at 80 the same curiosity I see in my two young sons.

Jerry joined Banff Centre for almost a month this fall providing mentorship within our Banff Musicians in Residence Program and performing with his trio in one of his more well-known projects, music from A Charlie Brown Christmas. I had the distinct pleasure of speaking with Jerry from his home in Halifax this summer in between his busy touring schedule — he was off to China to teach and perform a couple days after our conversation. I wanted to explore his ideas of what it means to be a “warrior artist” and, after over 70 years of playing, how he reflects that experience in his role as a mentor.

For Jerry the concept of the “warrior artist” stems from his involvement with Buddhism (which he began practicing in the late 1970s and continues to practice) as well as his own interest in the role of the artist in society. The idea of warriorship concerns “how you help the world and how you look at [the world]” and as a reflection of our current reality through art.

Jerry points out that when you begin to look back at the history of the role of the artist in society, as well as the role of the warrior, things have “become perverted.” What was once simply the ability to be an artist is now focused on making it your “career” rather than simply “your life.”

When exploring the idea of the warrior artist of the past, Jerry looks to Indigenous traditions of warriors whose roles were “not to reject fighting or war, when needed, but their primary definition was service [to the community].” When looking to many Eastern traditions, warriors were writers, artists, calligraphers, and poets. As Jerry points out it wasn’t called Martial Arts for nothing!

“You have to bear witness, you have to stand for your work.”

As perspectives on how a warrior can serve have changed, this has affected society’s relationship with the concept of artist as warrior. However, if we look to the past, we’re able to see reflected this noble way of the artist. This is where Jerry begins with many of his students.

”At this point most people are younger than I am,” admits Jerry, and because of this their questions about what it means to be an artist may be different from his experience, but he wants to mentor them in a way that imparts a duty of service to their community as part of their learning.

When it comes to the idea of the artist serving their communities, Jerry believes “it’s time to really have a good dialogue.” Jerry wants his time at Banff Centre as a mentor to start that dialogue and help artists prepare to see their work through the “cold hard reality” in which we currently exist.

“It’s a revolutionary act, at some level, to be an artist at this time,” says Jerry. “You have to bear witness, you have to stand for your work.” This requires discipline to learn your craft, to be open, and to be curious about what musicians can do. This comes from Jerry’s own deep curiosity about who he’s working with, either in a mentor relationship or on stage.

The way of the artist is much closer to the way of the warrior than we sometimes believe. Jerry Granelli is a musician with a deep sense of purpose and he wants to share that with everyone he comes in contact with. Either as a fellow musician or a fan, seeing Jerry will leave you uplifted, and hopefully curious about how artists and audiences can be warriors, and can help shape the world.