Eric San, a.k.a scratch-DJ Kid Koala, is embarking on something wild.

The master of turntables is taking a novel he wrote to the theatrical stage in a move that combines puppeteering, cinematography, chamber music, and DJing. By cleverly intertwining theatre, visual art, and live-action film, the audience will experience a theatre show on stage that is also filmed, and edited live onto projected screens.

“The idea is that you’re mesmerized by how the show is being done, but then also see the result at the same time in film,” says San. 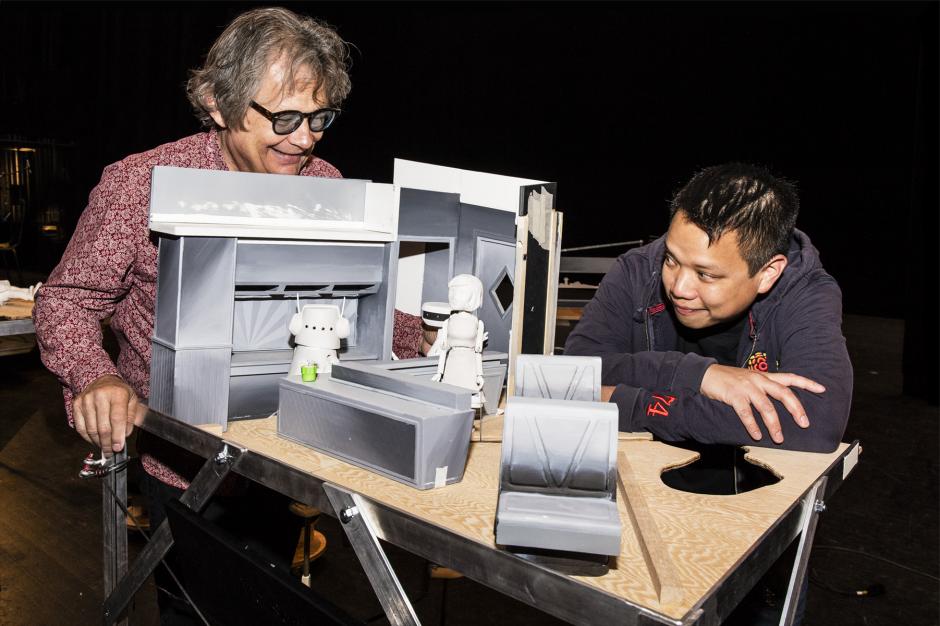 “It’s a dangerous move for sure,” admits San, in the lobby of the Eric Harvie Theatre where he is preparing for this Saturday’s premiere. Nufonia Must Fall is a project that sees the characters from his illustrated novel (and accompanying soundtrack) come to life in miniature sets built to recreate each scene from his book.

San is not a lone warrior in this ambitious task – he has brought acclaimed production designer K.K. Barratt (best known for his work on the Oscar-nominated film Her, Where the Wild Things Are and Being John Malkovich) and the prestigious Afiara String Quartet on board to boost the creative output of the show.

The Canadian musician describes Barrett as a “fearless director.”

“I would have had multiple anxiety attacks by now if I was directing this myself,” says San. He also describes the addition of the Afiara Quartet as the “natural culmination of our two musical worlds.”

Nufonia Must Fall tells the story of a a lonely office girl and an out-of-work robot who fall in love. Bringing the book to life seemed to be a pretty organic process for the musical virtuoso.

“When I wrote the novel back in 2003 it was like a paperback silent film, hearkening back to the Charlie Chaplin style of film that I grew up watching. So there was always a very cinematic side to the intention of the story and I can’t help but think of strings when I think of cinematic music.”

And in an effort to make this live experiment as exciting as possible, San has left parts of the score up to the imagination of the Afiara String Quartet each night. A risky move, some might say.

“I wanted this show to be an organism – something that would live and would change each night, and grow. So we intentionally left certain parts open to interpretation. K.K. and I thought, at some point, you need to discard the charts and watch what the puppeteers are doing.”

Barrett says he hopes the  process of seeing the camera go from set to set on stage, resulting in a live film, will be “a joy for the audience.”

“Hopefully the audience will be able to either lose themselves in the screen, or look down and see that Eric is doing something cool on the turntables, or that the puppeteers just moved to the other set or maybe they just get immersed in the musicianship.”

Part of the entertainment for the audience should be the knowledge that there is no “take two” if something goes wrong, says Barrett.

“I wouldn’t mind if there was a hiccup or two because it would bring the audience in with us and help them understand what we are pulling off. I think when you are doing anything live you need to see that you can fall, otherwise you’re not one with the performers.”

Nufonia Must Fall premieres at Banff Centre then moves on to Toronto’s Luminato Festival in June before embarking on an international tour in Europe, South America and Australia.