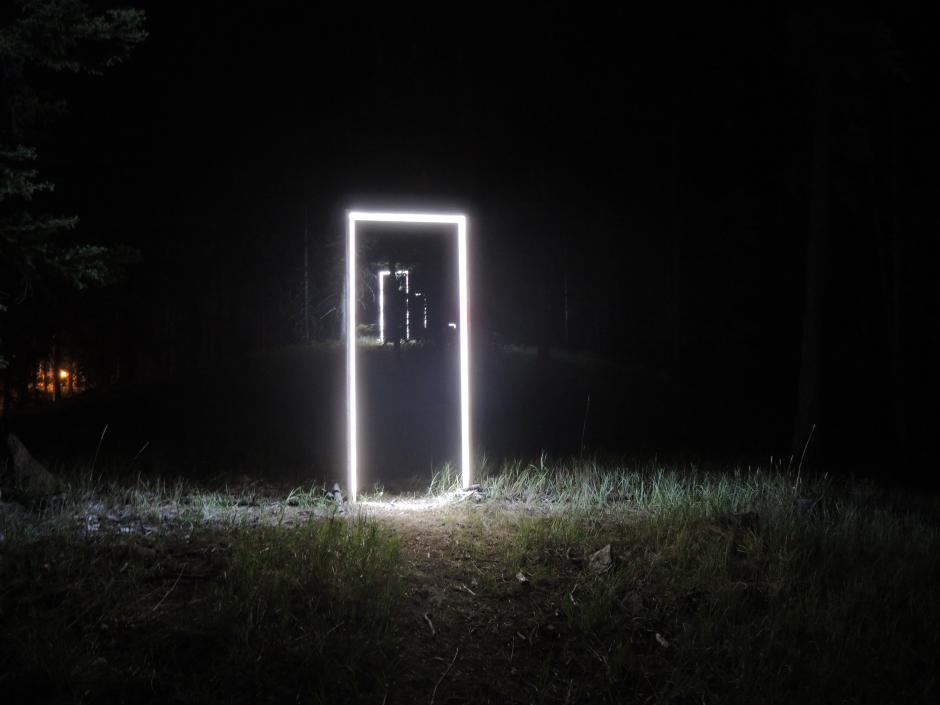 Picture this: you’re walking through a forest in the middle of the night. Your only source of light is a series of fluorescent doorways leading you down a path, deeper and deeper into the inky black. Around you are projected voices explaining the human relationship to darkness — “I actually feel really comfortable in the dark,” says one. It’s a total sensory experience. This is the space that artists Caitlind r.c. Brown and Wayne Garrett created for their participants. Watch:

Caitlind and Wayne are a visual arts duo based in Calgary. They’ve been dubbed “light artists” in the past as they often work with varying degrees of artificial light to create their pieces. Their latest interactive exhibit, seen above, is called The Deep Dark. It was created at Banff Centre.

Their most well-known work is an interactive sculpture called Cloud. It was created from 6,000 incandescent light bulbs that participants can turn on and off using dangling pull-strings. The piece has exhibited in many international galleries.

But despite the fact that light features prominently in their work, Caitlind and Wayne challenge the idea that they’re simply light artists playing with perception and participation. Caitlind’s curatorial project, Wreck City, is a community-based art experiment that transforms pre-demolition spaces into temporary art exhibits. It goes beyond public art to create a conversation about a deeper issue — in this case, gentrification and the shifting face of Calgary’s neighbourhoods.

Caitlind and Wayne took part in the Blueprint for Happiness residency at Banff Centre this fall. We asked them about public art, perceptions and working as a duo. 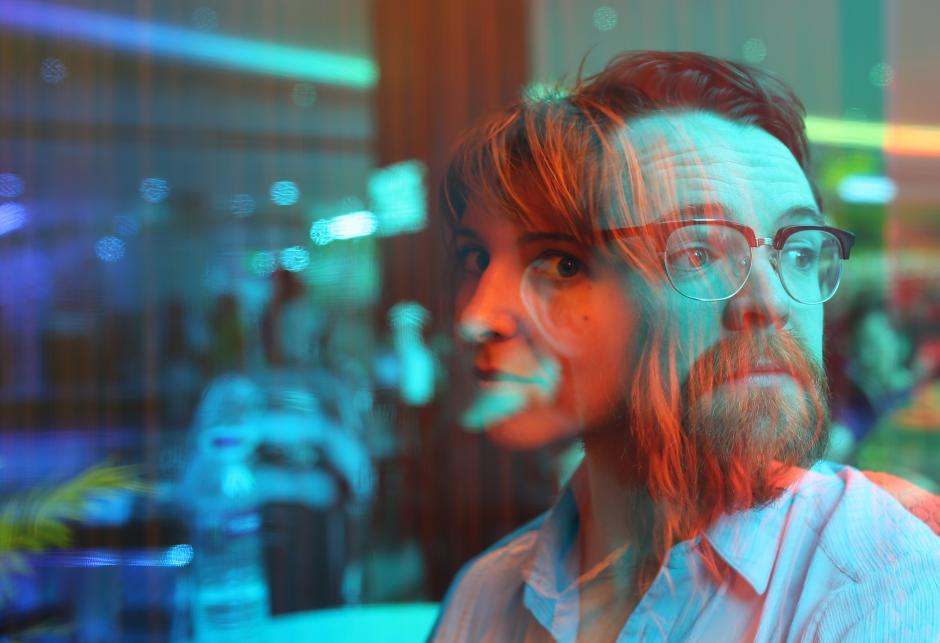 Banff Centre: Describe your personalities and how they work together as artists?

Wayne Garrett: We come at things from different backgrounds. Caitlind has more of a traditional arts background, having graduated from Alberta College of Art and Design. My arts education is a lot more informal. I lived and worked with the Arbour Lake School Collective for about four or five years. Artistically that’s where I come from, but educationally, I have a background as a machinist. So that lends me a lot of the skills required for design and fabrication.

Caitlind Brown: We like to think that we balance each other out.

BC: What are the advantages and disadvantages of working as a team?

WG: We have complementary skill sets. It’s valuable for us to have two different brains to approach problems and look for creative solutions.

CB: I also think when you work in any sort of collaborative duo, whether it’s full time or temporary, you are greater than the sum of your parts.

CB: Exactly, you can be if you are complementary. You not only have twice as much of everything but you’re entirely different organisms. So the combination of Wayne plus Caitlind is maybe completely different than either of us working just as individuals. Working together we just have so much more energy.

WG: The conceptual phase is probably the most challenging as a creative duo. Just with coming up with ideas and being able to cut each other's ideas apart. It works out well for us I think, to distill an idea down to its essence. But it can also be a bit personal and involved, which presents some challenges.

BC: There’s a lot of dichotomies going on in your work (light vs. dark, playful vs. sombre). It seems like you play a lot with opposing themes. Is that something you do on purpose or do you like to go in opposites with your work?

CB: I like those polarities to some degree because I know that they’re false. I think we both know that they are false. Any sort of dichotomy is necessarily divided. But it becomes easier to think of either through its antithesis. So in the same way that we started to really become obsessed with darkness in The Deep Dark through light, I think that’s where a lot of those oppositions come from. That’s how I think human brains work, you become obsessed with the opposite of whatever you’re interested in. Well, I don’t know, maybe that’s just me, but I think that’s often something that happens.

WG: I think that having levels of accessibility with those things are a natural progression. So having this level of play with interactive artwork just seems like very surface-based and very joyful but then the way someone interacts with it can lead to some heavier thought there.

CB: Although maybe a better way of looking at it is actually the way that microcosms and macrocosms work. Where a small version of something is actually representative of a much larger idea. I feel like that’s true certainly for the sea/see/saw piece we made in Istanbul. You take many many incremental parts —and multiples are something we are still very interested in — and when you put those parts together they become much different than their individual parts. 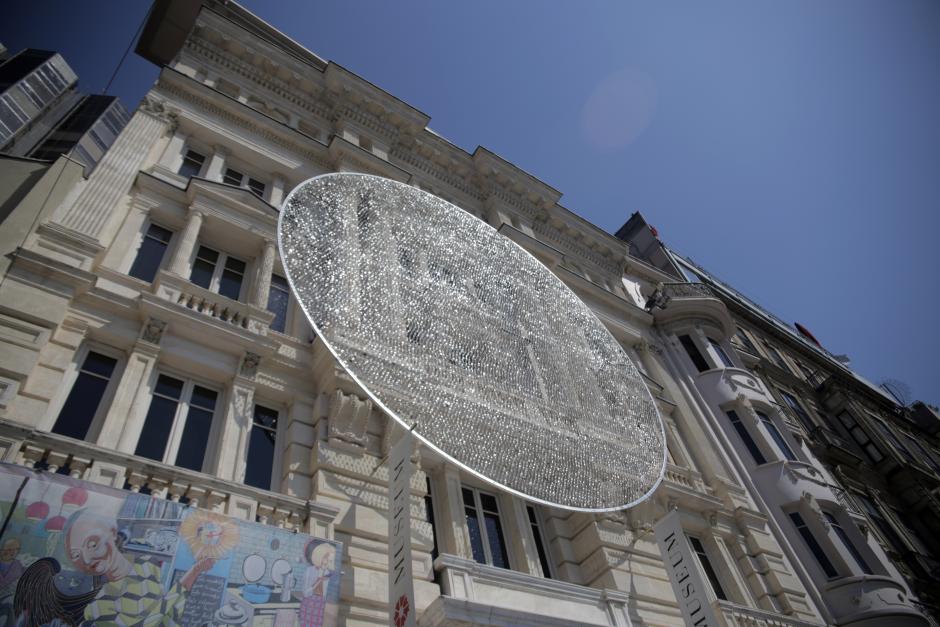 sea/see/saw; a sculpture made out of 14,000 used eyeglass lenses displayed in Istanbul

TBC: Looking at Wreck City it can be very playful and fun but it can also deal with some serious political issues depending on the level you take it to. Do you find people get it at all levels or is it OK if they just play?

CB: I feel like it’s quite important that you never tell someone how they should understand your work. Like your work should speak for itself. That being said it’s always nice when someone is able or willing to peel back the layers of something. I think Wreck City, on some level, people inherently seem to understand that there’s a conversation that needs to be had as soon as you walk into a pre-demolition building knowing that it’s going to be demolished. Conversations seem to quite intuitively or naturally occur regarding things like gentrification or civic redevelopment or like “where is this neighbourhood going?”. And many people will ask “aren’t you sad that this is going to be demolished?” or “Aren’t you sad all this work will be destroyed?”. I feel like that question has more power than any sort of permanent work.

WG: We talked about this with the other artists in our residency about points of access and accessibility through your work either through humour or interaction or motion, but something to hook you a bit. For some viewers that’s all you get, you get hooked and you’ll experience something and you won’t really think about it. In an ideal world everyone has a life-changing epiphany viewing your work. But hopefully there’s going to be some sort of balance in the middle, so some people are going to be able to dig past the first layer and look for something else and maybe have a meaningful experience.

WG: It can be kind of freeing in a lot of ways. There’s a lot more red tape and limitations when you are trying to make something permanent.

CB: If you think about it everything is impermanent. It’s pretty hubristic to think that anything is actually permanent. We fool ourselves and I feel like that’s a very human thing where you build a city and expect it to remain forever and then things happen. Detroit, for example, is a ghost of its former self. These spaces evolve too, and they’re constantly shifting organisms. Like in the same way that your cells replace each other every seven years I feel like cities do that in hyper-time, they are constantly shifting and changing. We’re definitely interested in that sort of work.

WG: Another nice thing about a temporary installation is that it does have this sort of urgency about it. Where you only have such a short window to see it so it can create this critical mass of intense energy. It’s not just a space or a sculpture or installation but it’s also an event and a movement and I think that has implicit power. 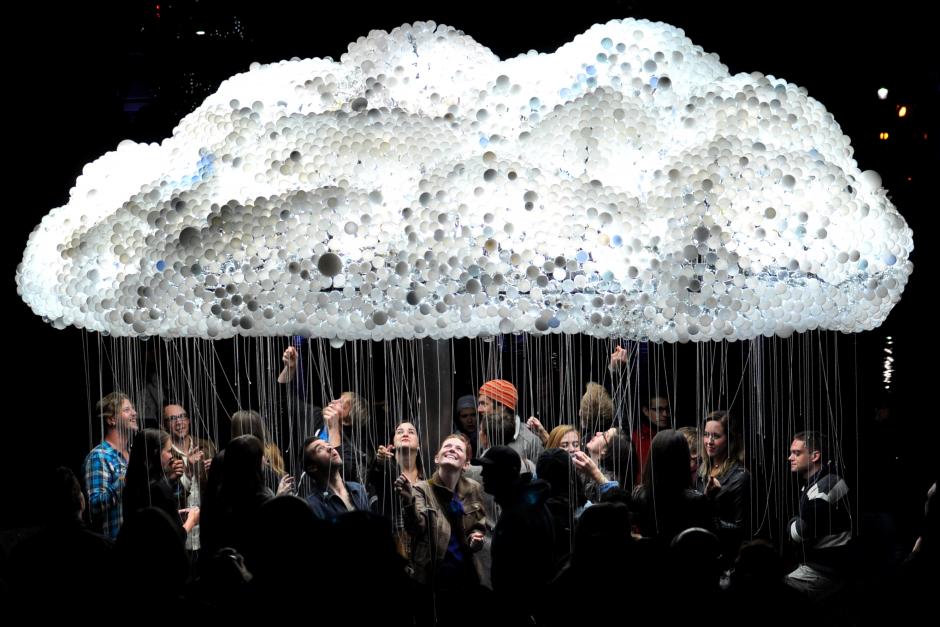 TBC: If you know something is going to be less permanent do you lose your inhibition when making it?

CB: To some degree that’s certainly true. It’s easier to experiment when you know something isn’t going to last forever and often if you’re working with very small budgets or no budget already you’re needing to experiment so much to even make anything at all.

WG: There’s a freedom to treat something as a first draft or a prototype when you’re making something temporary. Like our instillation in Banff, The Deep Dark, we’re probably going to recreate. But it serves as a really good first step to making a more refined version. It doesn’t always have to be the absolute finished project even if it is on display.

TBC: Do you have a favourite moment or funny anecdote of people reacting to your art?

CB: With Cloud in particular, because that’s the one that has been to the most countries and tourists interact with the most, we think of it as this barometer for social interaction between people and art. Often we don’t speak the local language so when we were in Poland we hung out with our sculpture and we could hear a couple words in English, so we had no idea what people were saying about it. There a great deal of inconsistencies between different cultures and how they understand the art. Like pull-string switches for example.

WG: So yeah, we had the piece in Singapore with pull-string pantry-style light switches. So a lot of people there didn’t recognize that this string is a light switch. You get people running their fingers through the strings and things like that. It was the first night after we set up and we were just keeping an eye on the piece and I watched one guy come up to the work and was just running his hand through it. He soon read the description and he was reading with his finger so I saw him stop at the word switch and starting pulling on all the strings because he just made that discovery. That was pretty entertaining.

Caitlind Brown and Wayne Garrett are a visual arts duo based out of Calgary. They recently finished their latest project, As Above, So Below, a multi-story light installation inside Calgary’s first skyscraper, which was showcased at Beakerhead, an arts, science and engineering exposition in Calgary.