MEC Takes on Diversity in the Outdoors 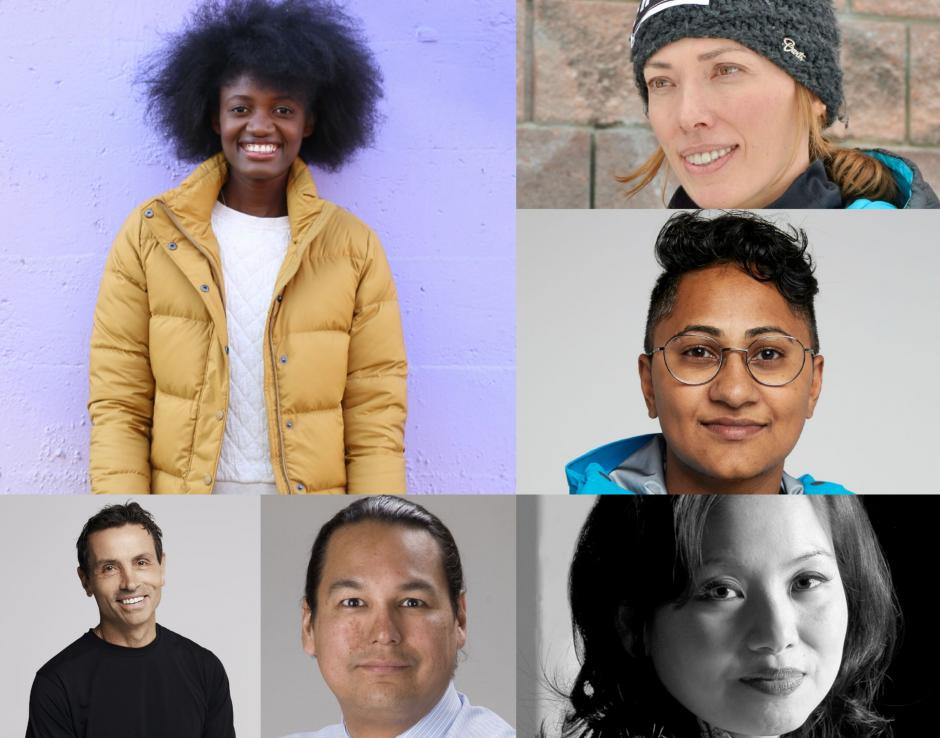 Judith Kasiama has a message for the outdoor industry: nature is for everyone. Kasiama took to her Instagram back in March to call out leading outdoor brands for perpetuating the  myth that people of colour don’t enjoy the outdoors through a lack of diversity in their advertising.
Mountain Equipment Co-op responded to the post through an open letter titled “Do white people dominate the outdoors?” and by making a commitment to be more inclusive in their ads.

The Diversity in the Outdoors panel, moderated by MEC Outdoor Nation Coordinator Amil Reddy, at this year’s Banff Centre Mountain Film and Book Festival was a chance for five panelists, including Kasiama, to unpack why representation in media is so important, and the deep healing that can come from being outside.

"There could be a perception that if industry, or we as a society start including others, that we're discluding others. The way that I've [explained] it when talking to some folks about our campaign is to think about it as a metaphor of light. The great thing about light is that it's endless. If you're a person that's not feeling included in this campaign, it's not that we've cast a shadow, all we've done is broaden the scope of light to include everyone else."

According to a U.S. national parks study, only 7 percent of black folks visit national parks. While 78 percent of all parks visitors are white. There seems to be a narrative that BIPOC don’t enjoy the outdoor compare to their white friends. This is not rooted in actual reality but a myth perpetuated by marketing that caters to predominately white audience. If you don’t believe, check out companies such as @mec, @arcteryx @arcteryxcanada @hellyhansen who fail to diversify their adds. Painting a narrative that people like me don’t enjoy the outdoors. I love nature and spending time outside! I hope these companies can diversify their adds. Sadly I couldn’t find any studies in Canada. #truthfultuesday Pc: @neverbadtimeforchanges

Here are just a few highlights from each of the panel members:

Representation matters. As a Black woman raised by a single mom who had three other children, I honestly never had access to any of the sports available out there. When I watched films I never saw anybody who is Black hiking, skiing, mountain biking. There's all these different sports that I just never felt I could take space in because there was never room at the table for me. When I made that call I was frustrated because I do go to MEC and purchase stuff.

I come from the Democratic Republic of Congo, formerly known as Zaire. After the Rwandan Genocide happened a lot of that conflict spilled into the Congo, where our 32-year dictator got overthrown and the country became sincerely unstable. From a young age I’ve known what war is like. I know what it's like to go several days without food or water because there's bombs being blown outside.

I lived with my grandmother and we worked the land and ate from the land. That's how we were. So for me coming to B.C. and then getting involved in the outdoors, there's been a lot of healing. You can never get over the trauma that you see as a child, in terms of war. Seeing people being killed, that is a very traumatic thing.

Just being in the outdoors and being in nature was the cheapest form of therapy I could afford.

During a hike I'm in my head with myself, thinking and learning to forgive myself. It's survivor's guilt that I have to deal with. It allows me to face my trauma in some ways and acknowledge that these things happened to me, but I can't allow those negative things to define who I am. I'm greater than that, and being in the mountains and being able to access these forces allow me to really reach that path of healing.

And there are a lot of people like me—a person of colour—who just don't feel safe or welcome within that space. How can we continue to have a conversation and allow them to come and feel safe in nature where all of us, enjoy it, and receive some kind of peace once we're [there]?

My mother always told me to introduce myself with my Anishinaabe name, White Wolf.

I'm an educator and dedicated my life to working with First Nations Indigenous youth.

I think we can all agree in the power of healing of land and mountains, and try to make it accessible to all Canadians.

My mother went to St. Mary's Residential School in Lake of the Woods [Ontario]. The policy was to kill the Indian in the child. What they did was kill the child in the Indian. That process has devastated First Nations people across this country.

My mother made the decision when she was a young woman to leave her community and raise myself and my brothers in Toronto. We got caught up in that cycle of violence and addiction and poverty, but we always had love. My mother always took us to our community, and we went to Lake of the Woods every summer. That was important for identity, to connect with our ancestral home in Treaty 3.

[She] began her healing journey when I was about 12. I got in that cycle of self-destructive lifestyles. How do you deal with trauma? There are positive ways and negative ways. The negative ways—addiction, substance abuse, internal violence, external violence—that was the cycle I got myself into, despite my mom healing when I was a child.

I made the decision when I was 22 to heal before I had children. In 1995 I began my healing journey, and the mountains, the land, played a significant role. My two children are right here and they're the reason that I made the decision to end that cycle.

I had to heal, and I had to find a passion, and the land and the mountains were where I found solace.

It helped me and my life since 1995 has been on a trajectory that has allowed me to be in a position where I want to share that with the students I work with.

Land-based learning is an important part of that because I believe that education is what got us into this mess and education is what's going to get us out of this mess. And the land, our language, our culture, is key to us healing and then thriving.

When I retired, I had a bit of a time finding the next journey. I realised and recognized that there was sport in another realm that could be used for making a difference.

What I found in the Indigenous communities in Canada was the disparity of opportunity that was there that shouldn't be there.

We endeavour to bring sport and activity and all the benefits and value that it has to children and youth that didn't have that opportunity.

[Spirit North] has a very strong vision and mission in terms of empowering, engaging and inspiring Indigenous youth through sport. Sport was named in the Truth and Reconciliation calls to action. It is a powerful tool that transcends barriers across the spectrum and we are committed to using that and growing it and fitting it where it is needed and using it as a tool for development.

When I was growing up we didn't have a lot of Asian representation in the media, and so we grew up watching The Brady Bunch. The boys had Kung Fu—you know, Bruce Lee and Jackie Chan to look up to—and I still remember high school when David Bowie had the song “Little China Girl” out. It took years for us to recover from that. A lot of the representation was negative, like Jerry Lewis doing a very derogatory Chinese character, and so I grew up feeling excluded in the media.

I always knew I wanted to be a writer but I hadn't really found my voice. I was reading a lot of plays by Tennessee Williams and I was really influenced by what I was reading, so I found that I was writing plays that came from the perspective of a gay young male in the south.

Then I went to Ryerson University. That was when I was able to find my own voice and to tell my own stories. The idea of Eve and the Fire Horse germinated in college and years later it was my first feature film. It went from there to the world stage. Since then I've attended so many festivals—and a lot of Asian film festivals—and there is a lot of talent out there. Now Asian films are trending because of [the movie] Crazy Rich Asians, and [there’s more] pressure on Asian filmmakers, because their success is our success. It's been what, 20 years since the [movie] The Joy Luck Club, and this is the next big thing, right? I noticed in the last month my agent is contacting me more, and I got my first interview to direct a Disney TV series.

It's great that there's an opportunity there but we don't want to be a trend, this should be a long term commitment to diversity in the media.

We are in the position to be emblematic of an entire culture and that's not fair. What needs to happen is that more voices should join our voices, so at the end it becomes a non-issue. I love that everybody's here but it makes me sad that we have to have a panel like this in 2018. I wanna be here, I want to be talking about my work, my films, my friend’s work, other people's work—the passion of films.

I've been fortunate to live a life that has put me in the crosshairs of historical change numerous times. I grew up in Apartheid South Africa. I was part of the change that happened in that country, and what was interesting is that when many countries and organisations were pulling out of South Africa I was hired by an organisation who got involved. It was ADIDAS, and our mandate was to use sport or bring sport to the previously disadvantaged people to create a more positive environment [to] uplift their lives and bring them into the mainstream.

I've always been a student of systems thinking and demographics and the reality is, if you look at how society is changing and how the culture and makeup of Canadian society is shifting, if we don't do things now we're going to be irrelevant in the future.