Oliver Stone on Vietnam and the Joy of Directing

It’s remarkable how quiet 950 people can be. Ian Brown’s introduction of Oliver Stone on Saturday night —“easily the most controversial filmmaker of our time,” “a recklessly outspoken left-wing provocateur” — was greeted with loud applause and wolf-whistles; but once his interview with Stone began, the sold-out Eric Harvie Theatre hushed.

It was so quiet, I found myself worrying that the scratching of my pen, as I took notes in the dark, was disturbing my seat mates. Here are my favourite Oliver Stone moments:

On his early life:

“I was born Republican, raised conservatively in New York City. My father was an Eisenhower Republican. He was a soldier in World War Two. He despised Franklin Roosevelt, despised labour unions. That was the orthodoxy of my time.”

“I ended up in Vietnam, among other reasons, for patriotic reasons because I wanted to fight, like Tom Cruise said [in Born of the Fourth of July]‘I want to do the right thing. I want to fight for my county.’”

On how Vietnam changed him:

“I went through the looking glass, so to speak, in Vietnam. And I think, ‘black is white and white is black.’ I was in shock. I was trashed out, burned. I’d seen so much — disgusting things. And beautiful things, by the way. However, the break point … [came in 1985]. We were in Nicaragua, Guatemala, and Salvador and those places woke me up, because all of a sudden I said ‘come on’, you’re almost 40 years old and you are seeing the same thing you saw in Vietnam. You are seeing the same soldiers walking around. These pink baby faces in tropical countries … and I said ‘you know, this is a repeat of Vietnam.’”

On choosing film over writing:

“I couldn’t write in Vietnam. The rain was too thick. There was no paper. Everything got wet. I bought a little Pentax 35, and I started taking amazing pictures, and I really loved the visceral aspect of the thing. You cannot be cerebral in the infantry, you’ve got to pay attention to everything, you have to be in the moment. Which is very much like a film — it has to become visceral. And I think that combination of visceral and still cerebral was a beautiful marriage for me personally, after the war, to go to film school.”

On being in the same class as George W. Bush at Yale University:

“I did not know Bush at Yale, I met him when he was a candidate and he had told me that he was in my class.”

“He was the kind of boy that made me flee from Yale. I say that not lightly, because it is easy to make fun of Bush, but I say it also about myself. Because I was one of those boys, you see. I went to a boarding school like he did, and I earned high grades, unlike him. I did get into Yale, mostly on merit. But when I saw my class — this privilege, this sense of entitlement which you still see in the United States, in the Washington circles, in the media circles, in Hollywood circles, and certainly you see it in New York business circles. That sense of entitlement scares me, and terrifies me, because there is a fundamental corruptness about it.”

On the joy of directing:

“What I love about directing is this mélange of writing —which is very alone, very interior — and then you take it to this exterior place where you are working with actors in a completely different world. … And there is another side to directing, which is working with a crew — the technicians. They call it the crew, like a pirate crew. The technicians are very sensitive people, and they’re all different. There are 15 to 20 keys who do work in costuming, in production design, in camera, in sound, in mixing, in post, in pre, in locations. All of these things require their own touch, so it really is a challenge. And I suppose I like the solitariness of being a writer, and I like the mix of coming out in public and trying to get it across to so many people.”

Rather than relying on my in-the-dark transcription skills, watch the above clip of Stone himself describing how he made his first two major films —Salvador and Platoon— in the course of a single year.

“Satire and Controversy —An Evening with Oliver Stone” was a Heather and N. Murray Edwards Legendary Leaders Event. 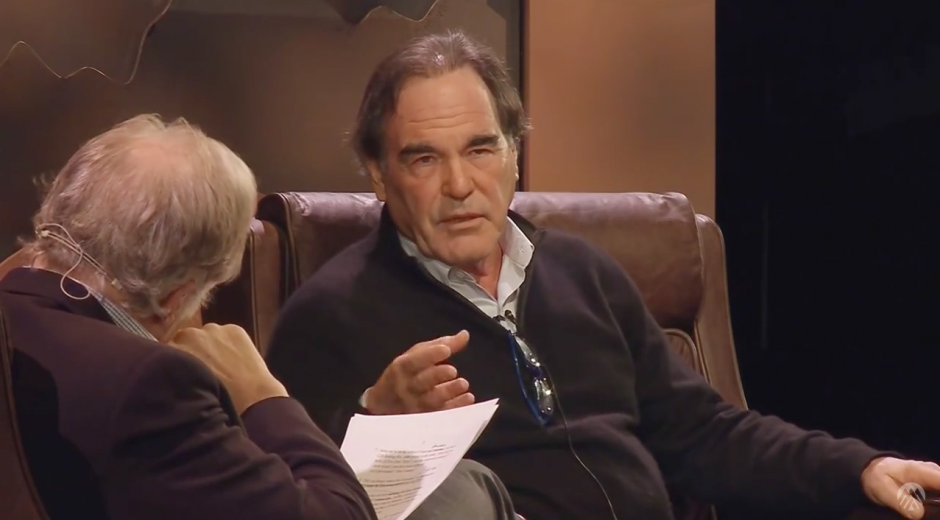