From Page to Stage: Costume Design for 'The Rape of Lucretia' 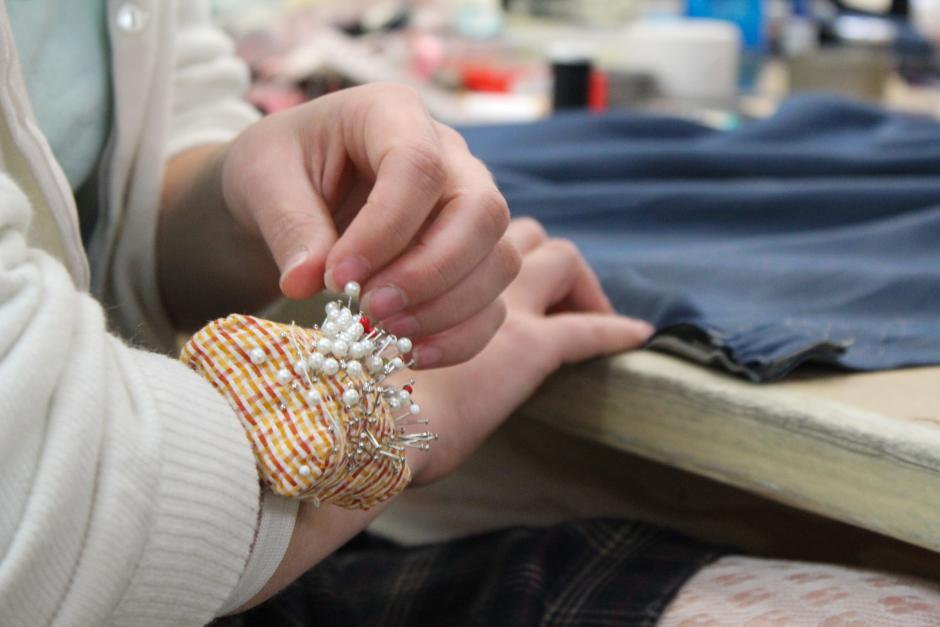 We spoke with Camellia Koo, the set and costume designer for the Banff Centre production of Benjamin Britten's The Rape of Lucretia, part of the Opera in the 21st Century residency. Learn more about the program here.

Actors playing soldiers on stage look terrible if you get the details of their costumes wrong—they look, well, costumed instead of authentic.

So while it’s easier than ever to work as a designer remotely, using apps like Pinterest as shared idea boards, Camellia Koo flew from Toronto to work with Banff Centre’s wardrobe team. She wanted to get the details right for Benjamin Britten's The Rape of Lucretia.

She skipped design sketches because she could more accurately represent details with reference images pinched from Google. Director Paul Curran set the opera, originally set ancient Rome, in the 1940s, so there were plenty available online.

The men’s uniforms were even ordered online, with additional pieces borrowed from Edmonton Opera, found at surplus stores, or pulled from Banff Centre stock.

Though once the costumes arrived, the sewers quickly got to work taking them apart. In order to make it look like the uniform was intended for the particular singer, they treated the costumes as pattern pieces that needed to be pulled apart and put back together.

The three ladies in the show are considered “full builds,” with Lucretia’s dress made in three iterations: a mock-up, a clean version with a tear-away sleeve, and a dirty, bloody, ripped version—worn after the rape. 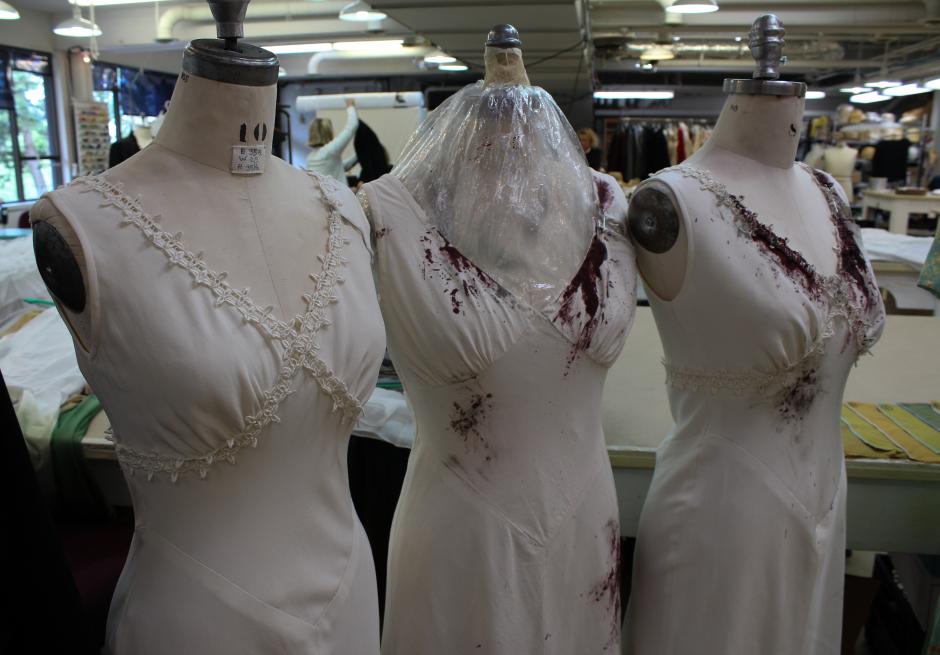 The ladieswear was conceived by looking at reference images and collaging details from different dresses into a mock up. A luxury not all productions get, the mock-up is often made using cheaper material to be used in rehearsal. It’s a good way to get the actor’s silhouette right and to test that the design drapes properly.

At this stage the actors are brought in for a fitting and for questioning.

“They know their character way better than I ever would because they live it every day,” Koo says. So she asks them how they will move on stage and reads them for their level of comfort in the outfit.

This helps prevent the dreaded wardrobe malfunction. If she knows the character is going to do the splits on stage, she’ll have chosen a fabric and fit that will allow for that. She wants the costume to make them feel good, if they think of it at all.

Sitting with the director and head of wardrobe, Koo watches rehearsals to see how the mock-ups are faring. Maybe a hem needs taken down a few inches, or a jacket needs let out. If changes need to be made she reports back to the lead cutter, Judy Darough, who will plan the alterations.

The deadline for final tweaks is opening day, but major changes should happen before the final dress rehearsal so there are no surprises for the performer. Surprises are generally avoided by having a constant dialogue between the costume designer, director, and actor from day one to show close.

“It's just being open and receptive to what the character is supposed to be and who the performer is. I can't impart too much of my own ego in that because then it doesn't leave room for their personalities,” Koo says.

However, The Rape of Lucretia allowed lots of room for her own taste to shine.

There are very few opportunities for brand new productions of opera in North America. Often companies rent older sets and recycle costumes, so Koo jumped on the opportunity to build a show from scratch.

Already there’s buzz about her designs being recycled in remounted productions of this opera. Some interested theatre companies will be attending the opening with the idea of renting components of the show.

The Rape of Lucretia Wardrobe 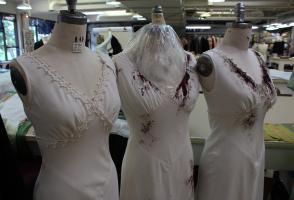 Lucretia's dress was made in triplicate: a mock-up (centre), a clean version, and a bloody version--worn after the rape. The blood is painted on. 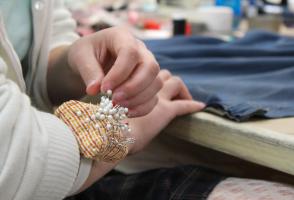 Often cutters, who make patterns and cut the cloth for their team of stitchers, specialize in making women's fancy dress costumes. People who dress men are called tailors. 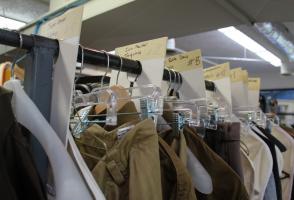 When shopping for this production, set and costume designer Camellia Koo found a Jeep military jacket in a memorabilia store in Calgary. A rare find in good condition, it is one of her favourite costume pieces of all time. It also came to play a key role in character development in the show. 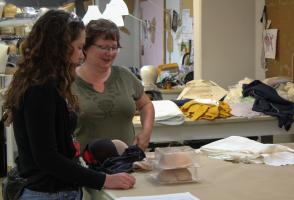 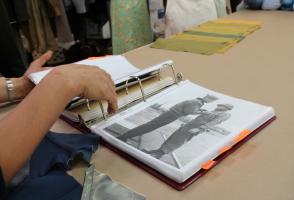 Reference images which inspired the costumes are kept together in a book for easy consultation. This book, with a list of where all the props and costumes are sourced from, will travel with the show if it is rented out. 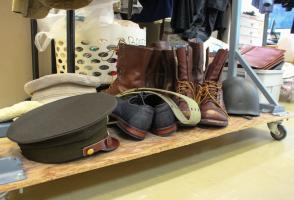 The Rape of Lucretia production relied on Banff Centre's stock collection for some of the shoes, socks, underwear, and belts used in the show. 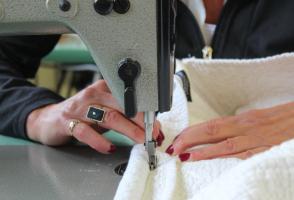 After their measurements are taken, actors will visit the costume shop for as many as three fittings during the course of rehearsals to alter the fit of the garment or to weigh in on elabourate details like collars or petticoats. 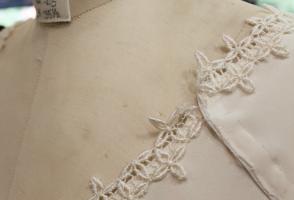 Designed for effect when Lucretia is attacked, the dress 'rips' and clips back together for the next performance. 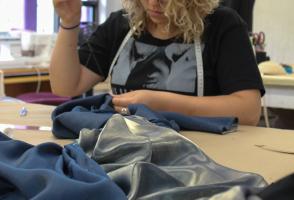 Not all ideas pan out

This dress was originally designed to be reversible--both a day dress and a peignoir for the character of Lucretia, but in the final production only one side will appear. 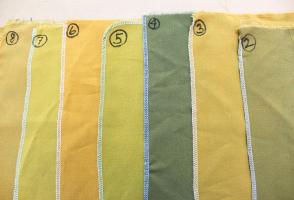 The older confidante character of Bianca wears a dress made with fabric dyed at Banff Centre. Koo and Thomas liked the weight of the fabric, but they
were worried that the colour might be too close the uniforms so they made sure
it was dye-able. These are some of the dye samples. 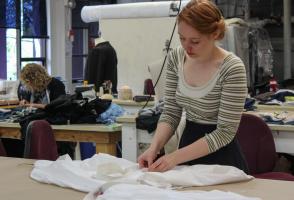 The theatre department takes on more than 30 practicums over the summer months in specializations ranging from stage carpentry and lighting to props and makeup. 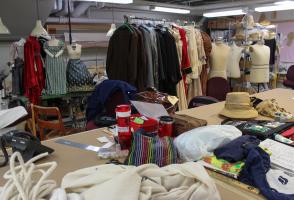 While the Banff Centre has an eclectic collection of costumes made in every decade since the 1940s, these costumes only come in the size of the actor who wore them, so by no means is the storage one-stop shopping.