We Have VR — Now How Do We Use it to Tell Stories? 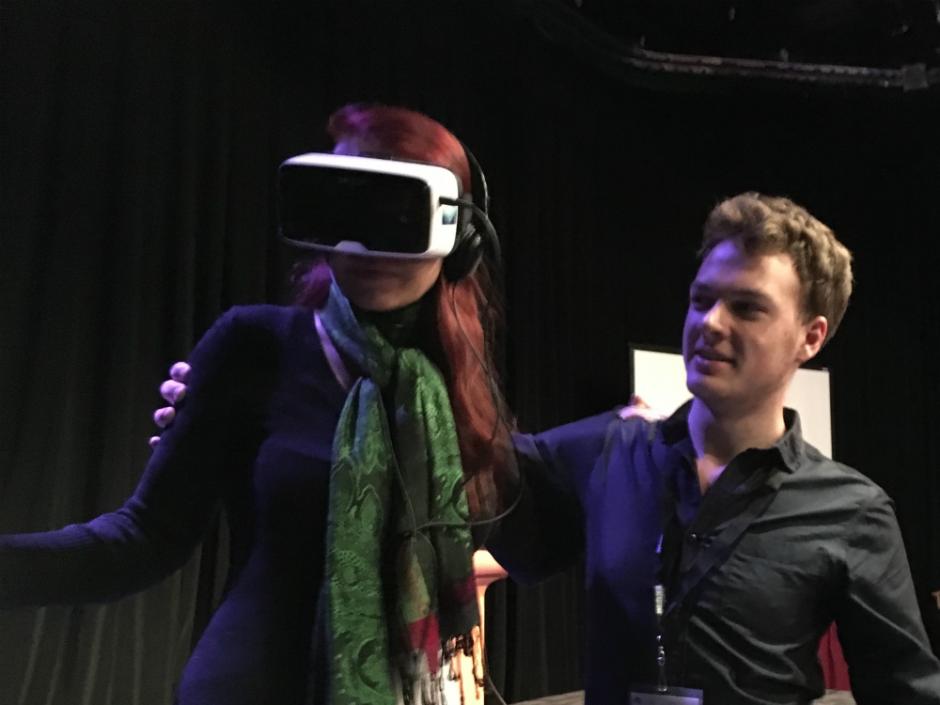 Celine Tricat tried out a VR experience based on The Walk, a documentary about tightrope walking.

“Stop saying VR is the future of cinema. VR is not the future of anything,” Celine Tricart said, chopping the flat of her hand against the table to punctuate her words.

At first, it seemed like an odd thing for someone like her to say. Tricart’s a filmmaker who is passionate about virtual reality — someone who has already made a handful of short films with the technology. When she talks about its potential for storytelling, she does so with an excited smile and distinct glee in her voice.

I had just pulled Tricart away from a quick lunch, snuck in between Saturday sessions at Story Summit at The Banff Centre last week. She and more than a dozen other speakers from across North America spent the weekend hashing new ways to tell stories (and, hopefully, get them in front of people.) That includes virtual reality.

While we sat in a quiet corner in the dining room, Tricart relayed that quote, which came when another member of the summit argued that filmmakers can’t think of VR as a descendant of cinema. The two mediums are too different, and none of the rules can translate from one to the other.

Tricart likened it to saying photography is the future of painting — the comparison does a disservice to both mediums, and prevents people from fully exploring what kinds of stories they can tell with the new approach.

“We have to erase everything and start from scratch,” she added.

Of course, it’s one thing to say that VR stories need to have a different approach to narrative. It’s entirely another to say what that approach is.

Tricart herself is not even really sure. She’s an advocate for the medium, but doesn’t pretend she has a real handle on it. At this point in its history, it is doubtful anyone does.

But she does know it’s the emotional connection that VR offers that strikes her the most. What she describes is something entirely different from the way a person connects with cinema.

A viewer can become engrossed in a film, but there is always a distance between them and the screen. They are always a passive viewer, watching a curated experience.

Virtual reality, however, doesn’t have distance. The mind is tricked, surprisingly easily, into thinking that it is seeing the real thing.

"Your brain, on a subconscious level, doesn't see a difference between the VR and reality," she said.

"We have to erase everything and start from scratch."

That connection sometimes comes as a surprise to even the people telling those stories, according to fellow presenter Dylan Pearce. The Alberta filmmaker has worked with VR in various ways, and is now in the process of shooting a film using the technology.

He points to the example of Henry the hedgehog as a sign of just how differently audiences react to VR. Henry is the star of a computer-animated VR film being produced by Oculus Rift, the hardware company whose headset kicked off the latest round of virtual reality fever.

Henry is a little hedgehog who desperately wants to hug others, but is unable to on account of him basically being a small ball of spines — pretty standard kid’s film stuff. But when the filmmakers showed it to test audiences, their reaction was surprising. Things that happened to Henry that would seem funny or silly on a movie screen became heartbreaking when it happened to a cartoon hedgehog that they (or at least, their subconscious) thought was real.

"People felt bad and empathy for the character, rather than laughing along with it," he said.

Both Pearce and Tricart say it’s that connection that makes VR such a potentially-powerful tool for storytelling. Documentary storytelling, especially.

Already, filmmakers have experimented with VR to tell the stories of people living in Syrian refugee camps, or showing the viewer the perspective of a child dealing with domestic violence at home. Not just seeing it, but living it.

But that potential is not without a lot of responsibility. Denise Quesnel has been interested in VR for decades. Now, as a research associate with Vancouver’s Emily Carr University of Art + Design, she studies the way that virtual reality is changing. And how it is changing us.

Storytellers have a responsibility, she said, to their audiences to understand that many of the topics that filmmakers tackle — things like violence and fear — can have lasting, even traumatic effects on the people watching.

It’s not just a philosophical question — Joseph Delgado, a gamer who modded Grand Theft Auto to use a VR headset and motion controls, said he felt “guilty” and “horrible” about doing so. It was the same game, but the different mediums created a completely different experience.

"The impact of VR is quite serious, it can give you emotionally or socially critical experiences,” she said.

“You can't really delete a VR experience if it was something that resonated on any level."

They also have to be mindful of the time it takes for the brain to slip out of “virtual reality mode.” Tricart talks about a demonstration with a demo that allowed her to walk through walls — after taking off the headset, she immediately tried to do the same thing in reality.

Quesnel admits to trying to sit on VR chairs and couches that she intellectually knew were not there, but nonetheless was convinced that they could support her.

"Everyone [who uses VR] has got stories about these things that happen to them. And it doesn't take long, sometimes minutes, before your brain thinks it is real," she said.

The impact of VR is just one of the many questions facing those involved in the fledgling industry. Tricart, Quesnel and Pearce all readily admit to not having the answers — or even knowing whether the questions can be answered.

That can cause a bit of anxiety. But it’s also one of the things that explains their passion for VR — a new medium, fundamentally different from the ones that came before it. And the freedom it provides to find brand new ways to tell stories.

"I think we have so many amazing things to do with VR to make this world a better place .. we can show different perspectives on things," Tricart said near the end of our chat.

"It's a powerful tool to make humanity better, if we use it well. That's the optimistic side of me."