Lori Waxmann via Skype at the "Are Curators Unprofessional?" symposium, 2010.

These programs offer ongoing professional development and complement degree granting curatorial programs by providing a venue to meet, explore, and engage in research.

The Banff International Curatorial Institute Fellowship program supports experienced curators, arts writers, researchers, and artists in focusing deeply on the continued development of their practice over an extended period of time. In addition to having the time to work on longer term projects, participants are invited to engage with the creative community in Visual Arts, meet with artists-in-residence and each other, and share their work. A rotating international jury selects applications for this fully funded program.

Participants develop their work within a supportive and stimulating creative environment and foster collaborations resulting from direct interaction with faculty, peers, professional artists, and other disciplines.

The program aimed to explore alternative realities for curatorial practice in a transformational world, unconventional and innovative artistic/curatorial platforms and structures; how we engage with technology; the shift toward local from global; and the systemic changes that need happen in the field to create more equitable ways of working for communities, artists, and curators.

The third Banff International Curatorial Institute (BICI) Critical Art Writing Ensemble residency welcomed writers looking at art and artists with a writing practice to explore writing as both a literary reflection on visual art and as an integral aspect of artistic practices.

This residency provided time and space for mid-career arts writers and curators to develop a critical external project and conduct research while engaging with artists-in-residence and programs in Visual Arts.

How might a geologic lens affect artistic and curatorial practice? This program of fieldwork, seminars and independent study considered geological formations and stratigraphy, minerals and resource extraction to speculate about a more expansive, slower and longer-term view of art, exhibitions and their institutions.

The first Banff International Curatorial Institute Critical Art Writing Ensemble explored art writing as an aspect of literature. Within this context, exhibition catalogues can expand into short novels and stories; and reviews into haikus and soliloquies that can transcend the ephemerality of quotidian journalism. Together, participants considered and composed art writing with creative approaches to form and highly distinctive points of view backboned by rigorous analysis.

This symposium discussed sustainability and remoteness, what it means to invite artists to undertake residencies in remote places and how such residencies are expected to contribute to the economy of such places – both financial and cultural.  Speakers and participants include Silke Otto-Knapp, Zita Cobb, Jeff Bell, and Kitty Scott, among others.

The three day symposium brought together leading international curators, critics and artists to address the following questions: Is curating a profession? Does curating have a code of conduct? What does it mean to be a professional and when is it necessary to become unprofessional? Speakers included Geoffrey Farmer, Matthew Higgs, Jennifer Fisher, Philip Monk, Cuauhtemoc Medina, and Ute Meta Bauer, among others.

Collaboratively organized between The Banff Centre and the department of Curating Contemporary Art at the Royal College of Art in London, this summit explored perspectives and issues that might connect Indigenous curating with similar practices in the UK. Participants and presenters included Jolene Rickard, Adrian Stimson, Gerald McMaster, Candice Hopkins, Paul Chaat Smith, Ryan Rice, Jean Fisher, and Mark Nash, among others.

Trade Secrets explored specific issues affecting the curatorial profession including: the education of curators, the challenges facing collection-based curators, trends in curatorial research, and the writing of curatorial histories. Speakers include AA Bronson, Heather Diack, Candice Hopkins, and Ken Lum, among others.

In this symposium, acclaimed artists, curators and writers from Canada, the US and Europe explored relationships between architecture, public space and time. Through cultural theory and artists’ interpretations of space, Informal Architectures addressed issues relating to monumentality, ruin, nomadic culture, and environment in a post-9/11 climate. This event was co-presented by Middlesex University School of Arts, London; Plug In ICA,Winnipeg; and the Banff International Curatorial Institute.

The Comic Craze Symposium was a public forum to exchange recent artistic, scholarly and curatorial research associated with comic cultures. The event was co-organised by the Banff International Curatorial Institute in collaboration with the Vancouver Art Gallery.

Informal Architectures is an international, inter-disciplinary symposium that examined issues around the representation of space in contemporary art, visual culture and architecture. The meeting explored the study of spatial culture and the built environment; the interplay between human imagination and the spaces we have made for ourselves to live in, including buildings, landscapes, gardens, museums, libraries, galleries, monuments, maps, cyberspace; and artworks and writings constructed around such environments. Speakers included Raqs Media Collective, Marjetici Potrec-Kagiso, Mel Chin, and Lida Abdullah, among others.

During the past decade, contemporary philosophical and theoretical thought has had a major impact on spatial culture. Artists and curators have explored alternative strategies and criteria for the creation, representation and interpretation of space, and over time considered the dramatic transformation in contemporary culture, popular imagination and everyday life. This meeting investigated society’s relationship to the built environment and looked at how it has been continually re-imagined. Invited speakers included Gianni Vattimo, Rita McKeough, Adrian Rifkin, Eyal Weizmann, David Medella, Brian Jungen, and Andrew King.

Walter Phillips Gallery in partnership with the Aboriginal Arts Program at The Banff Centre hosted this symposium to provide a forum for Indigenous curators to discuss and debate issues related to their curatorial practices and professional development among a wider audience of artists, cultural workers, museum and gallery directors, scholars and students, and the public.

Obsession, Compulsion, Collection: A Symposium on Objects, Display Culture, and Interpretation
May 6 – 10, 2003

What is the social function of the collection in terms of performing a kind of ideological statement? What position does the curator occupy when negotiating between public and private interest? How do these positions or responsibilities differ depending on affiliation with public or private institutions? Has the pressure for blockbuster exhibitions and need to generate revenue placed museums and cultural works in a tenuous position between caretaker and breadwinner? Have the paradigms for ethics in museums changed and if so what are the new standards? These questions served as the point of departure for conversations within Obsession, Compulsion, Collection.

Curators and educators from across Canada were invited to this think tank aimed at bringing cultural workers together to network with their colleagues from other parts of the country and for discussions related to contemporary curatorial and museological practice.

The three-day Think Tank brought together twenty international curators to discuss the use and role of collections issues in contemporary curatorial practice. Curatorial work in the field of historical art was undergoing notable shifts at this time, making it one of the most dynamic areas of curatorial activity as curators opened up new paradigms for exhibitions and pushed the boundaries of the interpretation of fine art in museums and public art galleries.

This Think Tank focused around conversations of publics: rather than furthering conversations on how to bring audiences inside, this gathering discussed bringing art objects to audiences outside of museum models. This gathering aspired to engage in all meanings of site and to discuss contemporary curatorial practice focused on presenting works outside the institution of art.

Great Expectations: Prospects for the Future of Curatorial Education

Raising Frankenstein: Curatorial Education and Its Discontents presents compelling new writing that explores the education and formation of curators. Edited by Kitty Scott and including essays by Barbara Fischer, Teresa Gleadowe, Francesco Manacorda, Cuauhtémoc Medina, and Lourdes Morales, this book offers an overview of recent thinking on curatorial pedagogy, designed to elucidate, define and build on current debates surrounding this subject.

The questions posed here are timely and provocative. The five essays, complemented by a collective discussion, provide a set of cogent inquiries and analyses for all those from students to practitioners who concern themselves today with the presentation and theorization of contemporary art. At its heart lies the single question, “Where does the curatorial profession reside?”

Raising Frankenstein was developed from the symposium Trade Secrets: Education/Collection/History, organized by the Banff International Curatorial Institute in collaboration with Teresa Gleadowe and held at Banff Centre, November 12 – 14, 2008. 2010; ISBN: 978-1-894773-32-4

Making A Noise! Aboriginal Perspectives on Art, Art History, Critical Writing and Community is a collection of essays by leading Canadian and international curators and artists. This impressive selection of writings rethinks the role of Indigenous art and curatorial practice in contemporary culture, bringing into question the conventions in which Indigenous art is framed. The book puts forth ideas on the exhibition and display of Indigenous art, its discourse and audience while also addressing issues of repatriation, the role of the curator, the institution, and the community. Artists and contributors: Kathleen Ash-Milby, Marie Bouchard, Joane Cardinal-Schubert, Nika Collison, Vincent Collison, Brenda L. Croft, Guy Sioui Durand, Richard Hill, Candice Hopkins, Jim Logan, Lee-Ann Martin, Catherine Mattes, Megan Tamati-Quennell, and Jim Vivieaere. 2005; ISBN 1-894773-13-6

Art museums and public galleries amass collections in order to preserve, document, research, and exhibit collective histories as a culture. Obsession, Compulsion, Collection is a compilation of essays by leading Canadian and international curators and artists who explore collecting as a cultural act. Examining the meaning of art objects in a broader context, the book seeks to uncover the human impulse to collect and the social context, rhetoric, politics, and science associated with cultural collections. 2004; ISBN 0-920159-99-0

The Edge of Everything: Reflections on Curatorial Practice

Few public venues exist for the contemplation of curatorial research and development in Canada and there are even fewer forums for reflection by Canadian curators within an international context. The Edge of Everything is the result of a book project designed by Catherine Thomas to provide such a space for curators. It is a surprising collection of political, personal, quirky, and humorous commentary by Canadian and international curators on their individual practices. 2003; ISBN 0-920159-92-3

Beyond the Box: Diverging Curatorial Practices

Beyond the Box: Diverging Curatorial Practices is a collection of essays by leading Canadian and international curators and artists that explores regions of art outside the gallery or museum. Delving into four main topics – Publications, Biennials, Art Museums Today, and New Media – the book documents contemporary curatorial work beyond the boundaries of traditional curatorial practice. 2003; ISBN 1-894773-05-5

Naming a Practice: Curatorial Strategies for the Future

This publication features the proceedings of the 1994 seminar Naming a Practice: Curatorial Strategies for the Future that originated as an independent project within the Canadian curatorial community. This publication documents the seminar, following the format of the event itself and features transcripts of the formal presentations, portions of the general discussion, as well as brief commentaries by each of the seminar organizers. 1996; ISBN 0-920159-84-2

To the General Museumgoer Who We Assume Is Part of Our Colorless Mass
by N.E. Wyatt-Pearson

Self-Destruct Mode Initiated: Retro-fitting the museum to save it from itself
by Christiana Myers 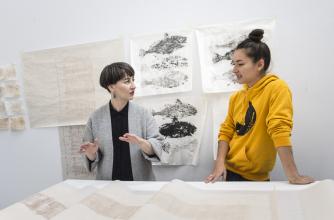 In this self-directed research fellowship for established curators and arts writers, focus deeply on the continued development of your work while engaging with other participants and programs in...