A Brief History of Dance 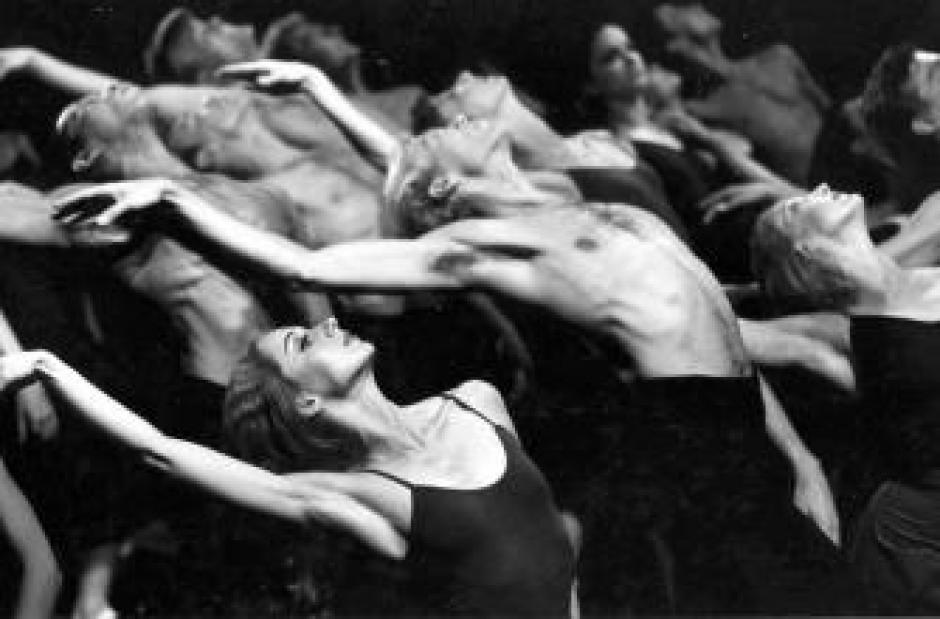 Banff Centre has been training artists since 1933 in the Canadian Rockies. Dance programs started here in the late 1940s when Gweneth Lloyd and Betty Farrally, co-founders of the Royal Winnipeg Ballet, initiated a six-week summer program with a focus on ballet training. In those formative years, Dance programs expanded to include public presentations as part of the Banff Summer Arts Festival as well as touring to cities across western Canada.

In 1972, under Arnold Spohr’s direction, the program evolved through cross-county auditions and scholarships. A decade later, in 1982, Brian Macdonald was appointed head of dance and ballet, and served in this role until 2002. Dance programs flourished at Banff Centre over the following decades, featuring performances every season and innovative residencies to train choreographers, dancers, and dance companies.

Since 2014, internationally respected choreographer and dance artist Emily Molnar has been Artistic Director of Dance, guiding Banff Centre’s dance initiatives in collaboration with the dance community, and including programs, partnerships, commissions, residencies, workshops and other forms of professional development related to dance.

To view the most current dance programs at Banff Centre please click here.

1947: Initiated by discussions between Gweneth Lloyd and Donald Cameron, dance programs at Banff Centre begin with a six-week summer program focused on ballet training, as part of the theatre department.

1958: Dance becomes an independent program, after previously being under the theatre division. Lloyd initiates annual invitations to guest dancers from London’s Royal Academy of Dance.

1959: British dancer Sonia Chamberlain, from the Royal Academy of Dance, serves as a dance instructor and would continue as faculty for 13 summers, until 1972.

1961: Emerging dancers Richard Cragun and Jennifer Penny appear in Banff Centre’s production of Arabesque. Cragun went on to be a dancer with the Stuttgart Ballet in Germany and Penny became a prima ballerina with The Royal Ballet in Britain.

1961: Brian Macdonald joins the faculty and initiates a jazz dance program. Macdonald later founded Banff Centre’s musical theatre program in 1964, and became one of the most formidable dance educators in Canadian history. He passed away in 2014.

1962: Reid Anderson, who would become a professional dancer and Artistic Director of the Stuttgart Ballet, attends dance programs at Banff Centre at the age of 13.

1964: Eva von Gencsy instructs jazz dancing at Banff Centre. Earlier in her life she had fled her native Hungary, and worked in Winnipeg as a servant/housekeeper while dancing with the Royal Winnipeg Ballet. Von Gencsy went on to found Montreal’s Les Ballets Jazz.

1967: Gweneth Lloyd retires from co-directing Banff Centre’s dance programs after 20 years. At this time, there were over 200 students in the annual dance programs. With the construction of a theatre complex complete with facilities for costume, wig and set construction, a more formal production-focused training program was added, allowing for fully designed and realized dance productions to be presented, complete with a full orchestra.

1972: Under Arnold Spohr’s direction, the program was re-named Dance/Ballet and a higher level of excellence was achieved through a more rigorous selection process, limited enrollment, cross-county auditions and access to scholarships.

1977: Evelyn Hart stars in the Summer Dance Festival; she went on to become lead dancer at Royal Winnipeg Ballet and won Gold at the Varna International Ballet Competition.

1986: Christopher House is awarded the Clifford E. Lee Award for Choreography. Since 1994, House has been the Artistic Director of the Toronto Dance Theatre and has since served as faculty in multiple Banff Centre programs. He is the recipient of three Dora Mavor Moore Awards.

1987: David Earle, co-founder of the Toronto School of Dance, is awarded the Clifford E. Lee Award for Choreography.

2014: Critically acclaimed choreographer and dance artist Emily Molnar is appointed Artistic Director of Dance. Molnar would receive an Order of Canada in 2016, and was artistic director of Ballet BC since 2009.

2015: Aszure Barton, the Edmonton-raised and internationally acclaimed choreographer, takes part in a residency with her company Aszure Barton & Artists, to create the performance, Awáa, which premiered at the Canada Dance Festival in Ottawa then performed at Banff Centre.

" Those precious weeks at Banff provided me with a basis from which I’ve built my professional career…Banff was the time that I studied ballet every day over an extended period of time. This was first exposure as to what life as a ballet dancer might one day be like and I thrived on it. The Banff experience fed my hunger for ballet like no other."

Reid Anderson discusses his first year as a dance student at Banff Centre, from Artists, Builders, and Dreamers: 50 Years at the Banff School by David and Peggy Leighton