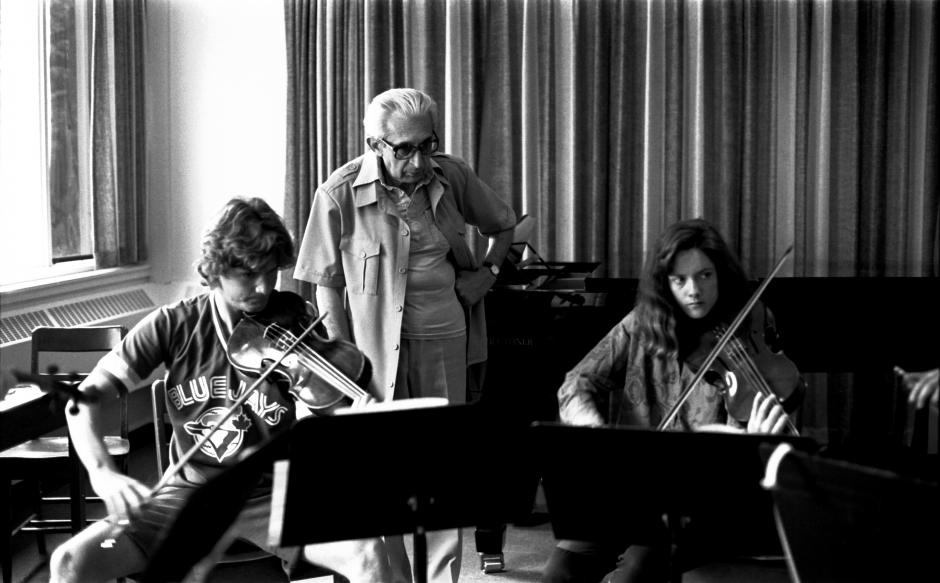 Banff Centre for Arts and Creativity has been training artists since 1933 in the Canadian Rockies. Music has been offered since 1936, when courses in musical composition, interpretation, and performance were added to the community theatre training programs.
Banff Centre’s music training evolved in the 1960s when Thomas Rolston began teaching the Suzuki method to students. Within five years Rolston was appointed head of music at Banff Centre; he introduced brass and woodwind classes to the summer programs. Together, Thomas Rolston and pianist and music educator Isobel Moore Rolston had a massive influence on music programming and performances at Banff Centre.
Over the decades Banff Centre became a leading force in the education of musicians from across Canada and around the world through its innovative and intensive programs.
To view highlights from Banff Centre’s history of music please scroll down to the dateline.
To learn more about our Summer Music Programs click here.
To view the history of the Banff International Workshop in Jazz and Creative Music click here.

1936: A two-week course in musical composition, interpretation, and performance for piano is introduced as part of the community theatre training program at Banff Centre.

1937: Financing to develop a fine arts program is made possible by a grant from the Carnegie Foundation of New York to the Department of Extension of the University of Alberta, then under the direction of Donald Cameron, Banff Centre’s director. A course in choral music is added to the piano and voice courses.

1951: Strings and operatic singing are introduced to the music program.

1960s: Thomas Rolston, a music teacher at the University of Alberta, introduces children’s classes in the Suzuki method at Banff Centre.

1965: Thomas Rolston is appointed head of the strings program; brass and woodwind classes are added shortly after.

1971: Thomas Rolston and Banff Centre President David Leighton begin to specialize the music programs with a focus on faculty who were practicing artists with a strong commitment to teaching. The Banff Summer Arts Festival is established.

1974: The jazz program commences under the direction of Oscar Peterson and Phil Nimmons. Master classes are also added in percussion led by George Gaber, and in guitar with Alirio Diaz, Oscar Ghiglia, and Michael Lorimer. Neil Armstrong, Banff Centre’s Vice President, establishes an annual Festival of Youth Orchestras bringing in many young artists who would later return for other programs.

1975: Master classes in piano, strings, woodwinds, and brass are combined into the Music Performance Program under artistic director Thomas Rolston.

1976: Violinist and composer Zoltán Székely begins living at Banff Centre as the first artist in residence; he would remain here until his death in 2001; his presence had a massive impact on music programs, attracting international musicians to Banff Centre.

1976: Aaron Copland visits the Banff Centre and takes part in that summer's arts festival, lending his approval to the evolution of the music programmin.

1979: The first music residency program, Advanced Studies in Music, begins in the fall. The goal of this unique program was to fill a gap in the training of professional musicians and composers by freeing them from institutionalized learning and providing four to 26-week residencies for self-directed projects with artistic and career guidance. Faculty during the first year included Janos Sarker, Igor Oistrakh, Josef Suk, Menahem Pressler, Anton Kuerti, the Borodin Quartet, and Fine Arts Quartet.

1981: A celebration takes place at Banff Centre to honour the centenary of Béla Bartók’s birth with distinguished guests from Budapest. President David Leighton acts as moderator for a panel discussion on the influence of folk music on the compositions of Béla Bartók. Panelists include Zoltán Székely, Béla Bartók Jr., Lászlo Sómfai (head of the Bartók archives at the Franz Liszt Academy), and János Kárpáti (musicologist and head librarian at the Franz Liszt Academy).

1983: Banff Centre celebrates its 50th anniversary with many initiatives, including the creation of the triennial Banff International String Quartet Competition (BISQC), which remains one of the most popular events held here. The inaugural winner of BISQC is Colorado Quartet. Short-term summer residencies are added following the success of the fall/winter residency.

1985: Alberta-raised trumpeter Jens Lindemann attends Banff Centre’s music program. Lindemann went on to study at Julliard and would become an internationally celebrated trumpet player, and was the first Canadian trumpet soloist to be featured at Carnegie Hall. He has served as faculty at Banff Centre multiple times, and received the Order of Canada in 2015.

1991: Additional intensive programs are introduced and the length of all programs adjusted. More performance opportunities are created and collaborations established with several Bow Valley organizations. Concerts are scheduled regularly at the Banff Springs Hotel and a baroque series is presented at Banff’s Anglican and United churches. Weekly concerts commence at Creekside Hall in Canmore and Lake O’Hara Lodge near Lake Louise.

1994: The first Professional Musicians’ Skill Enhancement Program (later called Music Makers) is held (made possible by generous federal and provincial funding), allowing musicians to train at Banff Centre during the winter session. The musicians then spend three weeks presenting concerts and workshops to students and community musicians in Alberta.

1994: An audio program is added to the music department; short, intensive workshops and seminars are offered and co-productions developed with the Canadian Broadcasting Corporation, EMI, Marquis Classics, Centrediscs, Analekta and Bravo. In 2003 Banff Centre would host the Audio Engineering Society’s International Conference.

1995: A 10-week winter residency for Aboriginal Women’s Voices is held, resulting in the recording of a CD. The Afrocuban Festival of Music and Culture takes place at Banff Centre in the summer. Amernet Quartet wins the Banff International String Quartet Competition.

1999: Music programs are evaluated by Canadian Heritage assessors, resulting in very favourable comments and funding from the office of the Minister of Canadian Heritage. The assessors consider Banff Centre’s impact on professional development of musicians in Canada to be without parallel.

2002-2012: Dave Douglas serves as artist-in-residence and director of jazz programs. The program name changes to Banff International Workshop in Jazz and Creative Music.

2004: Tom and Isobel Rolston retire from full-time activity after nearly 40 years at Banff Centre. The music program they helped build had become recognized around the world as a unique learning environment where musicians could expand their artistic insights through interaction with distinguished visiting artists and with each other.

2006: Barry Shiffman, Canadian violinist and Banff Centre alumnus, is named the director of music programs and executive director of the Banff International String Quartet Competition (BISQC). Shiffman first came to Banff Centre with the Gifted Youth Program and returned for summer studies in chamber music and master classes. As part of the St. Lawrence String Quartet, he participated in a summer residency in 1991. Following the quartet’s first prize win at the 1992 BISQC and at the Young Concert Artists Competition in New York, Shiffman returned to Banff Centre as a member of the music faculty on several occasions.

2010-2013: Henk Guittart, co-founder of the Schoenberg Quartet and one of Europe’s most sought-after professors of chamber music, joins Shiffman as the co-artistic director of music. Since 2006, Guittart had served as artistic advisor of music programs and as special guest faculty; he would now lead the fall and winter music creative residencies.

2014: Music programming expands its fall and winter offerings to include several new music and multidisciplinary residencies exploring the role of music in contemporary society; programs include Concert in the 21st Century with Pedja Muzijevic, Source & Inspiration with Andrew Burashko; a creative music residency for classical musicians, songwriters, and composers; an indie band residency; a singer-songwriter residency; as well as electronic music and world music residencies and events that explore and invest in the ever-changing Canadian music scene.

2016: Rolston String Quartet wins the Banff International String Quartet Competition; the quartet is comprised of Banff Centre alumni who met on campus and named their quartet in honour of Thomas Rolston.