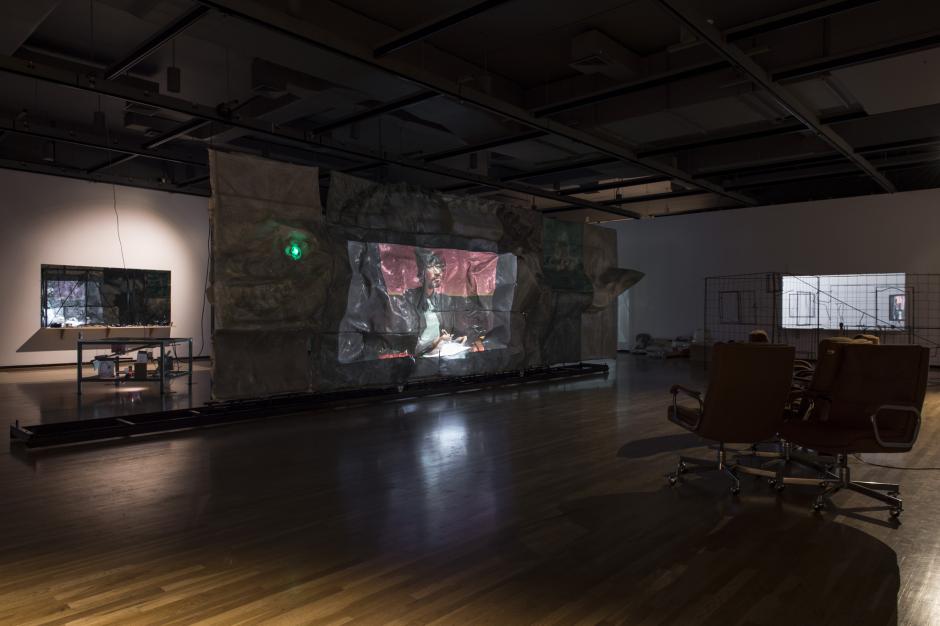 Counting on People was the North American premier of two new video artworks by the Algerian and French artist Neïl Beloufa. These works were co-commissioned by Walter Phillips Gallery and the Institute of Contemporary Arts, London (ICA).

Beloufa reflects on the influence that digital interfaces and information systems have on society today. Counting on People identifies the way in which technology functions as an omnipresent tool, rationalizing and interpreting all facets of life, and at the same time enabling individuals to communicate, develop new relationships and deepen existing partnerships. Avoiding a didactic approach to storytelling, Beloufa interrupts and abstracts traditional forms of narrative.

Home Is Whenever I'm with You and Data for Desire were both filmed on location, in and around Banff National Park and at Banff Centre in the summer of 2014. Home Is Whenever I'm with You (2014) is a science-fiction drama about a new global health epidemic. The story is told between characters through social media platforms like Vine and Skype, conveying how global communication via digital interfaces have generated new forms of imagery. Data for Desire (2014) explores and predicts - through statistical analysis devised by a group of French mathematicians - the personality traits and actions of young North American adults at a house party, attempting to map the unpredictable nature of physical attraction.

Also included in the exhibition were two earlier works by Beloufa. VENGEANCE (2014) is a collaboration between the artist and a group of French secondary school students. The students were invited to create a narrative informed by their personal interests. In this exhibition the voices of the characters created by the students are amplified and synchronised with CCTV camera footage, projecting live images of various sculptures within the gallery. In World Domination (2012) members of the public were invited to adopt the role of a presidential figure and resolve a political issue by declaring war upon another continent. They were then asked to evaluate how the war had settled the conflict. World Domination includes a large-scale sculpture of a dinosaur that references pre-human history, and also functions as a metaphor for the way in which the internet has reduced the hierarchy of images - where political news is afforded the same weight as viral content.

Our digital culture allows for a fluid association between users, hardware and content. Similarly, Beloufa invites each visitor to become an active part of the relationships between his videos and their challenging sculptural contexts. As you enter the gallery, you become part of a unique triangulation that mirrors our daily online lives.

Counting on People was previously presented this autumn at the ICA. The exhibition will continue next spring at La Casa Encendida, Madrid.

Walter Phillips Gallery gratefully acknowledges the support of the Canada Council for the Arts and the Alberta Foundation for the Arts and would like to thank Institute of Contemporary Arts, London, Bad Manner's, DICRéAM, The Consulate General of France in Vancouver, The Danjuma Collection and Beaux Arts Paris, France. 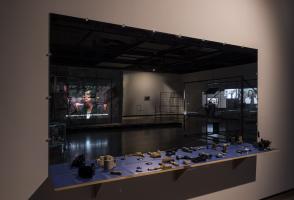 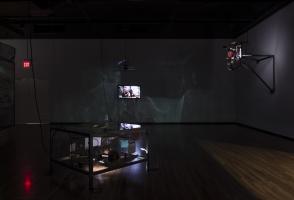 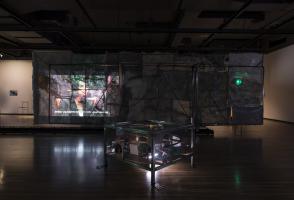 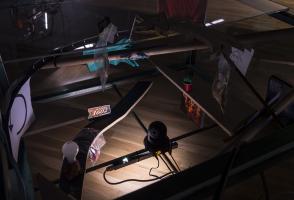 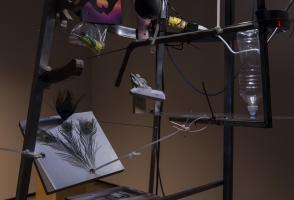 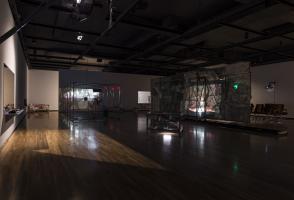 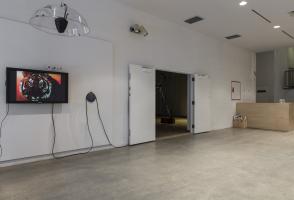 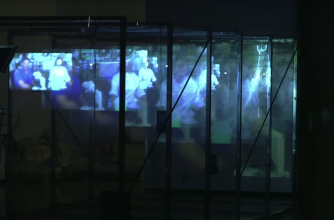 A social media-based sci-fi drama. A statistical map of the unpredictable nature of physical attraction. A dinosaur sculpture representing pre-human history. Neil Beloufa's work will draw you in...
Read More