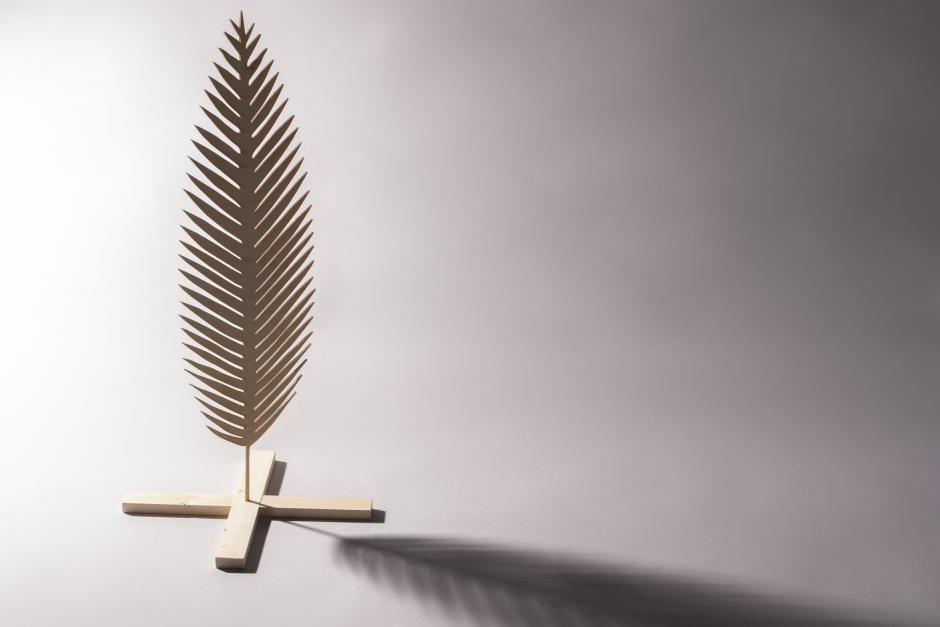 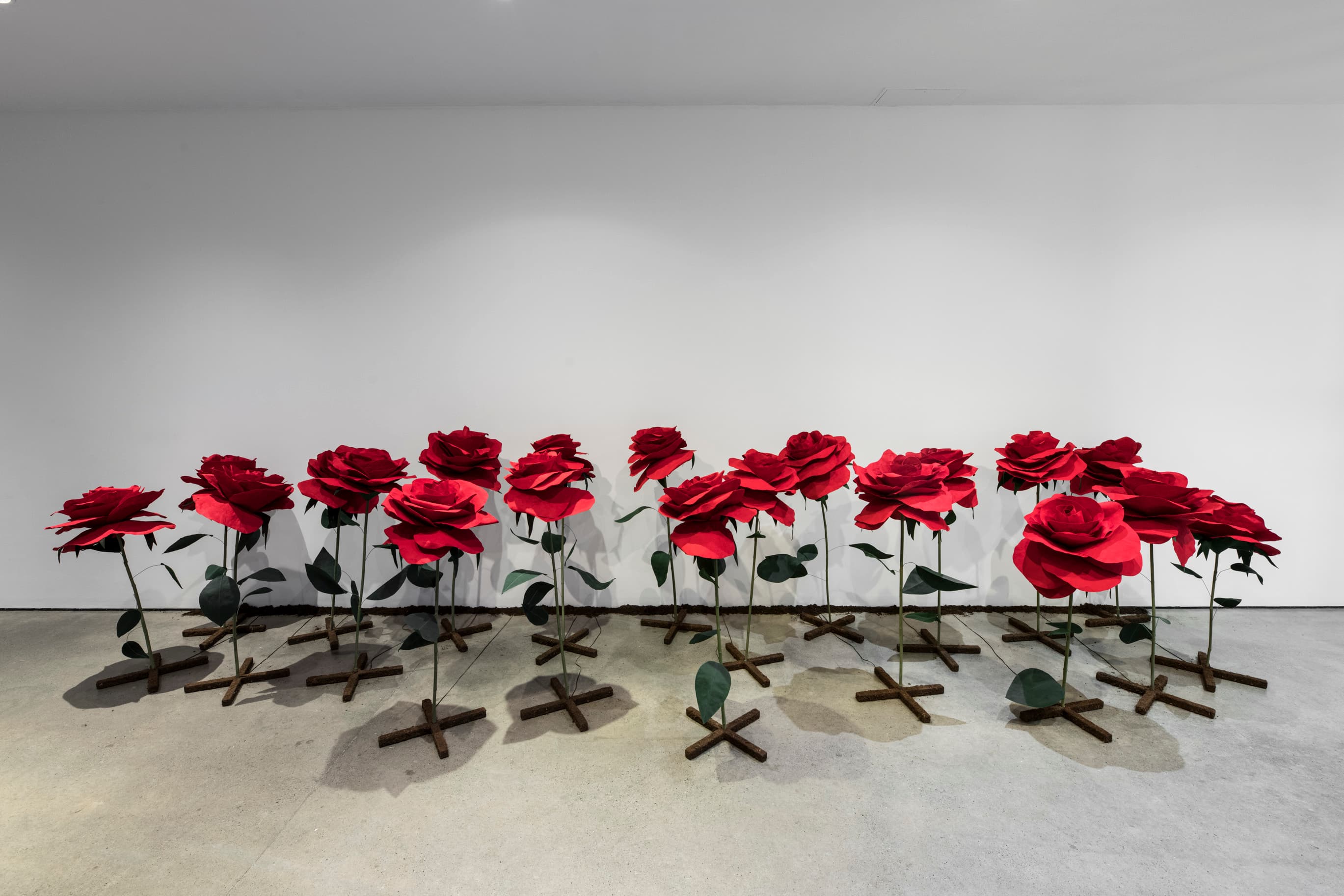 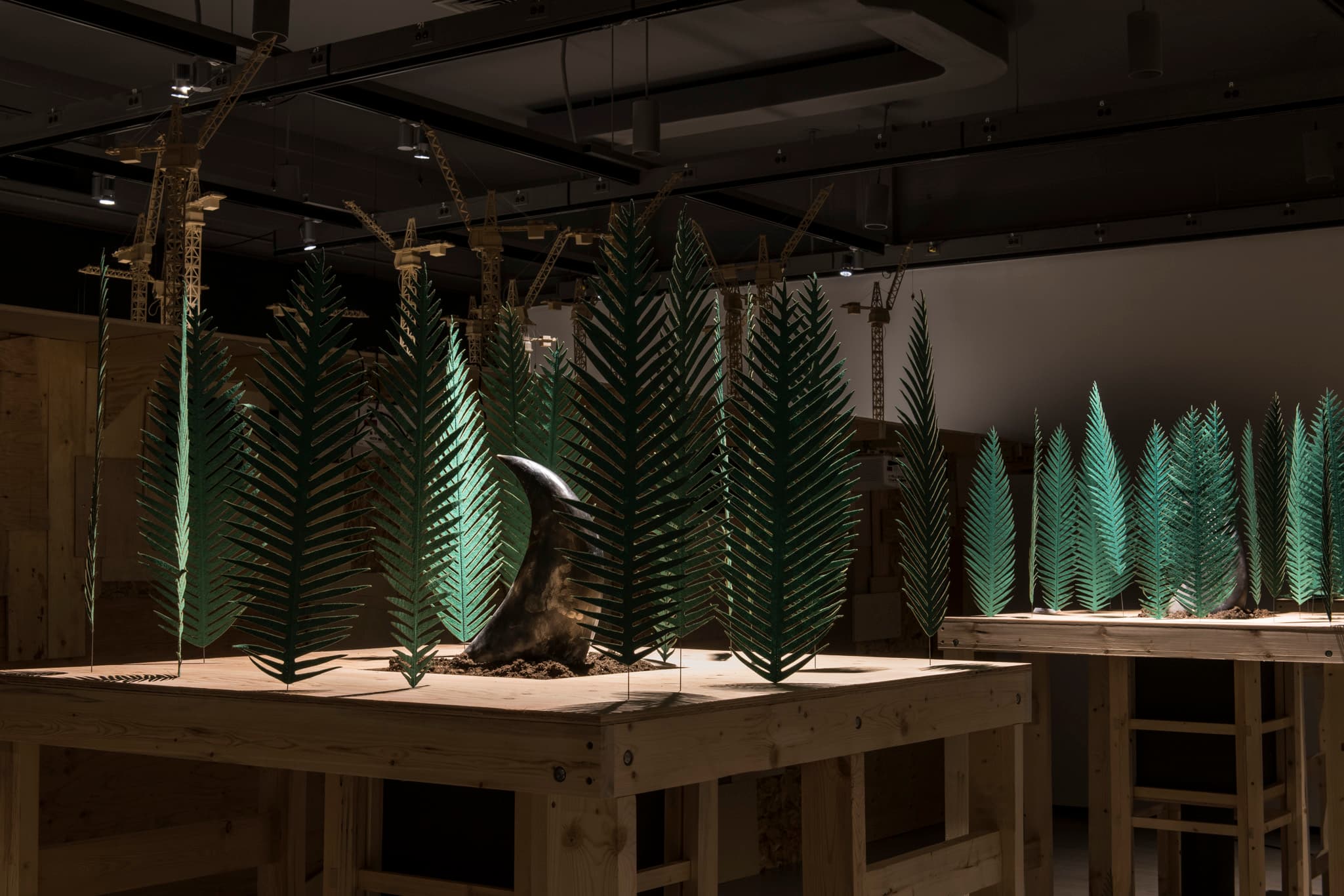 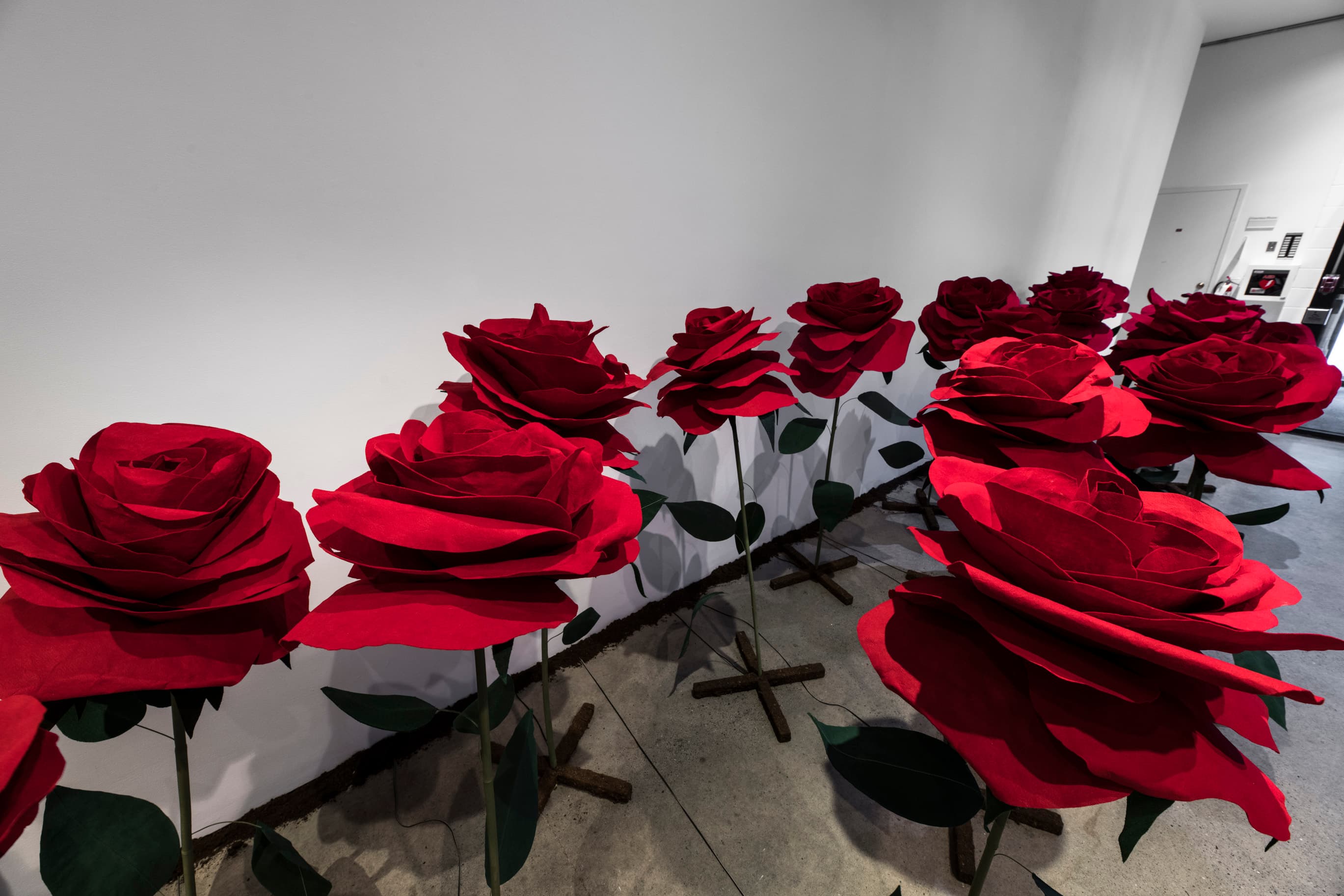 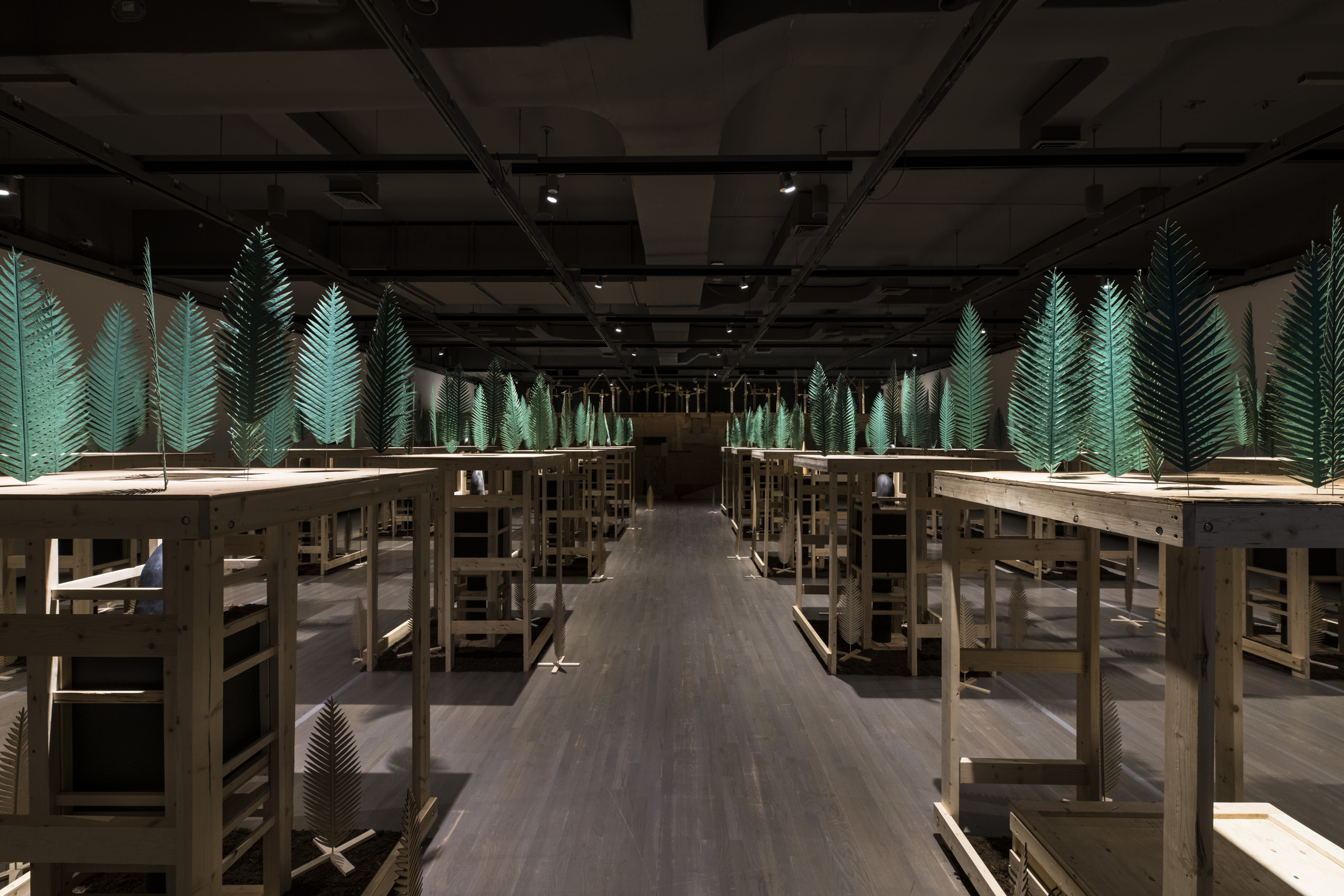 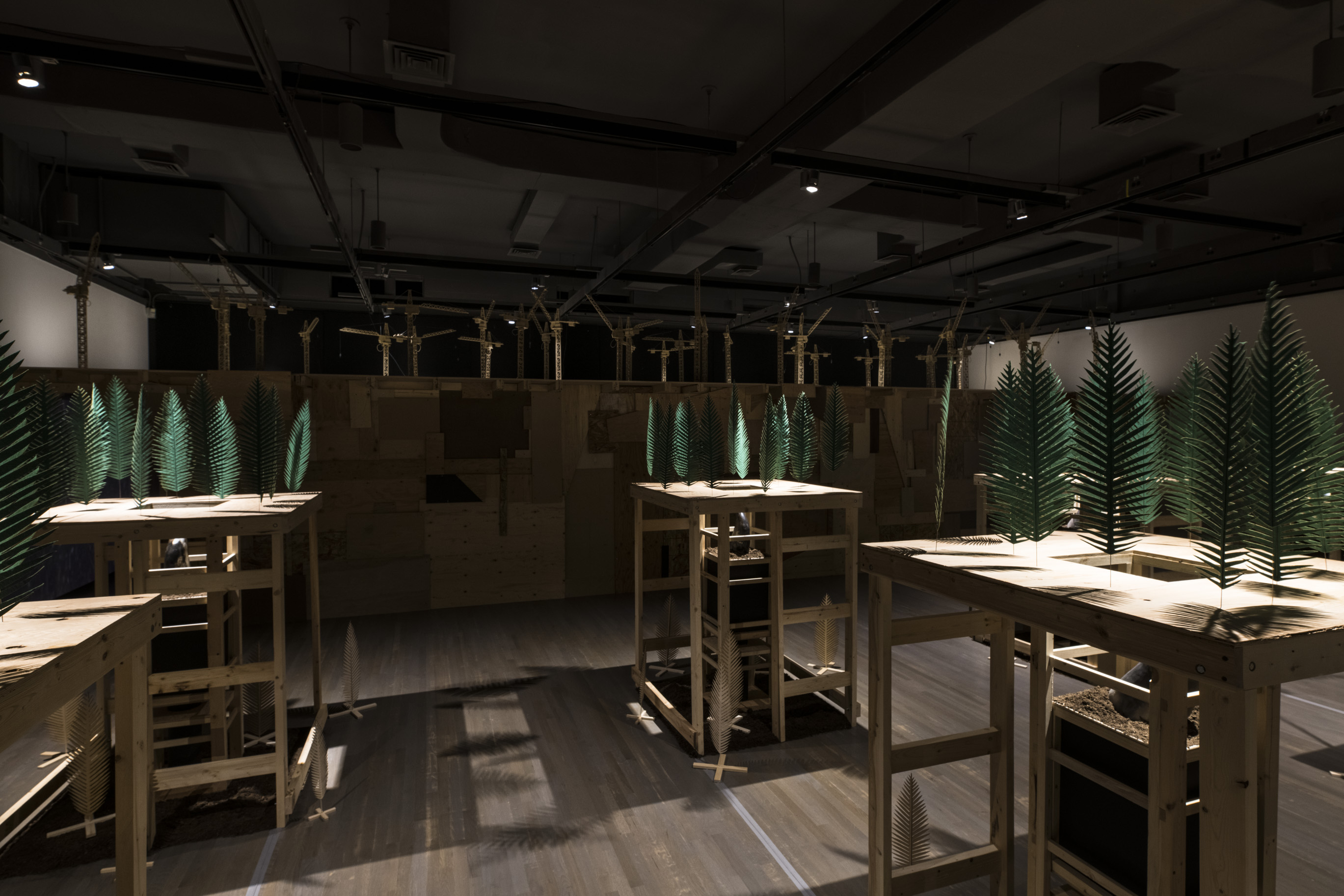 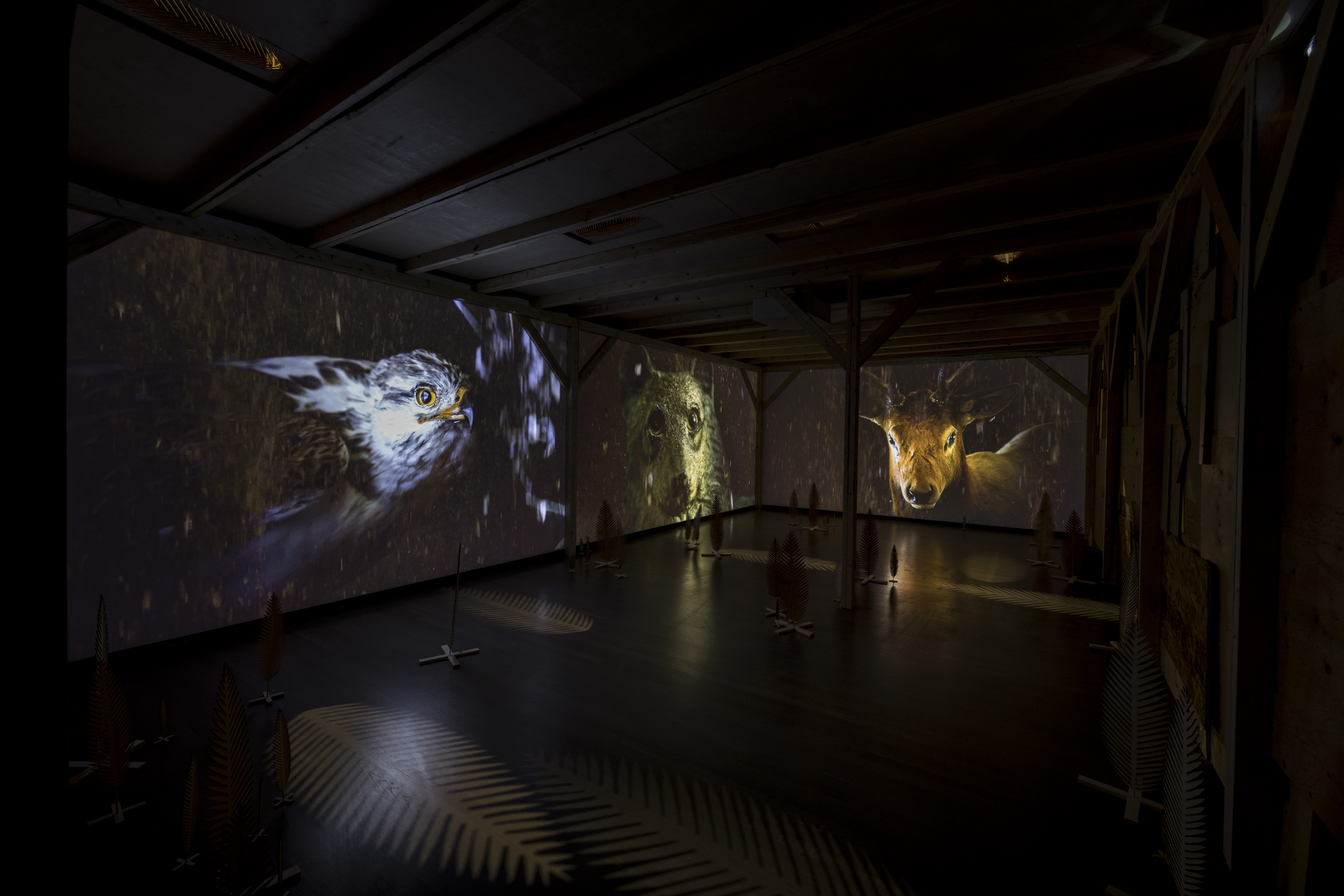 Nationally recognized for her complex installation-based works integrating electronic media, sculpture, sound, and performance, darkness is as deep as the darkness is by Calgary-based artist Rita McKeough is an invitation into an imagined subterranean just below the ground’s surface. Space where darkness connotes a richness of lived entanglements between beings above and below the soil, the work also references contested sites of urban development and extraction that penetrate into the burrows, roots, and remains of animals and plants. Assembling hundreds of sculptural elements, the work is characteristic of McKeough’s employment of what she terms ‘performing objects’; denoting the narrative roles she ascribes to each of the electronically-animated components within an installation. [1] While in recent works these objects have often been the sole ‘performers’, in an exuberant layering of the mediated, the corporeal, the invented, and the real, darkness is as deep as the darkness is will also feature periodic live performances by the artist.

McKeough’s recent bodies of work have reflected on questions of resource consumption, while at the same time acknowledging the artist’s own implication via the resources required to support the nature of her work. McKeough frames these installations as ‘propositions’ rather than as formal representations of ecologies, a critical distinction in their interpretation. [2] The site for much of this work’s narrative is in the soil itself, reflecting an understanding of the earthly substance as a present and historical enmeshment of plants, animals, and microbes. Referenced in the installation’s architecture which recalls an abandoned mine, it is also used within the sculptures in the exhibition’s second space. Claws and thorns produced from ceramic and wood are installed at the height of the artist’s eye and emerge from the earth where they have been churned to the surface by machines. As if piercing through a layer of topsoil, their positioning invites an understanding of visitors’ bodies as partially underground; intentionally destabilizing a sense of physical separation between terrestrial creatures and those below.

Soil is latent with histories of entanglement, its density a darkness of potential. Taking its cue from McKeough’s understanding of the material’s discursive possibilities, the exhibition draws on feminist scholar Donna Haraway’s use of the term, ‘compost’ as the premise for the inclusion of elements from past works by the artist, which have been newly recontextualized in this discrete installation. The life-giving by-product of multiple entities in mutually-supportive proximity, the term aligns with Haraway’s broader call to “make-with—become-with, compose-with—the earthbound”; as well as informing the transformation of components of McKeough’s previous works, which date from the past twenty years. [3] These elements include sculptural roses, refabricated based on those initially produced for the work, Tower of Silence (2000); mechanized cranes first included in the work, Wilderment (2010); and sculptural and performance elements from the work, H (2013). In a further extension of this relationship to soil, the exhibition is an invitation to dig into this larger body of work by McKeough, who has been a critical force as an artist and educator in Canada for decades. A fitting site for this exploration, darkness is as deep as the darkness is marks McKeough’s fifth exhibition at Walter Phillips Gallery, where she has previously exhibited in Informal Architectures (2007); Radio Rethink (1992); Social Space (1984); and Installations (1983); and is the artist’s first solo exhibition at Banff Centre.

Rita McKeough is an installation and performance artist based in Calgary. Her work incorporates audio, electronics and mechanical performing objects. Since the late 1970s, McKeough has been committed to creating chaotic and immersive installations that reconfigure contradictions and tensions in our everyday lives. She uses interactive technologies to represent complex interspecies relationships and to create links between her installations and sound and music practices. McKeough consistently works from a feminist perspective, and her recent work focuses on the environmental impacts of land development and the industrial extraction of natural resources. This recent work demonstrates her desire to use sound to create a rhythmic voice of agency and empathy to articulate forces of resistance in the natural world. McKeough’s work has been featured in Radio Rethink: Art Sound and Transmission (Banff Centre for Arts and Creativity, 1994), Caught in the Act: An Anthology of Performance Art by Canadian Women (YYZ Books, 2004); and Rita McKeough: Works (EMMEDIA Gallery & Production Society, M:ST Performative Art Festival, and TRUCK Contemporary Art, 2018). McKeough feels fortunate to have the support and assistance of her friends and community to produce her work. Following teaching appointments at the Nova Scotia College of Art and Design and Mount Allison University, McKeough is currently teaching at Alberta University of the Arts and she is grateful to have worked with so many extraordinary students and colleagues throughout her teaching career.

The artist would like to thank the following individuals: My deepest gratitude to curator Jacqueline Bell for the opportunity to develop this work and for her unwavering support. Thank you to the following individuals who supported its production: carpentry consultation and production – Jeremy Pavka; electronics consultation, programming and production – Ariel Ty; video consultation and production – Alex Moon; voice, cello and bass on audio recording (ferns) – Audrey Burch; voice (roses) – Eddie Nyikes; studio production – Rachael Chaisson, Eddie Nyikes and Jude Major; performance costume – Sarah Malik and Tira O’Daly; and various production – Brad Struble, Anna Semenoff , Stephen Nachtigall, Curtis Burns, Kay Burns, Jeanne Fries, Ann Thrale, Colin Brown, Brian Wennerstrom and Jocelyn Reid. I would like to acknowledge the contributions of Walter Philips Gallery staff, especially preparator Mimmo Maiolo, whose skill and dedication have made this installation possible; and Jeanne Fries and Allie Bartlett for their commitment to installing this exhibition. Thanks also to Tyler Jordan for video support; Joe Missio for audio installation; and to Brandy Dahrouge, Caitlin Sutherland, Audrey Bilodeau-Fontaine, Ildikó Barraclough, Victoria Lessard and Zoe Yang, and the Visual Arts program facilitators. My sincere thanks to Dylan McHugh who curated dig as deep as the darkness, and to Nan Capogna and the staff at Richmond Art Gallery. Love and respect to all.