Experience the works of the Digital Summit Art Installation, presented in four locations across Banff Centre campus.  These art works stimulate our expansive imaginings of art making practices in our digital world, and reflect upon the way in which technologies have embodied our visions of the future.   Whether through the creation and re-appropriation of computer programs,  performative displays of the artificial and the biological, exploring the historical, aesthetic conditions of a medium, or by drawing focus on the fears and desires that underlie our systems of socio-cultural knowledge production -  these artists invite us to take a critical look at our present world, absorb big questions about big data, and explore our personal and collective relationships with the rapidly evolving digital world.

Please note some installations have more restricted hours, those with differing hours are identified under their expandable titles below.

“Almost twenty years later, Kite now considers the confluence of youth culture and indigeneity with her installation Better off Alone (2018). Kite represents the uneasy truth that, for some Indigenous youth, the first representations they saw of Indigenous women, of Indigenous peoples, in popular culture were in Disney’s Pocahontas. Disney’s Pocahontas is a complex figure for Indigenous youth. You have to give it to P: she’s pretty badass, always going against her father, famously wondering, what’s waiting just around the riverbend. Her best friend is a racoon, she has dream visions, and she gets down with her kookum.

Disney’s Pocahontas was an early model of Indigenous feminisms for all the NDN kids out there, before age and experienced oppression complicated her representation, because it was Pocahontas’s relationship building, not the warriors, who would end the war between the settlers and her people. But Pocahontas was also a frequent commodification of the late 1990s. Her image sold pencils, cups, and even girl’s dresses cut and sewn to look like Indigenous clothing made of hide. Because Pocahontas was an idea, and a sexualized one to boot, she was an object upon which John Smith could project his ~nice guy~ ego, his adventure-seeking, kinder gentler brand of colonialism that set him apart from men like Governor Ratcliffe. Smith first laid eyes on Pocahontas when she was running around the forest in a skimpy hide dress that hugged her hourglass shape. He drew a gun on her but was ultimately softened by her full lips, and her hair as it caressed her face, blowing wildly and sensually in the wind. Somehow, despite the gun, despite the undertone of sexual violence that marrs their entire meeting, we, the audience, are supposed to believe both are swooned. Pocahontas’s savagery, as the would-be colonists put it, is how those dangerous white men, as Powhatan put, saw her. The same fascination with the savagery of Indigenous peoples leads to another kind of nostalgic child’s play centred around voyeuristic representations of Indigenous peoples such as culture camps for kids that appropriate language and visualities from indigenous communities.

But with Better off Alone, Kite juxtaposes Pocahontas’s image with underground rave culture, exhibiting kandi—brightly colored jewelry made of plastic—from her own loner youth, and even one that spells out "pokahontas" in lettered beads. Who is pokahontas, the club kid persona and raver? We know she teaches John Smith about the colours of the wind, getting him all high and shit, talking to rocks and trees, flying through the air with holographic deer while her body feels like paint strokes that fade in and out of the wind’s current. What a trip—and pokahontas is the trip guide. Her visions expose that humans are all connected to one another in a circle, a hoop, that never ends—that otter are kin. She blows minds. Like raver culture, and youth scenes generally, the internet was, and is, used as a means of digital connection. At the onset of the internet, early message boards and chat rooms created digital networks for NDN youth such as Kite and kandi kid pokahontas. In the place of voyeuristic fascination with Indigenous savagery that can motivate settler child’s play, Kite finds joy in the creation of computer programs that make computer’s bark, for instance. Kite has reclaimed NDN play for those whom it rightfully belongs to, her own brand of NDN child’s play re-appropriated.”

Presenting a pair of robotic vacuums with potted rubber trees strapped to their backs, Roomba Rumba pivots on solidarities between natural and artificial, biological and machinic, behind-the-scenes service work and performative display. The Roombas’ algorithmic movements look choreographed and charismatic, giving us the impression that they are alive, flirtatious, and social. Their leafy dance is accompanied by a karaoke backing track for “High Hopes,” a song made famous by Frank Sinatra. The song’s hero, a “little old ant,” is a worker who overcomes adversity to move a rubber tree plant through irrational aspiration and hard labor. Here the ant is recast as an even more perfect worker—a machine.

Special Hours:Friday Nov 22: 10:00am – 7:00pm
Saturday Nov 23: 12:00pm – 5:00pm
Sunday Nov 24: 11:00am – 5:00pm
In Knock Knock, two speech-enabled smart devices go head-to-head when one Alexa tries to guess a cryptographic key known only to the other. Their guessing game begins like the familiar children’s game prompt I’m thinking of a number… However, this number relies on SHA-256, the same encryption used by blockchain technology. The only way to win is through “brute force,” that is, by trying random 64-digit combinations until luck prevails. This installation features Amazon Echo devices with custom Alexa Skills and programming by Stream Gao.

It’s Kind of a Scary Feeling is a site-specific, multi-channel projection combining live observation and pre-recorded text sourced from social media sites. Yezbick juxtaposes live transcriptions with chat threads from sites such as Nextdoor.com and TripAdvisor.com on topics relevant to property ownership, private security and tourism. The chat threads are interspersed with typed text by live performers staged throughout the exhibition. Recombining these threads, she makes apparent how banal attitudes towards safety, security and consumption lie at the very foundation of neo-imperialist oppression represented through everyday discussions online. Projected as live-typed text, social media bloggers become omnipresent as active bodies typing elsewhere.

Casually observing the audience members, the performers are camouflaged from behind laptops, noting how visitors in the space are engaging and moving through the exhibition, who is and is not present, and how viewers are responding to their presence. While the performers appear to be typing into chat boxes online, their messages emerge as enlarged live projections in the space, creating an uncanny proximity of the actions in the room to online discussion threads.

Their transcriptions reference a history of empirical study, and draw into focus base desires and fears underlying socio-cultural knowledge production: the longing for clarity, to feel slightly removed from or above the unpredictability of our lives. It’s Kind of a Scary Feeling questions this seat of power by making empirical study itself a subject to be scrutinized. Drawing observation back in on itself, Yezbick connects how societal attempts to structure life’s precarity play out in interactions online and confronts us with how we create false narratives of safety, security and fear.

The work of Toronto artist T.M. Glass opens a door to other ways of considering photography by exploring the historical, technological and aesthetic conditions of the medium to stretch it beyond its traditional definition. Utilizing cutting edge photographic technology, the artist works with each image to create complex details and textures using a digital painting technique developed throughout the years.

An alumnus of Ontario College of Art (now OCAD University) in the fine art program with a major in sculpture and a minor for painting, the artist decided to focus on photography in 2010. Propelled by the desire to create works of art that focus on the investigation of beauty in nature and how mathematics and geometry govern the nature of beauty, the artist strives to create beauty though proportion, symmetry and harmony.

Stemming from a deep, personal engagement in horticulture, the artist’s primary subject matter became the persistent allure of flowers. Glass pairs flora from renowned gardens with historic vessels from museums and distinguished collections. The artist works directly with curators to arrange photography sessions and understand the vessels’ history. The resulting lens-based digital paintings seem like a traditional photograph from afar, however, upon closer inspection the depth of the work is revealed in colours and textures unique to Glass’ practice. A single work may demand months of production time.

Rotospace is an experiment in 360 degree sculpture projection and kinetic motion by Cuatro Cabezas. This newly formed collective is exploring how digital technology and sculpture enter into a dialog by augmenting one another while maintaining the unique attributes intrinsic to each form.

Cuatro Cabezas (‘four heads’ in Spanish) is a newly-created artistic group consisting of sculptors, Danira Miralda and Edward Perez Beltran (Incipio Modo) and media artists Laura Anzola and Matthew Waddell (AZMA Digital). Danira and Edward have been working collaboratively since 2010 on projects that range from abstract and figurative studio work to public art commissions, both in the built and natural environment. They both have a wide skill set in modelling, carving and designing. Matthew and Laura have been involved with digital arts for the last eleven years, and have been working collaboratively since 2014, creating award-winning audiovisual design for theatre, as well as developing interactive installations, architectural projection mapping, animations, graphic design, and surround-sound audio works. Our work is shaped by our home countries of Mexico, Colombia and Canada and likewise the relationships we have with Spanish and English.

Cuatro Cabezas acknowledges the support of the Canada Council for the Arts.

Logical Conclusions is a collection of logic puzzles, which follow the logic of real algorithms that are being used to make decisions about people, from Trust Scores that the Chinese government is issuing to its citizens, to the Facebook news feed algorithm. Step into this school for young algorithms and see how they “think” by completing the puzzles for yourself. Each one is accompanied by an illustration – as though it were part of an elementary school primer. Read the puzzles, then move the pieces (statements which make up each premise) around, eliminating repeated elements as you go, creating a logical chain to lead you to the “correct” conclusion, given that all the statements must be taken as fact. At least as far as the computer is concerned. Do you think the first-order logic behind these puzzles, which mirrors the first-order logic used by computers, leads to logical conclusions? 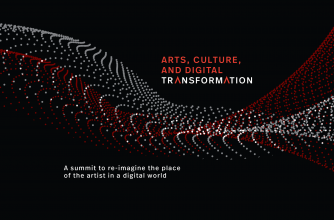 Experience this three-day summit that aims to ignite national action and enthusiasm around Canadian art-making practices in a rapidly digitizing world. The summit will promote new learnings and...