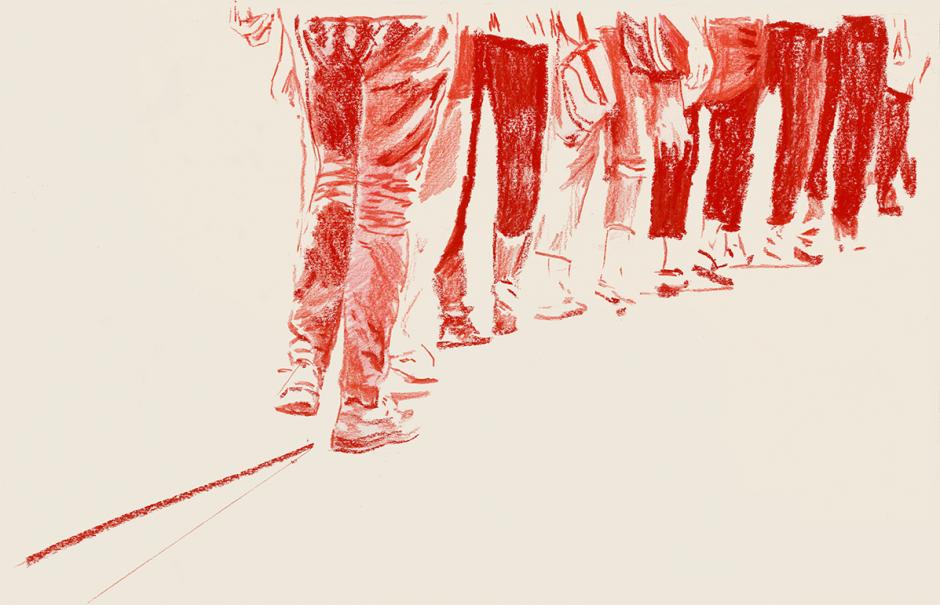 Guidelines is an argument for accessibility in words and image, touch and sound. The first collaboration between Vancouver-based artists Carmen Papalia and Heather Kai Smith, the exhibition develops from Papalia’s understanding of “accessibility as a social practice” – a temporary experience that requires a relational approach to mutual care. This understanding is central to the conceptual framework that Papalia developed in 2015. Termed “Open Access”, this set of five tenants draws on Papalia’s experience as a non-visual learner, a term he chooses to identify with over the medicalizing terminology of blind or visually impaired. With recognition of the important role of rights-based models for accessibility as codification of certain standards, Open Access articulates an expanded framework that centres the individual seeking access as the expert on their own needs; opening the possibility for a transfer of power in the naming of these needs from policy to individual. As a set of guidelines, this framework serves as the conceptual grounding for the exhibition, and is articulated by Papalia in the new sound work, Open Access: Claiming Visibility (2019).

These guidelines are extended into the physical realm through Papalia’s work, Red String (2015-ongoing). In past institutional engagements, Papalia has temporarily wrapped cord around physical features within a gallery or museum to serve as a guide for the navigation of frequented routes. As performance documentation, a touch-based installation, and an elegant drawing in space, the string stands as broader metaphor for Papalia’s alignment of the conceptual with the functional within his practice; in this case, enacting a temporary measure to improve his own access which requires those who encounter it to physically negotiate this claim of agency within a disabling physical environment.

Unique to this iteration of Red String is an exhibition design developed in collaboration with Goodweather Studio which serves as a purpose-built space for the work’s enactment. Visitors are encouraged to move between fourteen freestanding, mirrored structures, each positioned at a specific angle to refract the singular into the multiple. To destabilizing visual effect, Papalia’s string weaves between these mirrored walls, creating a visual field of intersecting red lines. With these refractions challenging an ease of navigation via the use of sight, visitors are invited to engage with the red string as a tactile wayfinding device. In playful paradox, it is the visual that is used to decentre the ocularcentric, defined by art historian Amanda Cachia as "the longstanding bias toward vision in Western thought and culture." [1]

The red string transforms into a hand-drawn line in the accompanying three-channel animation, Open Access: Claiming Visibility (2019), offering a non-linear interpretation of Open Access as described in the sound installation of the same name. Primarily working in drawing, Heather Kai Smith's work engages ideas of mutual support through careful renderings of archival protest documentation. In one segment, the animation depicts marchers in the historic 1977 protest, 504 Sit-In, which intended to force compliance with critical legislation passed during the movement for civil rights by persons with disabilities in the United States. This depiction of the protest line plays in relation to an animated vignette based on Papalia’s performance, Blind Field Shuttle (2011-ongoing), which takes the form of a walk in public space with participants who close their eyes and form a single line behind him, placing their hands on each other’s shoulders as a guide. In a continuation of the motif of the line carried through exhibition, a series of five drawings by Smith depict configurations of the string game, cat’s cradle, recalling the ways young people learn the possibilities of temporary co-creation and mutual trust. Joining many hands, the works in Guidelines recall the ephemeral nature inherent in a relational approach to accessibility and its grounding in the social. 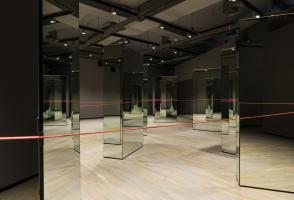 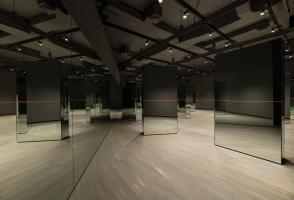 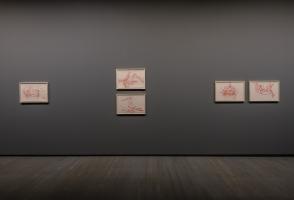 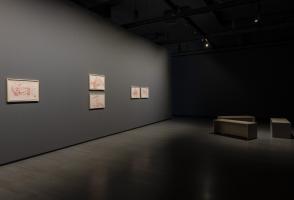 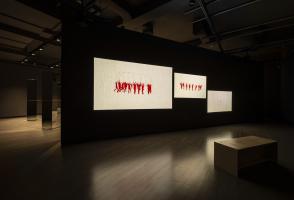 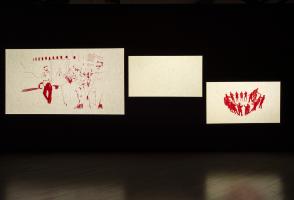 Carmen Papalia is an artist who uses organizing strategies and improvisation to address his access to public space, the art institution, and visual culture. Born in Vancouver, unceded Coast Salish territory in 1981, his socially engaged practice is an effort to unlearn visual primacy and resist support options that promote ableist concepts of normalcy.

Papalia’s walks, workshops, and interventions are an opportunity to model new standards and practices in the area of accessibility. He approaches the museum as a colonial enterprise that has benefited from a tradition of cultural violence; a platform that contains valuable cultural resources, which is marginalizing by design. His work has been featured at The Solomon R. Guggenheim Museum (New York), Tate Liverpool, Harvard Art Museums (Cambridge), Grand Central Art Center (Santa Ana), and Gallery Gachet,(Vancouver), among others.

Papalia is the recipient of the 2014 Adam Reynolds Memorial Bursary and the 2013 Wynn Newhouse Award. He holds a BA from Simon Fraser University in Vancouver and an MFA with a focus in Art and Social Practice from Portland State University. His current work includes an advocacy platform based on the principles of Open Access (2015) and an accessible mobile work-space and archive that provides a context for programming about accessibility at the institutions that he visits.

Heather Kai Smith is an artist who currently lives and works in the unceded Coast Salish Territory known as Vancouver. She completed her MFA at the Emily Carr University of Art and Design (2017), and her BFA in Drawing from the Alberta College of Art and Design (2009). Her current practice explores the potential embedded within archival images of protest, collectivity, and intentional communities activated through drawing, observation and iteration. Rooted in the practice of drawing, her work has lent itself to projects in animation, printmaking, and installation.

Smith has attended residencies across the United States and in Germany, while exhibiting her work within a variety of institutional and non-conventional spaces. Smith has participated in and facilitated workshops and collaborative projects across Canada and the United States. Her visual work was recently exhibited in Beginning with the Seventies: Collective Acts, at the Morris and Helen Belkin Gallery in Vancouver, curated by Lorna Brown. She is currently a non-regular faculty member in the Audain Faculty of Art at Emily Carr University of Art and Design.