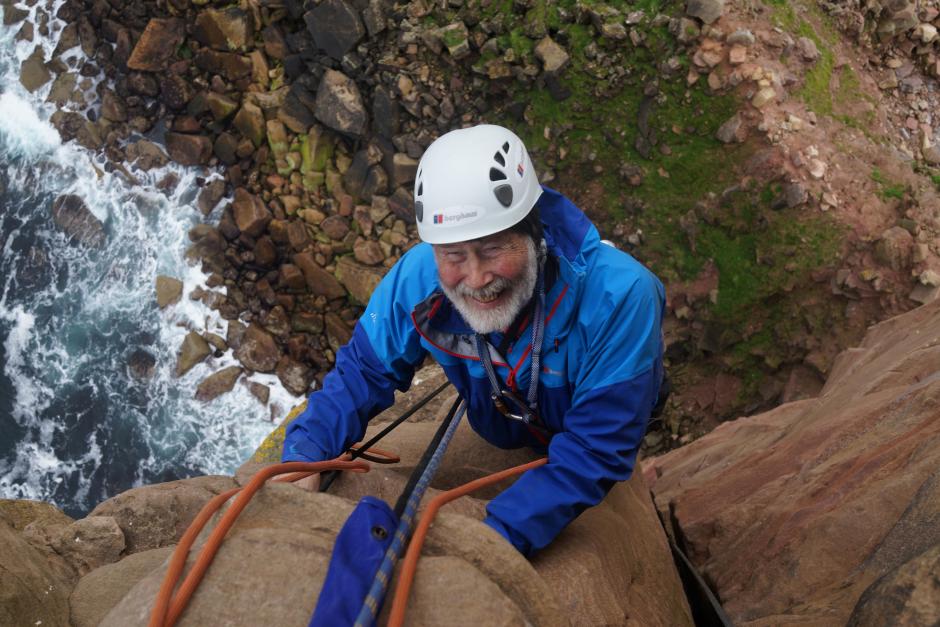 BANFF, AB, August 2, 2017 – The Banff Mountain Film and Book Festival is proud to announce Sir Chris Bonington, one of the most celebrated mountaineers of all time, as headline presenter for the 2017 Festival in Banff, Canada. His career includes 19 expeditions to the Himalayas and numerous firstascents, including as expedition leader of a trip to the South Face of Annapurna in 1970, and reaching Everest’s summit in 1985.

The Banff Mountain Film and Book Festival takes place from October 28 – November 5, 2017,and is hosted by Banff Centre for Arts and Creativity in Banff National Park in the Canadian Rockies. Over 75 films will be presented and audiences will have the opportunity to ask questions and learn from the world’s finest climbers,photographers, writers, explorers, and more.

“One of the most captivating aspects of this Festival is the chance for people to meet their heroes and we are excited to present living legends Sir Chris Bonington and Tommy Caldwell to audiences in Banff.”

Programming Director, Joanna Croston added: “We pride ourselves in bringing a great deal of variety each year to the Festival and this year’s lineup represents everything in the global community from biologists to mountaineers to archaeologists.”

During his illustrious career, Chris Bonington reached the summit of Everest, wrote 17 books and, now in his 80s, is still active in the mountains. The World Premiere of Bonington: Mountaineer, will be followed by an in-depth discussion between Bonington and writer, climber, and psychologist, Geoff Powter.

Witness the art of exploration across high mountains, barren desserts, and lush rainforests from the 1600s until today—through the sketchbooks of 70 explorers. British historian and award-winning author Lewis-Jones delivers the stunning profiles,expedition details, and artwork of pioneering explorers, ecologists, mapmakers, and anthropologists.

Follow Britain’s unlikeliest hero-mountaineer and funny man Andy Kirkpatrick, on an 18-day solo ascent of El Capitan, Yosemite, in the World Premiere of Psycho Vertical – a raw and intimate portrait of one of climbing’s most interesting figures.

Born in Southern Tyrol in 1986, Tamara Lunger holds numerous ski mountaineering national titles, is the youngest woman to have reached the summit of Lhotse, and has summited K2 without supplementary oxygen. She joins us to talk about her illustrious career.

The stars of the 2016 Festival film Dodo’s Delight, Favresse and O’Driscoll always seem to push the harsh realities of life on the big wall aside with the help of a few musical interludes and the occasional bout of humorous, nonsensical behavior. They join us to recount the laughs they had on The Coconut Connection (5.12d), a challenging, big wall route on Baffin Island.

Legendary American rock climber Tommy Caldwell joins us to share his latest accomplishment—a newly published memoir The Push: A Climber’s Journey of Endurance, Risk, and Going beyond Limits which he fine-tuned at Banff Centre under a Paul D. Fleck Fellowship (a fully-funded artistic residency at Banff Centre’s Leighton Artist Colony, giving time and space to accomplished artists to realize their projects) in 2016.

About Banff Mountain Film and Book Festival: Created 42 years ago, the Banff Mountain Film and Book Festival has become the premier event of its kind in the world. The nine-day Festival hosted by Banff Centre for Arts and Creativity in Banff, Canada, showcases the world’s best films, books and photographs on mountain subjects – climbing, culture, environment and natural history, exploration and adventure, wildlife, and sport – and attracts the biggest names in mountaineering, adventure filmmaking, and extreme sports as presenters and speakers. An international jury will also award over $50,000 in prizes for films and books submitted to this year’s Festival competitions.