On September 4th at 2 p.m. MT, these three quartets will enter a final round of competition, performing a complete work of Beethoven before a full house in Banff Centre’s newly renovated Jenny Belzberg Theatre. Opus13 will take the stage first, followed by Balourdet and Isidore.

The final concert of this week-long event will be live streamed at www.banffcentre.ca and on www.theviolinchannel.com. The winning laureate quartet will be announced at an awards ceremony at 7:30 p.m. MT following the finals round on Sunday afternoon.

Founded in 1983 to mark the 50th anniversary of Banff Centre, BISQC gives audiences an in-depth and behind-the-scenes look at the thrill and heartbreak of a live chamber music competition as nine of the world’s best young string quartets vie for over $500,000 CAD in cash, prizes and opportunities, including the Christine and David Anderson Prize of $5,000 CAD for each of the seven quartets not advancing to finals. The triennial competition is a member of the World Federation of International Music Competitions and is widely recognized among the top events of its kind.

In addition to generous cash prizes, the laureate quartets are offered residency opportunities at Banff Centre and, for the first prize laureates, a custom-designed three-year artistic and career development program which includes the Southern Methodist University Peak Fellowship Ensemble-in-Residence Prize, a two-year paid residency worth $200,000 CAD, an Esterházy Foundation Residency with concerts at Haydn Hall in Eisenstadt and the Lucerne Festival, an opportunity for a two-week Chamber Music in Residency at the prestigious Britten Pears Arts in England, as well as the St. Lawrence String Quartet's "John Lad Prize" - BISQC winner's concert on the main stage of Stanford University's Bing Recital Hall for Stanford Live's series in 2022-23.

Banff Centre is grateful to our media partners who help us share BISQC with music lovers across Canada and around the world. Thank you to the Canadian Broadcasting Corporation, the Violin Channel, and all the media who attended this week.

There will be a press conference with the winning quartet following the awards ceremony at 8:30 pm at Banff Centre. Please contact Casey_Peirce@banffcentre.ca for more information.

For more information about the competition and competitors, visit bisqc.ca 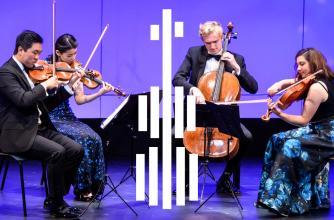