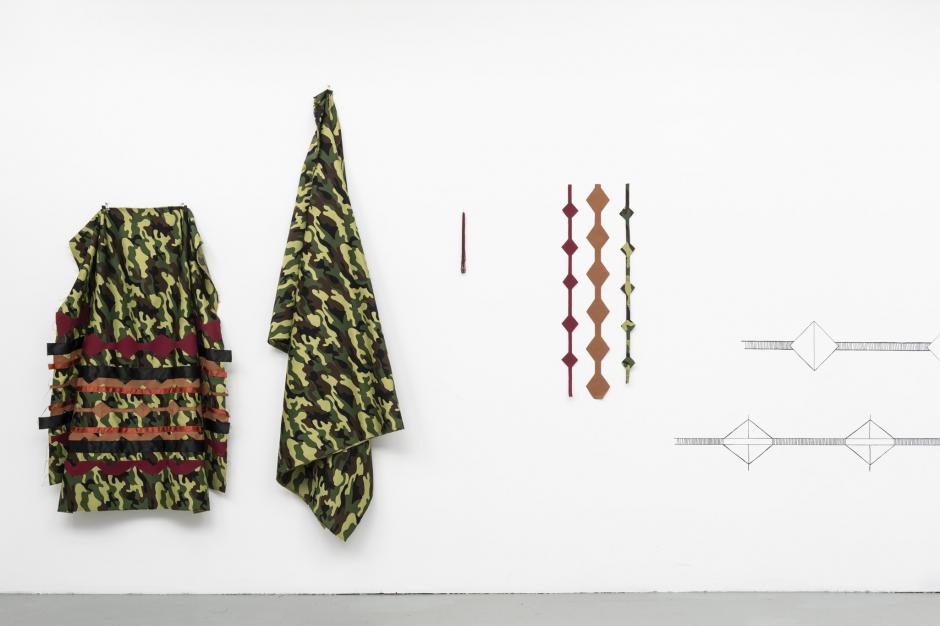 Meagan Musseau, Our People Up The River. Wall drawings and textiles. Studio experimentation at Banff Centre for Arts and Creativity, 2018.

BANFF, AB, April 2, 2019 – Interdisciplinary visual artist Meagan Musseau (Elmastukwek, Ktaqmkuk territory –– Bay of Islands, Newfoundland) will embark on a multi-city, national speaking tour starting April 14, 2019, at The Rooms in St. John’s, Newfoundland. Musseau is the winner of the 2018 Emerging Atlantic Artist Residency, which includes an eight-week fully funded residency at Banff Centre for Arts and Creativity followed by the opportunity to travel across Canada to speak about her experience and project.

“The residency opened an exciting space to work towards my original project goals,” said Musseau. “I fully immersed myself in a creative process and came out with a collection of wall drawings, materials and designs for garments, and ideas for a new media installation. During the speaking tour, I will share details about the artwork I created at Banff Centre for Arts and Creativity and how it fits into the trajectory of my practice.”

Musseau works with customary art practices and new media, such as beadwork, basketry, land-based action and installation to explore notions of memory, language, and the relationship between land and body, object and narrative. During the residency, she focused on creating artwork in response to a collection of Beothuk caribou bone pendants held in the vault at The Rooms provincial museum in St. John’s, NL. Musseau seeks to symbolically reclaim these pendants while honouring the dreams and strength of her relations through artistic creation.

The Emerging Atlantic Artist Residency is a partnership with Banff Centre and the Hnatyshyn Foundation, and funded through the support of the Harrison McCain Foundation. The Residency aims to strengthen cultural connections between eastern and western Canada by giving one emerging visual artist from Atlantic Canada the opportunity to create new work within the inspiring surrounds of Banff Centre over a period of eight weeks.

About The Hnatyshyn Foundation: Established by the late Right Honourable Ramon John Hnatyshyn, Canada’s twenty-fourth Governor General, the Hnatyshyn Foundation is dedicated to promoting and funding emerging, developing, and mid-career artists and curators in Canada through grants, residencies, and prizes totaling $200,000 annually. Its programs are funded by donations from individuals, private foundations, government, including the Department of Canadian Heritage, and corporations. rjhf.com