Banff, Alberta, October 1, 2014 -- Following the success of last summer’s groundbreaking production of #UncleJohn, The Banff Centre is pleased to announce it will collaborate again with Against the Grain Theatre (AtG) and Canadian Opera Company (COC) for a one-of-a-kind, immersive, performance-based training program that will take opera off the stage and into the community. A new production of Mozart’s Così fan tutte, re-titled A Little Too Cozy, will be at the heart of the program.

"The Banff Centre is proud to provide a unique development experience for emerging opera artists through our expanded collaboration with Canadian Opera Company and Against the Grain Theatre. These organizations bring together the best in the traditions of opera and new directions in the art form,” said Carolyn Warren, vice president of arts at The Banff Centre. “We welcome the opportunity to offer this unique collaboration opportunity to artists from across the country.”

Called Open Space: Opera in the 21st Century, the program will run from June 22 to July 26, 2015 at The Banff Centre under the leadership of Against the Grain Theatre’s artistic director Joel Ivany and music director Christopher Mokrzewski. Guest faculty members will include Canadian Opera Company general director Alexander Neef, Canadian baritone Russell Braun, vocal coach Michael McMahon and playwright Daniel MacIvor, among others.

“The inaugural year of the program represented a truly significant moment for AtG. It gave us a chance to share our ethos and approach with a much wider audience, because the impact of #UncleJohn was felt even by those who were many provinces away,” said Ivany. “Once again we look forward to learning from each other, thinking about things differently, and providing a unique opportunity for young artists to flex their operatic muscles in new ways. There is something liberating in what we're doing. We pay respect to what has been done, but we're also creating something brand new and original."

Following auditions in Toronto, Montreal and Vancouver from November 17 – 21, 2014, 12 emerging professional opera singers and one assistant répétiteur will be invited to a five-week residency devoted to practical skill extension and development, while preparing and performing A Little Too Cozy. This modern adaptation will feature a new English libretto by Ivany. The program will also undertake a workshop of James Rolfe and Anna Chatterton's new opera, Donna, an English-language re-imagining of Mozart’s Don Giovanni, commissioned by the Canadian Opera Company.

“From the moment we arrived at The Banff Centre last summer, we hoped to return,” said Mokrzewski. “It is a magical space that lives and breathes creativity, so it’s clear why it attracts some of the most talented musicians in the country. Our collaboration with The Banff Centre and the Canadian Opera Company on #UncleJohn was an incredible success, and I’m delighted to continue the Open Space program alongside such esteemed colleagues.”

Each week will balance rehearsals, regular performance opportunities in the community and collaborative skill exchange between faculty and artists. Applications for Open Space: Opera in the 21st Century will be accepted until October 29, 2014.

"I'm looking forward to continuing the Canadian Opera Company's collaboration with The Banff Centre and Against the Grain Theatre following the success of our efforts this past summer," said Neef. "I am particularly excited about the workshop of the COC's commission, Donna. The creative innovation and artistic rigour of the Open Space program provide the perfect environment for this new work to flourish. Our colleagues at Against the Grain have bold and exciting ideas that transform how audiences engage with opera, and The Banff Centre has an extraordinary immersive atmosphere and hands-on training. It is a pleasure for the COC to once again collaborate with them on this program."

Having been polished in Banff during last summer’s inaugural Open Space program, #UncleJohn will make its Toronto debut when Against the Grain Theatre presents it at The Black Box Theatre of The Great Hall, a vintage west end rock venue from December 11 to 19, 2014. Featuring the dynamic young Cecilia Quartet in a piano quintet arrangement, the production will be updated to reflect its surroundings of Queen Street West. More information may be found at www.againstthegraintheatre.com

For more information about Open Space: Opera in the 21st Century, visit banffcentre.ca

About The Banff Centre: The Banff Centre's mission is inspiring creativity. Over 8,000 artists, leaders, and researchers from across Canada and around the world participate in programs at The Banff Centre every year. Through its multidisciplinary programming, The Banff Centre provides them with the support they need to create, to develop solutions, and to make the impossible possible. Moving forward, the Centre will disseminate the art and ideas developed in Banff using new initiatives in digital, web, radio, and broadcast media.

About Canadian Opera Company: Based in Toronto, the Canadian Opera Company is the largest producer of opera in Canada and one of the largest in North America. The COC enjoys a loyal audience support-base and one of the highest attendance and subscription rates in North America. Under its leadership team of General Director Alexander Neef and Music Director Johannes Debus, the COC is increasingly capturing the opera world’s attention. The COC maintains its international reputation for artistic excellence and innovation by creating new productions within its diverse repertoire, collaborating with leading opera companies and festivals, and attracting the world’s foremost Canadian and international artists. The COC performs in its own opera house, the Four Seasons Centre for the Performing Arts, hailed internationally as one of the finest in the world. Designed by Diamond Schmitt Architects, the Four Seasons Centre opened in 2006, and is also the performance venue for The National Ballet of Canada. www.canadianopera.ca 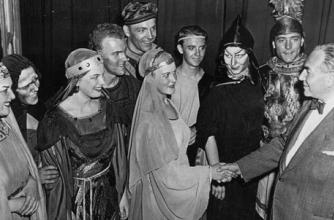 A Brief History of Opera at Banff Centre