The Banff Centre receives $1.075 million from RBC in support of Indigenous Arts and artistic programs

Banff, Alberta, February 10, 2015 -- The Banff Centre is proud to announce it received a $1.075 million funding commitment from RBC to provide greater access for emerging artists to The Banff Centre’s arts programs with a primary focus on Indigenous Artists. As part of the RBC Emerging Artist Program, this five-year gift builds on a legacy of cultural value created by the relationship between RBC and The Banff Centre over the past three decades.

The funds will enhance opportunities for Indigenous writers, musicians and composers, dancers and choreographers, visual and new media artists to develop their talent as well as research, conceive, and produce work with cultural integrity and artistic merit.

“The arts play such a critical role in creating vibrant communities,” said Jeff Boyd, regional president, RBC. “Indigenous culture is so rich. The great thing about this program is, it offers training, mentorship and performance experiences so these artists can share their artistry with others.”

Under the direction of Sandra Laronde, Indigenous Arts programs at The Banff Centre have shaped the careers of internationally prestigious artists like Tanya Tagaq, winner of the 2014 Polaris Music Prize; LightningCloud, winner of the 2013 Aboriginal Peoples Choice Music Awards; and, Joseph Boyden, winner of the 2014 Canada Reads. In November, Banff Centre commission Tono by Red Sky Performance travelled to Shanghai to open as the featured Canadian company at the 2014 China Shanghai International Festival for the Arts by Red Sky Performance. Tono was commissioned and co-produced by The Banff Centre in celebration of its 75th Anniversary in 2008.

“With the support of RBC, we can continue to champion emerging artists and cultivate new artistic works that showcase the incredible diversity among First Nations, Inuit and Metis peoples. We can further develop programs that are of high artistic integrity while remaining rooted in diverse Aboriginal cultures,” added Laronde.

RBC’s support will also contribute to the entire suite of Banff Centre programs in 13 artistic disciplines, including artists’ access. This aspect of its support will be recognized as “Showcase Performances Sponsor” of the annual Banff Centre Midsummer Ball Weekend — our flagship fundraising event.

For more information about Indigenous Arts at The Banff Centre, please visit www.banffcentre.ca/indigenous-arts

About RBC: Royal Bank of Canada is Canada’s largest bank, and one of the largest banks in the world, based on market capitalization. We are one of North America’s leading diversified financial services companies, and provide personal and commercial banking, wealth management services, insurance, investor services and capital markets products and services on a global basis. We employ approximately 79,000 full- and part-time employees who serve more than 16 million personal, business, public sector and institutional clients through offices in Canada, the U.S. and 42 other countries. For more information, please visit rbc.com. RBC supports a broad range of community initiatives through donations, sponsorships and employee volunteer activities. In 2013, we contributed more than $104 million to causes worldwide, including donations and community investments of more than $69 million and $35 million in sponsorships. 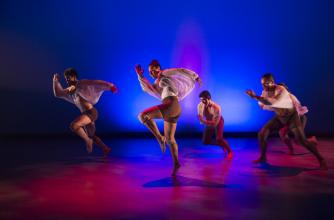 Acclaimed Indigenous faculty comes together with dancers from across Canada and around the world to share, investigate, and strengthen contemporary dance practice through culture, technique,...