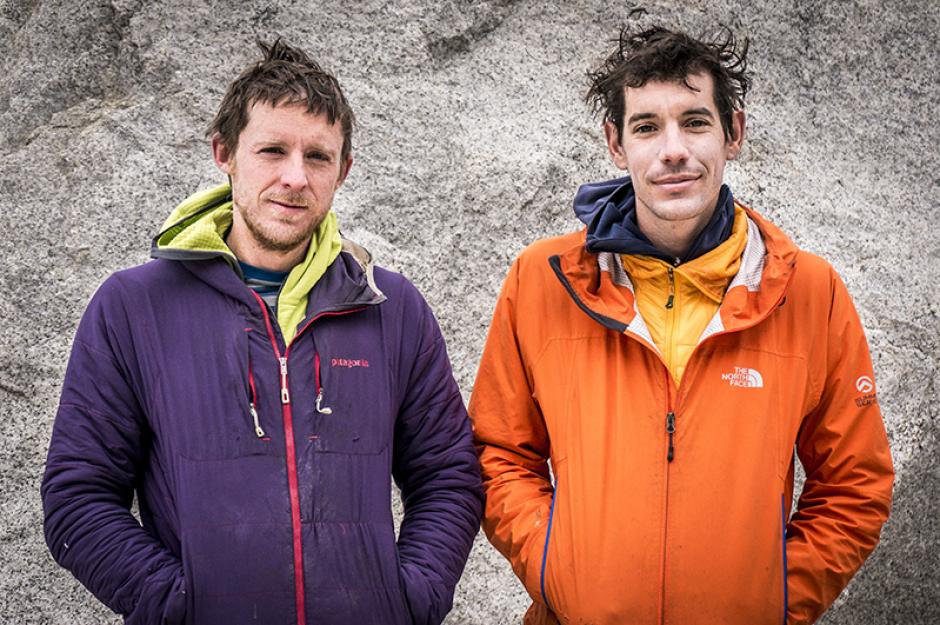 BANFF, AB, September 21, 2016 --  Both are known for their ascents of big walls, speed records and unflinching dedication to rock climbing. The Banff Mountain Film and Book Festival is proud to announce Alex Honnold and Tommy Caldwell as headline presenters for the 2015 Festival. Celebrating #40EpicYears, this year’s Banff Mountain Film and Book Festival showcases nine days of the best in mountain adventure films and books including the World Premiere of The Rockies Traverse, featuring paragliders Will Gadd and Gavin McClurg; the films Meru, A Line Across the Sky and Hadwin’s Judgement; in person appearances by Kit Deslauriers - the first person to ski the Seven Summits; alpinist writers Kelly Cordes and Simone Moro; and Lydia Bradey, the first woman to climb Mt Everest without supplementary oxygen. Climber and filmmaker Cedar Wright will also make his debut as emcee presenting the action-packed adrenaline show Radical Reels.

The Banff Mountain Film and Book Festival takes place from October 31 – November 8th, 2015 and presents the very best in mountain culture through film, photography and literature. The Festival, hosted by Banff Centre for Arts and Creativity, in Banff, Canada, presents over 75 films where audiences get the opportunity to meet, ask questions and learn from the world’s finest climbers, photographers, writers, explorers and more.

In the high-stakes game of big-wall climbing, the Shark’s Fin on Mount Meru in Northern India, has seen more failed attempts by elite climbing teams over the past 30 years than any other ascent in the Himalayas. In 2011, climbers Conrad Anker, Jimmy Chin and Renan Ozturk arrived in India to tackle Meru for a second time, under extraordinary circumstances. Winner of the audience award at the 2015 Sundance Film Festival, Meru is the story of friendship, sacrifice, hope and obsession.

Celebrating four decades of the most popular films, The Banff Mountain Film and Book Festival is showing eight Festival Flashback Screenings. Kicking off with the 1924 film Epic of Everest, expect a series of Festival favourites including Being Caribou, Alone Across Australia, Asiemut, Stranded and more.

Radical Reels has become more than just a night of awesome extreme sports, crazy athletes and mega-adrenaline feats on a massive screen. It’s an annual highlight, a Banff tradition that is full of wacky antics, outrageous stunts and high octane films – with climber and filmmaker Cedar Wright as emcee.

Based in Chamonix, France, Jonathan Griffith has climbed the world over and established himself as one of the world’s leading mountain sports photographers. He has completed many cutting-edge ascents to visually document expeditions in The Alps, Patagonia, Alaska and The Himalaya.   A highly accomplished alpinist, Griffith continues to push himself to capture what has never been shot before and published his first photography book, Alpine Exposures, in autumn 2014. His approach to photography has taken his climbing to a level that sees him regularly tie in with acclaimed climbers like Ueli Steck.

Who isn’t intrigued by Alex Honnold? The 30-year-old American superstar climbs in a way no one had ever imagined before he came along – without a partner, without a rope, on extremely difficult routes. In his revealing and nail-biting new memoir Alone on the Wall, Honnold teamed up with veteran climbing writer David Roberts to tell the stories behind his most mind-boggling climbs. For the North American book release of Alone on the Wall, Honnold is here in Banff to discuss some of his greatest expeditions - from free soloing two of the toughest routes in Yosemite in one day in 2007 to the Fitz Roy Traverse in 2014 with Tommy Caldwell. Honnold has built a remarkable career as a professional climber, consistently drawing the media’s attention for his audacious style and supposed fearlessness. Underneath his blasé demeanour andenigmatic ambition is a once in a generation visionary pushing the limits of climbing.

Hadwin’s Judgement is a feature film by Sasha Snow that recreates John Vaillant’s award winning book The Golden Spruce for the big screen. British Columbian logging engineer and survivalist Grant Hadwin takes on an emotional crusade to alert us all to the egregious devastation wrought by clear-cutting on the world’s last great temperate rainforest. His journey ends with a shocking, heart-breaking and illegal act. Vaillant and Snow are both returning to the Festival, the place where they first connected about the project at the 2006 Festival, to present the film.

In 2013, while climbing on Everest, Italian alpinist Simone Moro and his climbing companions Ueli Steck and Jonathan Griffith were attacked by a mob of Sherpas due to miscommunication and a high altitude dispute.  The “brawl on Everest” made headlines worldwide and Moro’s team was forced to descend, fearing for their lives.  The recipient of countless awards, Moro returns to the Banff stage for an intimate interview with climber, writer and psychologist Geoff Powter.

November 6 – Tommy Caldwell, followed by A Line Across the Sky

It’s been a big year for American climber Tommy Caldwell. First, along with Alex Honnold, he picked up a prestigious Piolet d’Or for the first traverse of the Fitz Roy massif – a seven-summit climb stretching four miles across an iconic skyline in
Patagonia, documented in A Line Across the Sky. Then, he and partner Kevin Jorgeson finally finished the first free climb on Yosemite’s notoriously difficult Dawn Wall, El Capitan’s steepest and toughest section with 32 pitches, 17 of them excruciatingly hard. After 10 years of planning and dreaming, five attempts and 19 days living on El Capitan this past winter, their feat – accomplished in the new era of live-coverage adventure – drew mainstream media to both the climbers and their route in an unprecedented way.

Caldwell’s presentation is followed by A Line Across the Sky, the hilarious new work from Sender Films about the traverse of the Fitz Roy massif which won Caldwell and Honnold the aforementioned Piolet d’Or.

In 1988, Lydia Bradey became the first woman in the world (and first New Zealander) to climb Mt Everest without supplementary oxygen.  It proved to be a controversial climb, caused by Bradey not having the correct permit. Fearing the Nepalese would ban them from Everest, her teammates denied her claim. Bradey struggled to recover from the harsh words of the media and her doubters.  Eventually vindicated, Bradey has since gone on to a very successful and prolific climbing career.  She joins us for the first time at the Banff Mountain Film and Book Festival for an on-stage conversation with celebrated Australian-born climber and award winning writer Greg Child.

“Five days. Four lost hikers. Three survivors.”  Every once in a while, a novel comes along so rich in adventure that it leaps from the shelves. Canadian writer Lori Lansens’ latest book, The Mountain Story follows one masterfully-imagined and troubled young man who is lost on the top of a mountain with three completely unprepared strangers. Lansens will be joined by acclaimed Canadian writer John Vaillant for an on stage conversation about process and the challenges of writing a wilderness narrative.  Vaillant is the author of the award winning book The Golden Spruce, The Tiger and most recently he published his first work of fiction, The Jaguar’s Children.

When American ski mountaineer Kit Deslauriers skied from the summit of Everest in 2006, she became the first person ever to ski from the Seven Summits. This raises many questions: How? Why? Was it legal? From sheer blue ice on Everest to corn snow in Australia, Kit shares the details of how she did it in her new memoir Higher Love - and how she pulled it all off in secret.

The Rockies Traverse details how two of the world’s finest adventurers, Will Gadd and Gavin McClurg, embark on 640 kilometre paragliding journey above the Canadian Rockies between the US and Canada. The pair were named National Geographic Adventurers of the Year in 2014 for their 35-day journey across rugged landscapes which is the longest air journey by a paraglider ever recorded.

Full film line-up and competition winners will be announced in October.

About the Banff Mountain Film and Book Festival: Created 40 years ago, the Banff Mountain Film and Book Festival has become the premier event of its kind in the world. The nine-day Festival hosted by Banff Centre showcases the world’s best films, books and photographs on mountain subjects – climbing, culture, environment and natural history, exploration and adventure, wildlife, and sport – and attracts the biggest names in mountaineering, adventure filmmaking, and extreme sports as presenters and speakers. An international jury will also award over $50,000 in prizes for films and books submitted to this year’s Festival competitions.

Banff Mountain Film and Book Festival Sponsors: The Banff Mountain Film and Book Festival is presented by National Geographic and The North Face, and sponsored by Deuter, Clif Bar, Bergans of Norway, Icebreaker, Banff and Lake Louise Tourism and Treksta, with support from PETZL, World Expeditions, Kicking Horse Coffee, The Lake Louise Ski Resort and Summer Gondola, Mammut, MEC, and the Alberta Foundation for the Arts.