The Full Light of Day

By
Jennifer McCartney
Posted on
October 03, 2018 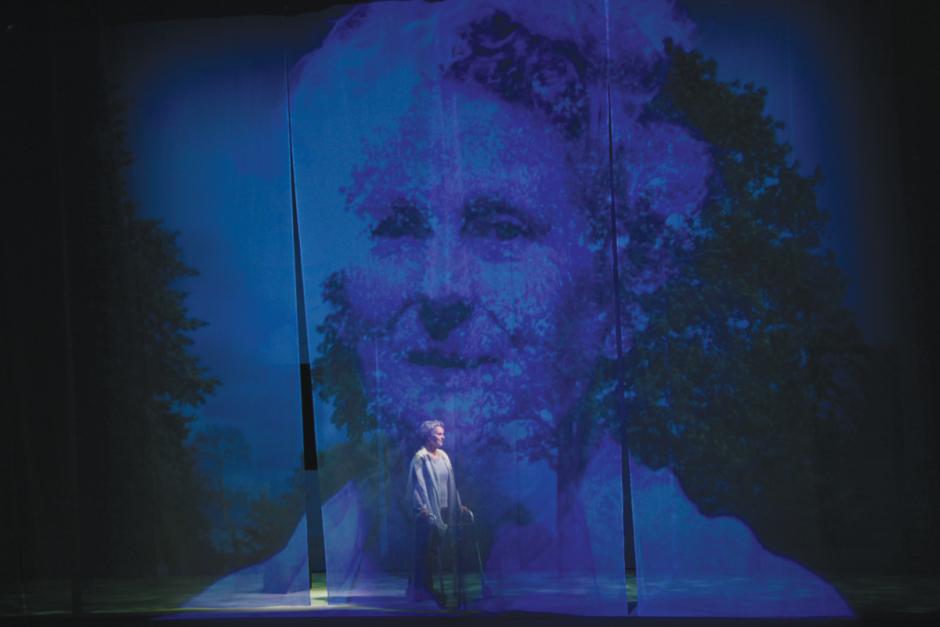 A performance about money, capitalism, and family; A hybrid of theatre and film; A technological feat. All of these elements come together as Electric Company Theatre’s newest production, The Full Light of Day, emerges from the shadows this winter for a production residency at Banff Centre before its premiere at the Vancouver Playhouse in January 2019 followed by a run at Toronto’s Luminato Festival in June.

The piece is certainly ambitious, but Naomi Campbell, deputy artistic director of the Luminato Festival is excited about what’s to come. “The combination of Kim Collier and Daniel Brooks is pretty exciting,” she says.

“They're both theatre directors at the top of their game.”

From film script to stage production

The Full Light of Day is, quite literally, a film adaptation—writer Daniel Brooks even created the script using screenwriting software. It’s described by director Kim Collier as a “modern tragedy,” and began as an adaption of Yasujirō Ozu’s 1953 masterpiece Tokyo Story (which was, in turn, based loosely on the 1937 American film Make Way for Tomorrow). But while the work was initially inspired by the cinema, it soon grew to encompass much, much more. “At the time, I was in Karnataka in India,” says Brooks, “and was reading a lot about the Mumbai mafia. So in the forest of Karnataka I let myself go, allowing myself to write freely, informed by Ozu, violence and corruption, and various stories from my own family history.” It was there a first draft emerged—the story of Mary, an aging matriarch of a wealthy Toronto family whose life is thrown into chaos when one of her children goes missing. It’s an exploration of greed, wealth, ambition, and capitalism—the Toronto housing market features heavily in the production.

“I wanted to write something that structurally encouraged a kind of experience for an audience that did not provoke outrage or righteousness, but a more tempered and less predictable, less rational response to complexity,” says Brooks, a prolific writer and director, and winner of the 2000 Capital Critics Circle Award and the 2001 Siminovitch Prize for excellence and innovation in Canadian theatre.

He coined the phrase plausible ambiguity, to describe the storytelling technique “in which much is omitted,” preferring obscurity and complexity over certainty. In an age of extremes, of moral outrage and indignation, Brooks is striving for nuance and understanding. He was guided in this quest by the novels of George Eliot, whose mission in her work is, as he understands it, “to expand her reader’s capacity for compassion,” notes Brooks. It’s a mission shared by Collier.

“What we need from our art is to keep building compassion and healing and collectivity moving towards the greater good,” she says.

The challenge, however, is to bring that film script, with all its nuance, to the stage. That’s where Collier comes in. “I asked Daniel if he would be open to bringing his emerging creation to the theatre,” says Collier. “I loved the story and I felt that what was at the core of the piece was very important and urgent,” she says. She also knew from previous experience that situations which initially seem impossible to stage can make for great theatre. “We thought of the writing as inspiration, as possibility, as movement,” Collier says. “Not final…but a place from which to dream.” And so, together, Collier and Brooks discussed what was and wasn’t possible. “Questions about locations, the number of characters, how we move from one scene to another—these practical questions have become increasingly pressing as we move towards production,” admits Brooks. 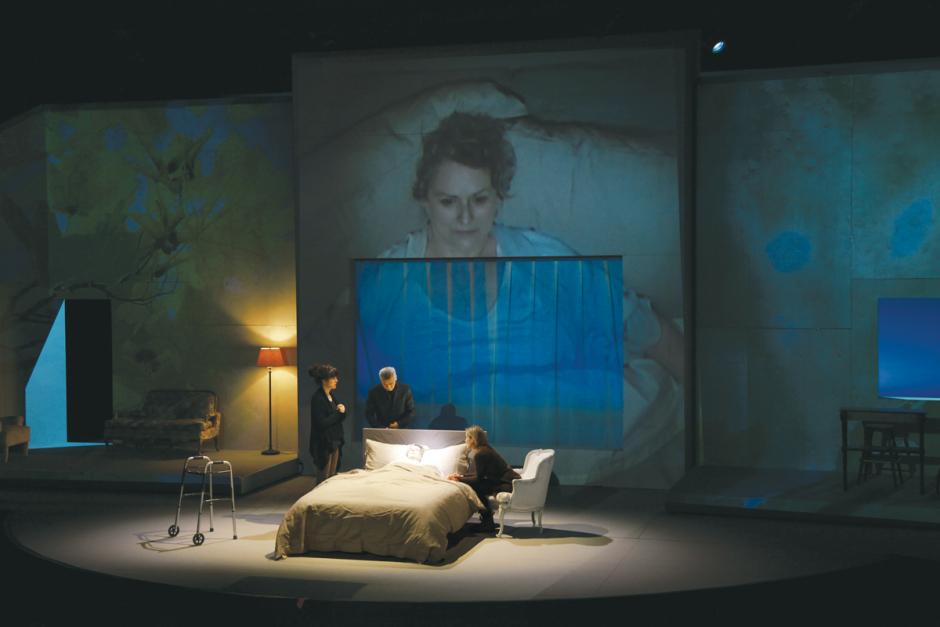 In late September, Electric Company Theatre will be participating in a three-week production residency at Banff Centre to workshop and prepare The Full Light of Day for its premiere, where they’ll be able to work some of those questions out. “It will allow us to test prototype ideas that have only been worked out on paper and see if they work,” says Collier. “It’s just not possible to bring to life a fully integrated production—ensuring the media, actors, staging, light, sound, composition, and set animations all work together seamlessly—without spending time together in the theatre,” she says. “We are so grateful to have Banff Centre as a producing partner for the work.”

Bringing The Full Light of Day to the stage will require Collier to draw on her previous experience directing challenging productions over the years. “From creating scenography for the stage through video projection (as we did with Studies in Motion) to working with live feed cameras (Brilliant, The Fall, No Exit), or working with filmed units that are created in pre-production (The Fall, Tear The Curtain, The Score, Riot)—it’s a beautiful and flexible toolkit I’ve acquired that will be utilized to best serve the story and the actors,” she says.

The production, billed as a film/theatre hybrid, will feature four short virtual reality films that serve as companion pieces to the stage play. Set designer Julie Fox has developed material scenography that allows the action to flow like a film, “landing us in one location after another,” says Collier.

A film and yet not a film. Theatre and yet not theatre. It’s genre-busting—one of Electric Company Theatre’s specialties.

A look back at a company that looks forward

Collier co-founded the Electric Company Theatre in 1996 along with Jonathon Young, David Hudgins, and Governor General’s Award-winning writer Kevin Kerr to “defy and expand the definition of what live theatre can be.” For Collier, that meant experimenting with technology in ways that hadn’t yet been explored in Canadian theatre—the company’s first production, Brilliant! The Blinding Enlightenment of Nikola Tesla, featured a “live” silent film, a glowing five-foot orb, and a choral production whose lyrics consisted solely of numbers. “Those [first] shows integrated technology in an increasingly organic way,” Campbell recalls. “It’s not like taking a separate script, like Hamlet, and deciding we want to do a contemporary version and all the ghosts are on film and Hamlet's madness is on video,” she says. “This is a step beyond that, when they knew from the methodology that they wanted to use [technology], that becomes a part of the vocabulary and that's a different thing.”

In other words, the tech was there from the beginning. Collier, the recipient of multiple awards including the 2009 Vancouver Mayor’s Arts Award and the 2010 Siminovitch Prize in Theatre, notes that people tend to have strong opinions about the use of technology in theatre. “Many, I think, feel it is a brutal thing to interrupt the live potential of theatre with tools that dominate our lives elsewhere: television, film, screens, phones, and computers.” A theatre patron, the thinking goes, perhaps wants an escape from technology rather than a production that engages with it—a perspective Collier says she understands. “But of course there are no absolutes and no right ways to do anything in the theatre,” she says. “Not all pieces want technology. I have no interest in technology separate from its ability to enhance or support the experience of content.” Ultimately, she says, a production must feel alive and undeniable and help us feel more connected in this world, regardless of whether or not it uses media.

“Even when the work was smaller, its aspiration was on a large scale,” says Campbell of the Electric Company's earlier years. “Even in their one-person shows, there has also been this tremendous ambition.” Perhaps it’s fitting that, 22 years after its founding, The Full Light of Day is the company’s largest and most ambitious project to date. “This massive project has literally taken a village of cooperation to achieve,” notes the company’s artistic producer, Clayton Baraniuk.

As the premiere approaches, Collier is focused on giving life to Brooks’ modern tragedy that originated as a film script so many months ago. “Art takes time,” says Collier. “The more time you have, the more you can refine what you want to say and do.” With The Full Light of Day, as with the company’s previous productions, the medium is part of the message. “We are surrounded by images and media. We use it to serve our desires and ambitions,” says Collier. “So of course, the stage is like us: part live, part mediated. It is who we are now.”