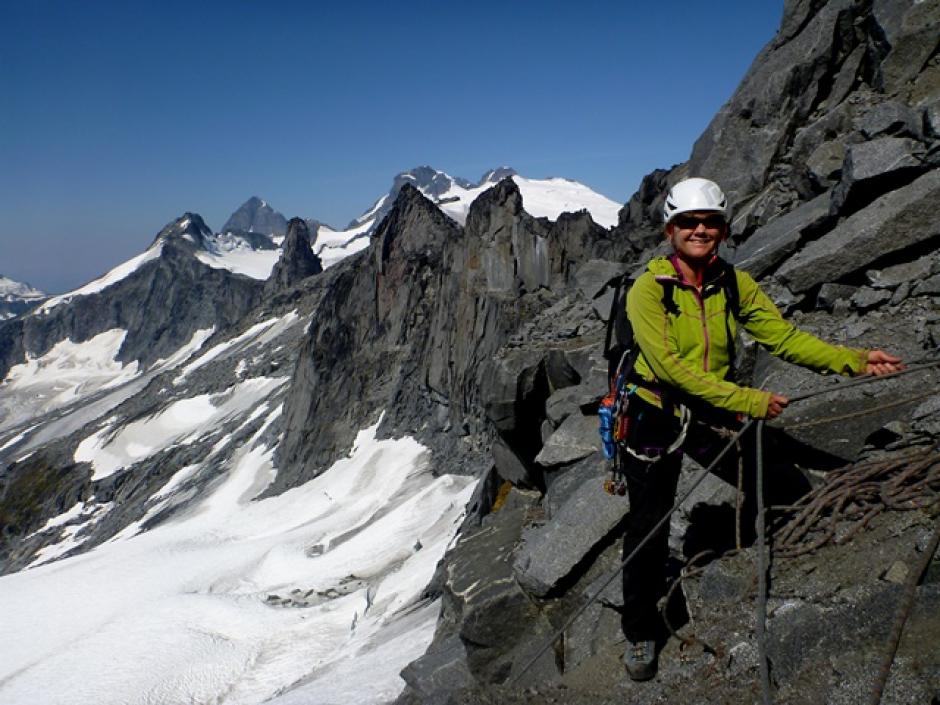 BANFF, AB, October 13, 2021 – Banff Centre Mountain Film and Book Festival is honoured to announce that one of Canada's outstanding mountain adventurers and guides, Helen Sovdat, is the recipient of the 2021 Summit of Excellence Award.

The Award celebrates long-term contributions, service, and demonstrated impact within the mountain culture community in Canada by an individual or group from across the country.

Helen Sovdat is an inspiration to women and to a new generation of guides everywhere. She prides herself on being both encouraging and inclusive. This has made her a much-loved friend and mentor of the mountain community.

Sovdat’s love of the mountains started with explorations from her home in Vancouver. Soon she was helping to pioneer several long ski traverses in the Coast Mountains. She later moved to the Rockies, beginning a long and accomplished guiding career. Sovdat has enjoyed sharing her passion with many people, helping them to develop skills, travel safely, and achieve their goals in the mountains.

She was the third woman in North America to earn full certification as an ACMG/IFMGA Mountain Guide. At a time when guiding was dominated by men, Sovdat was determined to show that women could be strong leaders if given the chance. She spent years exploring new and challenging terrain, with guests in tow, refining her guiding skills to a high level. This set her on a course to eventually becoming an instructor for the ACMG Training and Assessment Program.

Sovdat has put her guiding skillset to good use, leading expeditions in Canada and abroad, heading up Alpine Club of Canada General Mountaineering Camps, and working for more than three decades as a guide for CMH Heli-Skiing.

Since achieving her Mountain Guide accreditation, Sovdat has devoted time to creating opportunities for aspiring guides and leaders to accompany her on mountain trips and ski traverses so that they too can gain experience and learn through her mentorship. She feels that it is important to give back to the mountain community that helped her early in her career.

Sovdat has also proven herself in many of the world’s great ranges. From the St. Elias to the Andes, and the Himalayas, her climbing CV includes ascents of Ama Dablam, Manaslu (8156 m, first Canadian ascent), and Cho Oyu (8201 m, first Canadian women). In the Canadian Rockies, she has ascended all fifty-six 11,000-foot peaks — the ultimate alpinist’s tick list and something she achieved largely in her spare time.

The 2021 Summit of Excellence Award is sponsored by Norseman Outdoor Specialist and Mammut. The award will be presented during the Festival at the Voices of Adventure interview with Steve Swenson on Sunday, October 31, 2:30PM in the Jenny Belzberg theatre.

The Festival schedule is available online and passes and tickets can be purchased at banffmountainfestival.ca or Banff Centre Box Office (tickets for live in-person events in Banff from $15-$25 CAD).

If you’d like to provide media coverage of the 2021 Festival, please submit a media accreditation application form.

About Banff Centre Mountain Film and Book Festival: Created 46 years ago, Banff Centre Mountain Film and Book Festival has become the premier event of its kind in the world. The nine-day Festival hosted by Banff Centre for Arts and Creativity in Banff, Canada, showcases the world’s best films, books and photographs on mountain subjects – climbing, culture, environment and natural history, exploration and adventure, wildlife, and sport – and attracts the biggest names in mountaineering, adventure filmmaking, and explorers as presenters and speakers. International juries will also award over $40,000 in prizes for films and books submitted to this year’s Festival competitions. banffmountainfestival.ca