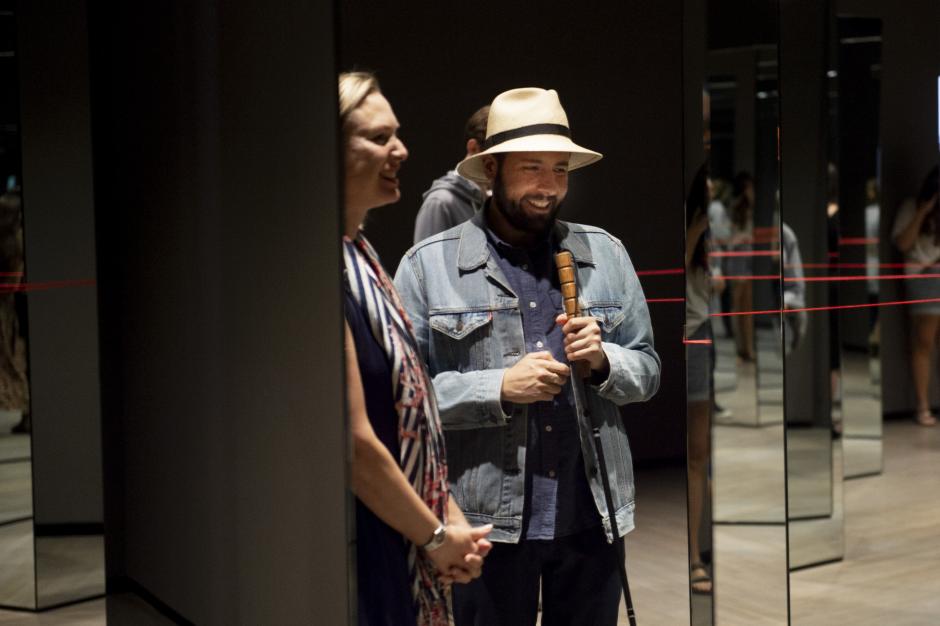 This article originally appeared in the S/S 2019 issue of InStudio magazine. Learn more and read the whole magazine here.

At the beginning of the recording, you hear a tapping—then clicks, the sound of an object's movement across pavement, and the ring of something metal being struck. With the introduction of a narrative voice, the volume on the track drops slightly. Still present, the background sounds can be followed in the moments between narration, inviting a subtle re-attunement to the peripatetic movement the audio suggests.

This sound work by Carmen Papalia is composed of a series of field recordings taken at Banff Centre in the winter of 2019. Holding a boom mike and small recorder, staff and practicums from the Centre’s audio department followed the Vancouver-based artist as he traversed the campus.

Trying our best to keep the sound of our clunky winter boots from becoming audible in the recording, we followed Papalia up frosty campus paths, through corridors, down stairwells, and into Walter Phillips Gallery, where his work will be presented as a part of the exhibition, Guidelines, with Vancouver-based artist Heather Kai Smith in the summer of 2019.

The field recordings of this walk produce an auditory experience that gestures to the tactile, and reflects Papalia's experience using a cane as a mobility device. As a non-visual learner, a term Papalia embraces over the medicalizing language of “blind” or “visually impaired,” his work considers the expanse of sensorial experiences that exist beyond sight, as well as leading conversations on how accessibility is defined.

His work considers the expanse of sensorial experiences that exist beyond sight.

In the work’s narration, we hear Papalia explain his experience as an artist: “I struggled with the fact that vision wasn't my central reference point. I held space for myself by resisting language like 'blind', when what I really wanted was a community that valued non-visual perception."

Papalia has committed to actively building this community through his practice. For example, in the performance work, Blind Field Shuttle (2012 - ongoing), the artist invites participants to form a line behind him, put their hands on the shoulders of the person in front of them, and to then close their eyes. The performance allows participants to experience the world through senses beyond vision, and has taken place in the streets of New York, San Francisco, and this summer, Banff.

The exhibition at Walter Phillips Gallery will also function as a physical space for this building and gathering of community, and a conceptual space for the continued articulation of a politics of de-centring the ocular in the field of visual art. The narration by Papalia in the audio work articulates the deep sociocultural implications of contemporary arts' privileging of the visual.

The work has the capacity to transform cultural institutions.

"I didn't realize the full impact of ocularcentrism until I told my friends who identify as blind about my work. Many of them had never been to a museum, let alone considered pursuing art practice,” he says in the recording. “The contemporary art landscape wasn't organized so people like them could represent themselves or share their stories with the wider public. Instead, the entire field privileged visuality; a tradition that not only repressed unseen bodies of knowledge, but excluded non-visual culture with its own history from participating."

With implications both within and beyond the field of contemporary art, the work proposes a methodology for access that has the capacity to not only transform cultural institutions, but to change how access is understood more broadly within Canadian culture at large.

Please join us for the opening of Guidelines, an exhibition by Carmen Papalia with Heather Kai Smith.