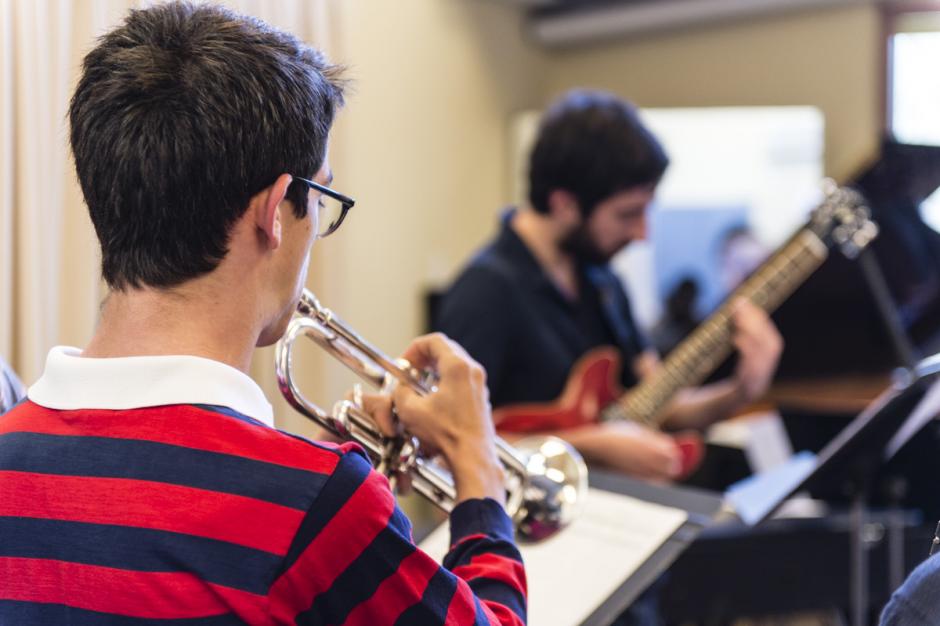 The birth of jazz was in New Orleans at the beginning of the 20th century, but its roots can be found in both European and African styles of music. Although mainly popular in the United States at that time, jazz has since branched out across the world, adopting a variety of different sounds and styles.

The Banff International Workshop in Jazz and Creative Music brought artists from all over the world to collaborate on different styles of jazz. Five artists in the workshop tell us how jazz inspired them in their home countries.

It wasn’t until Harry Coulson moved from Canberra to Melbourne that he found what he describes as a “pretty healthy jazz scene.” Growing up in Australia’s capital Harry said the jazz community was pretty hidden. He had first heard of jazz on an old BBC radio program called The Goon Show.

“The blues aspect of jazz, though, is what I think I really enjoy and Charlie Parker was really close to that. Just his way of hitting the notes is just going hammer and tongs for it.”

Although Harry says there are plenty of Australian jazz guitarists who have inspired him, one in particular is Adelaide-based guitarist, James Muller.

“He’s incredibly good and incredibly quick. All the notes go past in such a blur you don’t catch it. Only now am I able to think quickly enough to keep up with what he’s doing.”

Harry says one of the best experiences he’s had with a jazz community was coming to Banff.

“Every night our shows were packed and everyone seemed to be really into the music. I didn’t want to go home.”

Mauricio Dawid’s first experience with jazz was when his dad came home one day with a Louis Armstrong CD. Ever since then he was hooked.

Mauricio started off playing rock music on his bass guitar, but slowly switched over to jazz music in his late teens. Mauricio started listening to North American jazz but soon checked out what Argentina had to offer.

“There’s a mixture of jazz with our own music, like tango. There are a lot of groups who play tango jazz or traditional folk music combined with some jazz elements,” he says.

Mauricio says he does look for inspiration from both continents, but he also says it isn’t the bassist's job to be creative.

“As a bassist I try to set the tone, so instead of trying to be creative with the instrument I have to keep the pace.”

Like many musical European households, Benjamin grew up listening to classical music. It was when his family started to play some American jazz records that Benjamin became drawn to the style.

Benjamin started to play the viola at a young age and learned mainly through classical music. When he was a bit older he picked up the electric bass and started to experiment with other styles of music. First funk and rock, and then jazz.

Benjamin says the jazz scene in Europe is quite different compared to North America's. He says European jazz musicians can be a little more creative with their music.

“In the big cities in Europe, especially Berlin, you have very interesting active jazz scenes. Traditionally they approached jazz a little differently than North America. It’s usually more towards the side of self-expression as opposed to what the roots of jazz are.”

Eventually Benjamin incorporated the viola into jazz. Because it's a traditionally classical instrument, Benjamin says he tries to emulate the sound of horn instruments like trumpets and saxophones to get a more authentic jazz sound.

“When I started playing the viola it was really important to me to also learn the tradition of jazz while playing. Not just the modern, experimental side of it. Although that’s also something I’m pretty into nowadays.”

He says to categorize jazz as an American style of music is unfair because it borrows sounds and styles from so many other types of music.

“To just see jazz as an American style doesn’t really hit the core of the music because jazz, even at the very origin of what it was, was a fusion of different cultures. Jazz’ biggest influences in the beginning were European classical music and African music.”

Trish Clowes says her earliest memory of jazz is her dad bringing home an Ella Fitzgerald CD at Christmas, and that she couldn’t stop singing it for three days.

“At the time I didn’t think of it as jazz, I just liked singing it.”

Trish grew up in the countryside of England. She says she was lucky because her father played in a big band so she had a steady appreciation of jazz from an early age. At that time she began playing saxophone and started to think seriously about her future as a musician.

Trish was then accepted to study jazz at the Royal Academy of Music, but she still continued to write her own music.

“My personal view is that I love jazz. I love listening to it, I love learning from it. But when I play I’m using my skills as an improviser. I bring my own sound to jazz.”

Trish says there’s a lot of freedom playing jazz in the U.K. as there aren't as many political, social and historical issues with jazz like there are in the U.S.

“In the U.K., because we have always known that it’s not a music that has come out of our own country, we come to it with a different perspective right from the start. We don’t think about the roots, really, because you know where it comes from. Maybe that makes us freer sometimes with the way that we explore the music.”

Since saxophone is such a staple of jazz, Trish says that playing it is a little like a blessing and a curse. Since so much has already been done with the saxophone, Trish tries to bring her own style to the instrument.

“I like to play on the fringes of jazz, and boundaries of it. I think of myself as an improviser. I don’t think ‘Oh I’m a jazz musician.’ That’s part of what I do but it isn’t who I am.”

Andrej Hocevar started playing classical guitar at an early age but got his first taste of jazz while he was at school.

“It was the live energy that I didn’t get in classical music, which was very inviting.”

Andrej saw jazz as an all-encompassing style of music. One that was, at its core, very historical but allowed more room for creativity than classical music did.

“[Jazz] was an environment that I could actually engage with my personal views and create new situations daily,” he says.

Andrej soon switched from the guitar to drums because he wanted a more challenging instrument. He said the physical component of the drums is unlike any other instrument because it forces you to use your entire body. He says that component of the instrument goes well with the style and pace of jazz.

“The physical ranges of the electric guitar are very limited. With drums you can do things that are in range of dancers basically. One can engage on a level with the complete existence of the body. The complete possibilities that arise from our motions can be translated into sound.”

Andrej says he doesn’t consider himself to be solely a jazz musician. He says he is drawn to the style of jazz because of its capacity for creativity.

“The problem with the word itself and the definition of jazz is that music is universal. There are specificities and every place has its own sound. But music comes out of human beings that live lives.”

Andrej says it’s important to recognize the history of jazz but also to recognize unique expressions within the music as well.

“I am inspired by the artists that create the foundation for us to continue their developments. I think those artists always took the position where they personalized their own existence. Such as: I’m not playing jazz, I’m playing my own music, which you may call something else but I know that’s my own expression.”