Meet One of the Greatest Mountaineers of All Time 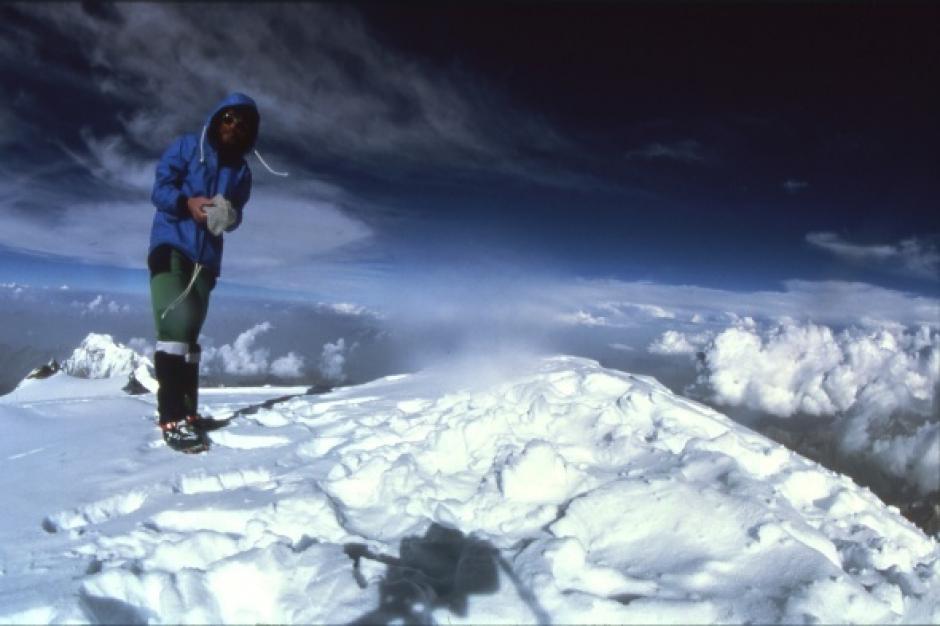 If you Google his name, the search engine takes only seconds to bring up more than two-million hits.

Reinhold Messner is the most famous mountaineer of all time.

On September 27, I was there for the European premiere of the film Messner, which brings to the screen an impressing multilayer portrait of the 67-year-old South Tyrolean. After seeing it the first time I made a point of arriving here in Banff for the first day of the Banff Mountain Film and Book Festival in time to see the film again.

The conversation below is taken from after the European film release, where Messner spoke with me about anarchy and obsession, a theological seminary he attended in Brixen, and his greatest alpine achievement.

I remember hearing in the film a song line that goes “I am obsessed by my visions.” Is this the story of your life?

This title expresses quite exactly what and who I am. Yes, I am obsessed by my visions. These could be climbing tours, the eight-thousanders, museums, or book projects. This is how I have been living, and how I still do.

As a boy, you felt imprisoned by the narrowness of the valley of Villnöss. How is living in South Tyrol today?

As a boy, I suffered this narrowness. And I don’t mean the geographical narrowness so much, but mainly the psychological narrowness in the valley. It has left its mark on me. But after close to 100 expeditions and 200 trips around the world, I don’t feel imprisoned in the least. I feel absolutely free to go wherever I’m driven. Besides, I’m not living in Vilnöss anymore, you see. In the summer, living in Juval Castle, you can experience absolute vastness. The valley’s narrowness isn’t palpable on the hill.

In your childhood you used to spend the summer in the Alps with your family. Up there, as you say, anarchy was reigning. Is anarchy still reigning on Juval castle, too?

(Laughs) My children up there find a kind of anarchic condition, if you like. This is true particularly for my youngest daughter. On Juval she enjoys much more liberty compared to Merano, where we live during winter and where she has to get up early and go to school. I myself feel anarchistic only when I’m on my way outside the boundaries of the civilized world. Through my museum activity and the dedication to my foundation, I’m tied in pretty tight and democracy stays. I accept that. As a democrat, I obey, as far as possible, all the rules, even if some of them really make me wonder.

But when I leave civilization, set about to climb the Eiger North Face or cross the Gobi Desert, as I did, I experience pure anarchy. I do what is necessary to survive. The anarchic way of life does exist — only short term, and only out in the wilderness.

As a boy you did a climbing tour in the Geisler Group. You value this ascent as the greatest and most important alpine experience of your life.

I was five years old, standing on Sass Rigais. In my personal estimation, this summit is the greatest of my life. The relation between me, the little green tyke, and this three-thousander was overwhelming. It is all about commensurability. Today a climb of medium difficulty in the Dolomites is a great affair for me, though in my best years I would climb such a face just like that in an afternoon, on my own.

You attended the theological seminary in Dorf Tirol. Was young Reinhold Messner about to become a priest by any chance?

(Laughs) No, there were different reasons. In the '50s in South Tyrol, the children of the village had no chance of attending secondary school. Only the cities of Bolzano and Merano had a grammar school. In order to attend it, one would have needed to afford a room to stay in the city. But there were three theological seminars. The children of Vilnöss were sent to Dorf Tirol, the children of the Puster Valley to Brixen, and the children from the Upper Vinschgau to the Benedictine monastery of Marienberg.

We were not there to become priests, but had to complete the religious apprenticeship all the same.

You say in the film that as a 20-year-old you were out for adventures to such an extent that you couldn’t talk about it to anyone, because you would have been met with utter incomprehension. For many years now, you are revealing much about yourself, and meeting great interest. How is that?

You must have mistaken me there. What we did at the age between 18 and 20 was extreme alpinism. The year I took my diploma I climbed the most difficult routes of the Alps, which led to the first tensions with German mountain climbers, who simply couldn’t understand how a 21-year-old could master Point Walker on the Grandes Joresses. So just imagine I should have explained to my friends or my family, what we were doing! They simply hadn’t a clue. We were living in our own world. All my close personal environment knew was that Günther and I were into serious climbing. But we all know this is a broad notion.

Nowadays I like talking about it. However, not even once in my life have I been on a stage without being asked to. I try telling my stories in a way that laymen can understand – but if they really do, that I doubt. If somebody had asked me then, they would have received an answer.

As a woman, I simply have to ask you: why do only your brothers have their say in the film?

My sister appears in the film in a very beautiful sequence, in my view. Director Andreas Nickel has chosen a touching moment for her, depositing flowers at the commemorative plaque for Günther. I guess my sister would have made me appear like a hero, and of that I would not have approved at all. I’m categorically against the heroic ideal in mountain climbing.

Are there mountain climbers at present to whose achievements you tip your hat?

There are many I appreciate. If I’m supposed to give the absolute highlights at this point, I would mention the American Steve House and the Slovenian Marko Prezelj. I will also be following closely Denis Urubko. Someone like Ueli Steck, a very sympathetic and cultured fellow, after his ascent of Everest on usual routes, however, has to prove that he wants to do real alpinism, not only speed climbing.

There are still are a lot of good alpinists. But today they have a hard time even to be noticed by the media. Because all those charlatans, fixed-route alpinists, and the so-called skyrunners absorb a lot of media attention, and the media reporting is off the mark. I don’t want to talk about competitive athletes in this context. Climbing on plastic holds is a separate, brilliant discipline, but it has nothing to do with alpinism.

Is it still possible to find real alpine adventures?

Fortunately, it is again. Recently I went with my son on a well-known, classic route in the Dolomites, with a face height of 600 metres. In the past, for decades such a route counted about 60 ascents a year. This year, we were the second rope team on this face. That means nobody’s going anymore on classic routes. Climbing gardens and halls are the real hype now. Everyone’s going there.

The possibility of living an adventure, exposing yourself to great difficulties, being on your own, today is possible more than ever. Ralf Dujmovits recently captured on camera a queue of over 300 climbers in tailback on the Lhotse Face. Finally we have excellent photographic proof that what I have been denouncing for 20 years is a reality. I have been criticized for it, but it’s even worse than I had pictured. If everyone goes there, there will be no more real adventures on Everest.

Do you consider it an adventure to set off for Baffin Island as the Huber brothers, Ines Papert or Hansjörg Auer, are currently doing?

Yes, surely it’s an adventure, though this has presently become a — to be put within quotation marks, please — “fashionable area.” Good climbers nowadays go there by default. But the real quests are to be found in the Himalayas.

In this context I’d like to mention Stefan Glowacz, a climber much to my liking of late. He recently attempted to summit Gauri Shankar, a seven-thousander. He arrived on-site and realized he was dealing with an entirely different dimension there. I know this situation; I have failed to succeed on some really great faces myself. You’re standing at the foot of the face and tell yourself “This is completely insane! This is crazy!” Nevertheless, you tackle it; succeed to climb maybe 1,000 metres, but then naked fear drives you back down, because we alpinists have a strong instinct of self preservation, too.

In the film you say that after the loss of your brother, you felt twice as strong. Can you clarify more?

I adopted his passion and his energy. But that is my very personal interpretation. My energy was at its highest in the years preceding Nanga Parbat. I was in top form regarding strength, technique, ability, climbing skills. I partly lost that due to the loss of my toes. But the pure energy and enthusiasm, my will, and my ideas developed and became manifest only after Nanga Parbat.

I have taken the strength, the energy and perseverance from Günther and lived them out acting for both of us. But, as I said, this is my entirely personal interpretation.

In the film your former wife Uschi is being mentioned, with whom you were married from 1972 to 1977. Why doesn’t she have her say in the film?

She appears in a film clip, but didn’t want to comment, I can understand that. I also heard first allegations from the press, along the lines of why only my graduate brothers have their say in the film. I have to reply that all my brothers are university graduates. There is only one living Messner brother without a degree. That’s me.

In the film we learn that you would have liked to attempt an eight-thousander together with a female climber. Was this a serious intention of yours?

Absolutely. But at the time I didn’t find a lady with whom I could have realized that project. I was indeed well acquainted with Wanda Rutkiewicz, but she wasn’t up to climb a difficult face in alpine style to summit an eight-thousander. And only for the sake of realizing my project I did not want to compromise and take normal routes instead.

Would it have needed someone like Gerlinde Kaltenbrunner at that time?

Yes, this woman is excellent, in terms of condition and endurance. Gerlinde Kaltenbrunner is absolutely tops.

Johanna Stoeckl is a freelance journalist from Munich, Germany, who writes frequently on outdoor adventure sport, mountaineering, and travel for European magazines and newspapers. A proud Austrian and avid skier, Johanna is covering the Banff Mountain Film and Book Festival for the first time, contributing to Alpine magazine, Bergauf, the official publication of the Austrian Alpine Club, and several major daily newspapers. She has attended screenings of The Banff Mountain Film Festival World Tour in Munich for more than a decade. 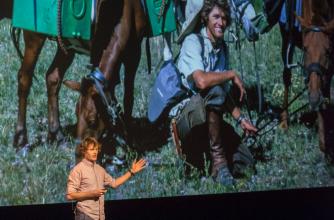 He Followed Genghis Khan's Trail 10,000km on Horseback for the Love of Adventure

Australian filmmaker, author and outdoor guide Tim Cope is no stranger to adventure. His most recent work, On the Trail of Genghis Khan, chronicles his 10,000 km solo journey through Mongolia all the...
Read More