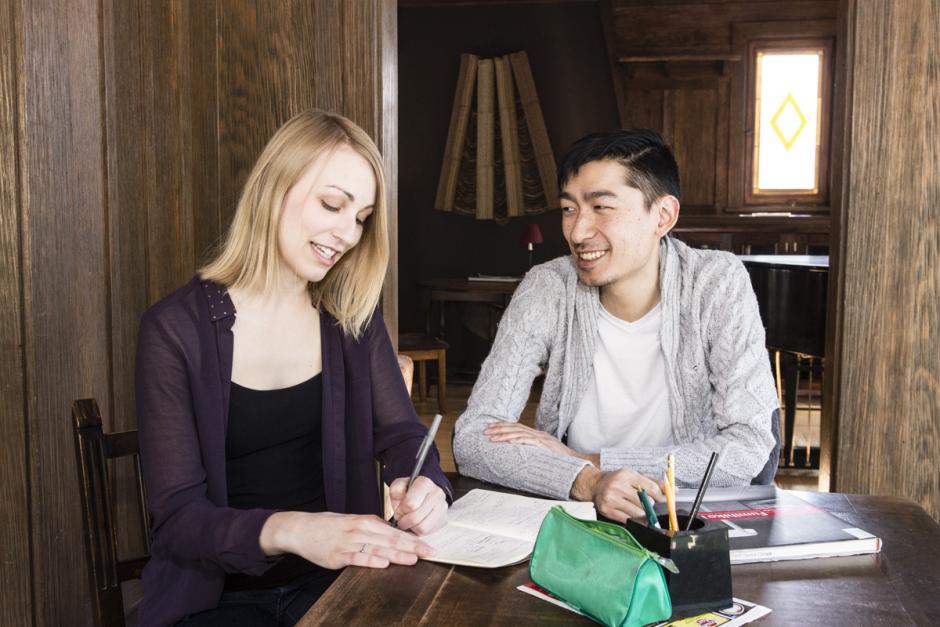 Chelsea Woolley and Gary Mok, the National Theatre School participants for the 2016 Playwrights Colony, work in the Painter House.

The following is the first of a handful of blogs from members and faculty from the 2016 Playwrights Lab. This first edition comes from one of our two National Theatre School playwrights, who came to Banff before his last year of study.

How do you build skyscrapers on quicksand?

Writing a play feels like building a skyscraper on quicksand sometimes. Please indulge me in this stumbling metaphor built – you know it – on quicksand. When I’m writing a play, I find myself mostly just doubting the play. Am I building a beautiful story on a shoddy foundation? Or is the story itself hollow and infested with those ants that penetrate the structural integrity of a building?

It’s hard to tell with a play sometimes.

It’s hard to know with a play most of the time.

And it’s hard not to get lost in your head while you’re writing in Banff, asking questions of varying importance. That’s what happens when you’re surrounded by beautiful scenery and even more beautiful artists. Artists from all walks of life, each armed with exciting projects and existential questions that probe at all the parts of my curiosity. Why do we tell stories? How do we make a living? Should we tell our children which one of them is our favourite?

The Lab’s playwright-in-residence Marcus Youssef asked me that last question when I brought up the project I was working on over dinner one night. It remains a theoretical question to me. I can only dream of being a father and, truthfully, sometimes I dream of being a playwright.

There’s something incredibly magical about being surrounded by a bunch of playwrights. Playwriting is usually the most solitary of occupations in the theatre. Some playwrights devise and collaborate creatively, but I’m used to creating by myself.

I used to think I thrived in the solitary, but now? I’m not so sure.

When I had a bad writing day in Banff, Josh Languedoc reassured me that it was okay, that the day wasn’t wasted. When I hid in my hotel room working for most of my last day, no one judged me. The Banff Playwrights Lab was a space where I could be honest and vulnerable. Everyone’s been there, done that, drank coffee, written bad drafts, drank more coffee, had an existential crisis, drank more coffee, cried to someone or no one, and then kept telling important stories. It’s truly a special place to be for art and for life. And for coffee.

As I enter my final year at the National Theatre School of Canada, I’m going to appreciate the magical environment I have there even more. We have six playwriting students at the school at any given time, and I’ve only just realized how much the time we spend together matter to me. We build each other up and challenge each other. We’re heavily invested in each other’s successes, and we’re even more heavily invested in each other’s failures. We’re there for each other, in art and in life.

When I asked the mountain how to write a play, it didn’t respond.

The mountain doesn’t know either.

Gary Mok is a playwright studying at the National Theatre School of Canada. He maintains a web presence at www.garymok.com where he does not blog. His plays are his blogs.