Banff, Alberta, November 20, 2011 -- One of the most critically acclaimed jazz musicians of the new century, pianist, composer, and bandleader Vijay Iyer has been appointed director of the Banff International Workshop in Jazz and Creative Music at The Banff Centre. Iyer will be at the 2012 Workshop (May 21 to June 9), and will officially take over the role in 2013.

“We are delighted to have such an exceptional musician take over the helm of the jazz program,” says Sarah Iley, vice president of programming at The Banff Centre. “It was important to find someone who could build on the inspired directorship of New York-based trumpeter and composer Dave Douglas, who has led the program for the past ten years. Dave, in turn, followed such legendary musicians as Dave Holland, Phil Nimmons and Oscar Peterson, all of whom helped shape The Banff Centre’s jazz program into the internationally renowned program it is today. We are confident that Vijay Iyer will make his own mark on the Banff International Workshop in Jazz and Creative Music.”

On his appointment Vijay writes, "I am thrilled to accept the position of director for Banff's program in Jazz and Creative Music. I have long admired the program, the most prestigious workshop of its kind.  Among the program’s many strengths are its top-notch faculty and students, its intensive nature, and its decades-long influence on the worldwide network of creative musicians. I will strive to live up to this legacy as the program's new director, and I will work hard to maintain its high quality and sustain its impact on the vanguard of the field."

Dave Douglas comments, "I have felt great honor and gratitude to direct this program for ten years, and it is with excitement and anticipation that I pass the torch to Vijay Iyer. Vijay is a dedicated musician and thinker, and his strengths will guide the program in new and rewarding directions. Music continues to grow and change, and it is wonderful to know that this incredible program will also grow and change. After visiting universities, workshops, and seminars around the globe, I can say that the workshop at The Banff Centre is among the most intensely focused musical experiences available for young musicians. Spending three weeks in Banff with 65 of one's most gifted peers changes lives.”

Vijay Iyer’s 2009 Grammy-nominated album Historicity was named top jazz album of the year by the Village Voice, National Public Radio, and the New York Times, among many others. In 2010 he was named Jazz Musician of the Year by the Jazz Journalists Association, and this year he released Tirtha, a collaboration with guitarist and composer Prasanna and tabla player Nitin Mitta. Originally from Rochester, New York, Iyer’s music ranges between classic American jazz, inventive and improvisational original composition, and traditional South Asian influences. With 13 albums in ten years, Iyer’s compositions have referenced jazz and popular music greats including Thelonious Monk, Leonard Bernstein, and Duke Ellington, and he’s collaborated extensively with musicians including saxophonists Rudresh Mahanthappa and Steve Coleman, poet-performer Mike Ladd, and electronica composer and musician Talvin Singh. Iyer is active as an educator and holds a doctorate in music perception and cognition.

Jazz programming at The Banff Centre has provided one of the most important training grounds in the world for improvising jazz musicians and composers. It began in 1974, when jazz legends Oscar Peterson and Phil Nimmons came to Banff to put their ideas on jazz education into practice. For a few weeks each summer, the International Workshop has brought leading performers and composers together with younger emerging artists in an intense program of master classes, ensemble playing, discussion, and experimentation (past mentors have included Chucho Valdes, the Bad Plus, Joshua Redman, and Bill Frisell). Musicians in the International Workshop also perform regularly as part of the Banff Summer Arts Festival.

About The Banff Centre: The Banff Centre’s mission is inspiring creativity. Thousands of artists, leaders and researchers from across Canada and around the world participate in programs here every year. Through its multi-disciplinary programming, The Banff Centre provides them with the support they need to create, to develop solutions, and to make the impossible possible. 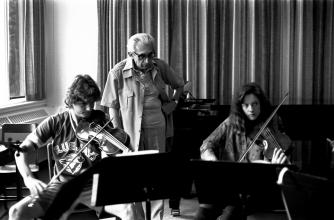 Eight decades of music-making in the Canadian Rockies.
Read More