Reverbs and Reconciliation: A Conversation with A Tribe Called Red’s Bear Witness 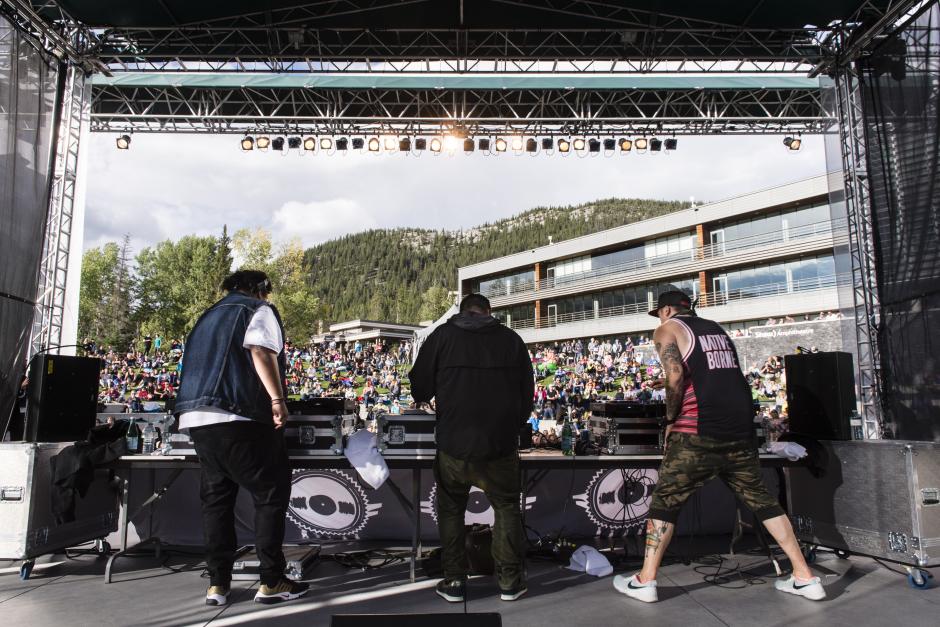 There is always evolution in revolution, and A Tribe Called Red (ATCR) is testament to that. The internationally-acclaimed DJ group made up of Bear Witness (Cayuga), Ian “DJ NDN” Campeau (Nippising First Nation), and the most recent addition Tim “2oolman” Hill (Mohawk First Nations) rose to prominence in Ottawa after Bear Witness + DJ NDN and created club nights aimed at the urban Indigenous crowd dubbed “Electric Pow Wow.”

When they first started in 2008, the pair simply played sets of hip-hop and dubstep to mostly Native crowds, but in 2008 when they added Dan “DJ Shub” General (Mohawk from Six Nations) to the mix, the then-trio created an entirely new genre of music dubbed “powwow-step” which attracted attention from the mainstream music industry.

Both their first self-titled album and Nation II Nation received Polaris Music Prize nominations in 2013 and 2014 respectively. In 2014 the group won a Juno Award for Breakthrough Group of the Year where they were the first ever Aboriginal group to win an award outside of the Indigenous music category. During the acceptance speech DJ NDN made a special shout out to Native youth, urging them to chase their goals and “aim high,” as the group was proof that anything is possible.

Shortly after that big win, the group shifted again as DJ Shub exited for personal reasons and 2oolman came on board. This set the stage for a new creative process as they geared up from making club bangers to creating an entire concept album, We Are The Halluci Nation, released fall 2016, which features artists Tanya Tagaq, Lido Pimentia, Yasiin Bey (formerly Mos Def), Saul Williams, and Shad, to name a few.

I caught up with Bear Witness over the phone while he was at home in Ottawa on a rare tour hiatus to catch up on all things Tribe.

LC: So I'm just wondering where you feel the band is right now — how have you evolved from when you started?

Bear Witness: It's changed a lot. This album was a three-year journey. In the beginning of production, I was trying to write a storyline for it. We started off talking about us as a band of superheroes who were going off to find other allies, then that story evolved to us being bandits. but once John Trudell gave us the Halluci Nation poem, it was like, 'okay!' now we have this idea of a nation that we can invite people to be a part of.

Was it one member that led the vision along the journey, or was it collective?

We collectively decided to do it. I took on a lot of the writing part of it and was inspired by John’s poem and used a lot of ideas I had around Indigenous science fiction to fill in the gaps and flesh it out a bit. But the way that the album itself gets to tell the story is largely due to our new member, 2oolMan. He has a different style of working and was able to pick up the challenge of creating this concept album, have a story-arc through the music, and also work with all these different people and include their collaborative elements. If you want to talk about evolution, taking that step of collaboration was so huge, and something we all learned a lot from and grew a lot from. 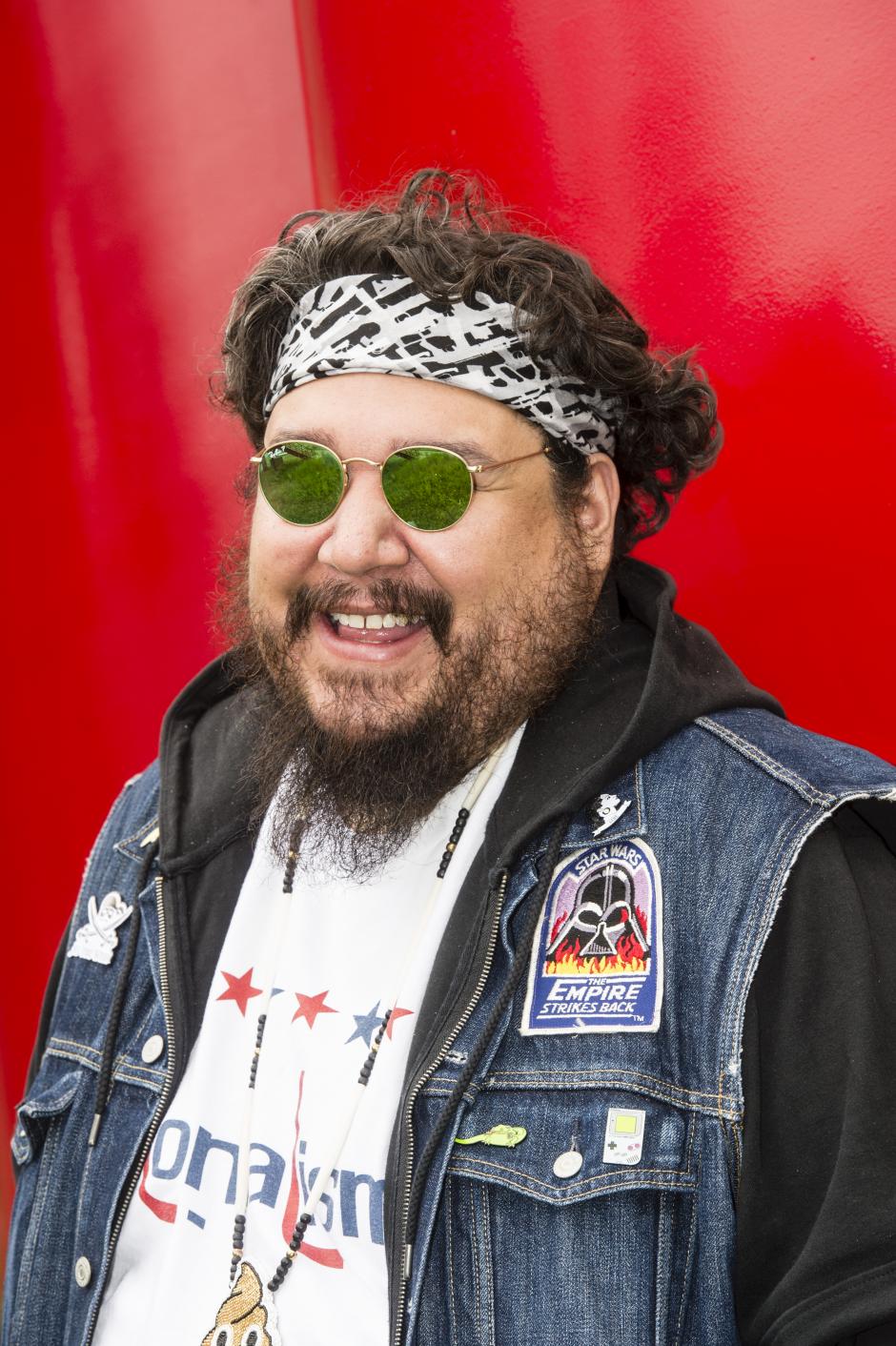 Tribe's been great about introducing Indigenous music to the mainstream. How has the acceptance changed since you started touring as a trio back in 2010?

We've always had an abundance of talent within the Indigenous community, but we've largely only been talking to ourselves because people outside of the community weren't willing to listen. But there's been this massive shift in the last decade in Canada. You see it with the Polaris with both Tanya [Tagaq - Inuk throat singer] and Buffy [Sainte-Marie] winning Polaris Music Prizes, and us winning a Juno outside of the Indigenous category.

These are massive changes in the way that people are seeing the culture, and are willing to interact with the culture...in a way that doesn't seem so voyeuristic as in the past. We’re actually getting to exercise our voices. The fact that Indigenous artists can be outspoken about the things they care about and remain successful – now that's really different.

We’ve got these celebrations of culture — not just within our own people — but with everybody celebrating. For me, this feels like a part of moving forward, and a part of reconciliation. Within the changing landscape in Canada, and all this talk about reconciliation, do you feel like you're a part of that?

I have mixed feelings about the idea of reconciliation, in the way it’s being used and played out in Canada, particularly. It's one of those things I feel does a lot more for the colonialists than it does for Indigenous people.

So you don't feel a personal connection to the concept as it stands now?

I don't really have a personal connection … but the overall idea of reconciliation is really difficult. There’s a lot of work to be done before we can even start that conversation.

Do you feel like A Tribe Called Red can be a part of that conversation?

I think A Tribe Called Red is a part of trying to begin the conversation that would bring us to a place where we can start talking about reconciliation. One thing I’ve noticed is how Indigenous people and non-Indigenous people come to our shows and experience the same thing at our shows, together. That's the common ground. That's a common experience that's being created here in Canada.

Trying to find common ground to even begin having a conversation about Indigenous issues – which attack the heart of the colonial construct — is one of the hardest things to do between Indigenous people and settlers. What we've been able to do with Tribe is to begin to give people the opportunity to have a shared experience. That can lead to better understanding of each other, that will then lead us to a place to have a critical conversation, to help put things in order in this continent.

So what’s the next big goal for Tribe?

I always find that such a hard question because we're constantly blowing our own minds in terms of how far this is going to go, or how it's going to grow, or what's going to be possible next. We're always being told by the people around us to dream bigger because we have a hard time seeing how far this can go. Every time we seem to dream up something bigger than we did last time, it happens. I mean, we got a track with Yasiin Bey [“R.E.D.”]. So, we’ve just got to keep challenging ourselves to grow more and see where this is going to take us.

This interview has been edited and condensed. Lisa Charleyboy (Tsilhqot’in – Raven Clan) is a First Nations writer and social entrepreneur living in Toronto. She is the Editor-In-Chief of Urban Native Magazine, which focuses on pop culture with an Indigenous twist. This article originally appeared in the inaugural issue of Banff Centre's InStudio magazine. Pick one up on campus today.