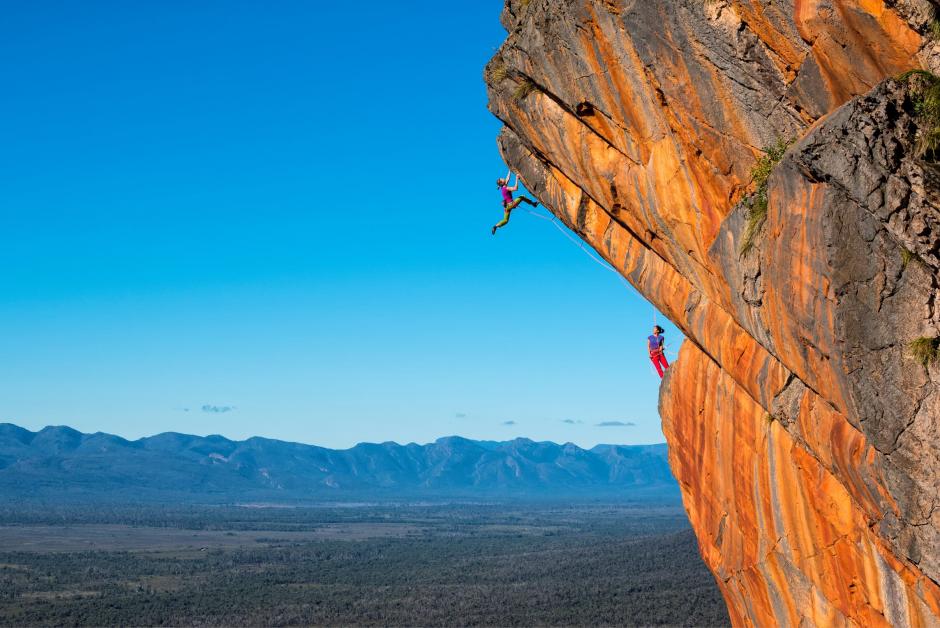 The 47th annual Festival and World Tour will be represented by Simon Carter’s image of Ashlee Hendy and Elizabeth Chong in Grampians (Gariwerd) National Park, Australia.

The annual Banff Centre Mountain Film and Book Festival signature image represents the best in mountain adventure photography from around the world. Every year we encourage photographers to submit their best images and we receive a broad range of inspiring and epic photos. We then narrow down our selection to choose one image to be featured in all our media for the Festival in Banff and around the world in over 45 countries on the Banff Centre Mountain Film Festival World Tour.

Once again this year, we received a diverse selection of images – and our final batch included some fabulous images ranging from ice climbing in the Rockies, stunning ridge views from alpinists in Europe, trail running in South America, mountain biking with dramatic peaks, and so much more!

The image that ultimately rose to the top for us this year was this dramatic image of two climbers in Australia. In 2021, our signature image was of the solitary basecamp at night in Denali National Park, which we felt at the time evoked a “sense of hope and direction during the strange and difficult pandemic year.” And now, in 2022 and on the heels of the pandemic, this image resonated with our team as both adventurous and joyful, with the blue sky, two relaxed-looking climbers supporting each other, and the solid gorgeous red rock.

Photographer Simon Carter says he first became aware of the climb in this image in 2015. Following the sold-out success of his 2013 edition of the Grampians Climbing guidebook that he publishes, Carter was working on a new and expanded edition in 2015 with author Neil Monteith. They were attempting to cover most of the major climbing areas in the Grampians National Park – an 80km long mountain range in western Victoria, Australia. Says Carter, “Neil had sent me the material for one new crag that had just recently been established, called Clean Cuts. This beautiful orange crag had only really come to the attention of rock climbers after massive bushfires had swept through the area in 2013.”

Of this specific climbing route on the crag, named The Man Who Sold the World, says Carter, “The photogenic potential was obvious. It’s a two pitch route, beginning with grade 23 (5.11c) and the second pitch, which tackles the roof, is grade 25 (5.12b) – and the opportunity to get both the climber and belayer on the skyline was clear.” Carter knew that photos would have to wait until he could spend more time in the area and climb a neighbouring route to determine the best angles, including how to get some of the trees out of the foreground. Says Carter, “The other major consideration was the lighting, and I knew the only time of year that you’d be able to get light in under the roof would be mid-winter, so that both climbers could be well lit, rather than in silhouette – so I filed the concept away in my brain, along with many other ‘routes I must shoot one day.’”

Carter says it wasn’t until quite a few years later that it all came together and he was able to get back to the area and give it a try. “Ashlee Hendy and Elizabeth Chong were in the area, we saw a weather window and went for it.” Carter did the 13-hour drive from his home in the Blue Mountains to the Grampians, hiked up to the crag the next morning, climbed part way up a route, fixed his rope, and checked the angles, and went for the shoot the following day. “It was clear, cold and windy but Ashlee and Elizabeth were both totally at home on the route. The wind made communication hard but they just naturally pulled off that one other element that was required to make it all work – namely perfect body positions.” In a nutshell, he says,  “So we got the shot. A cliché maybe, but I’m not sure why I’d want it any other way.”

Simon Carter Biography
Simon Carter, born in Canberra, Australia, is a professional outdoors photographer recognised internationally for his distinctive rock climbing photography. He was named by Men’s Journal Magazine (USA) as one of the World’s Best Adventure Photographers and described by the editor of Rock and Ice Magazine (USA) as “arguably the greatest climbing photographer of all time”. He first became fascinated with photography and climbing as a teenager. He built his first darkroom in the family bathroom when he was 15, then at age 17 he discovered rock climbing and has been avidly pursuing the activity ever since.

Carter studied photography at high school and subsequently got his first job working in a photography department at the Australian National University. The work involved producing images for scientific research, most of the time sitting in a tiny darkroom printing images of DNA gel smears and seemingly abstract images that the scientists had taken through electron microscopes. After sticking the work out for two years, and studying photography at night school as well, he became disillusioned by the path he was on, realizing it would not lead to the kind of photography that inspired him. So in 1987 he quit his job and went rock climbing in the south of France for two months. After that his interest in the outdoors and climbing took over for several years. He completed a Bachelor of Arts in Outdoor Education at La Trobe University in 1990. Later Carter spent an eight-month stint of full-time climbing in 1992/1993, mostly at Mount Arapiles and the Grampians. During this time Simon started photographing his friends’ climbing achievements, his love for photography was reignited, and he decided to pursue it in earnest.

Carter  began working as a professional photographer, and established Onsight Photography and Publishing in 1994. Since then he has travelled widely for his photography and built up an extensive body of work encompassing many of world’s best climbing destinations — from Tsaranoro in Madagascar and Teplicke in the Czech Republic to Mount Huashan in China — as well as every major cliff in Australia.

He’s the author of four coffee-table books: Rock Climbing in Australia, World Climbing: Images from the Edge, World Climbing: Rock Odyssey and Rock Climbing Down Under: Australia Exposed. His awards include the King Albert Medal of Merit for Achievements in the Mountain World (2000), the Rick White Memorial Medal for Services to and Achievements in Australian climbing (2009), and the Camera Extreme Laureate awarded by the Explorer’s Festival Poland (2010).

These days Carter balances photography and film projects with publishing guidebooks to some of Australia’s most significant climbing areas, including The Blue Mountains, Sydney, Nowra, SE Queensland, The Grampians and Mt Arapiles, plus a guidebook to the Red River Gorge in Kentucky, USA. He lives in the Blue Mountains near Sydney and still climbs on a regular basis.

Find out more about the Signature Image Challenge.

So we got the shot. A cliché maybe, but I’m not sure why I’d want it any other way. 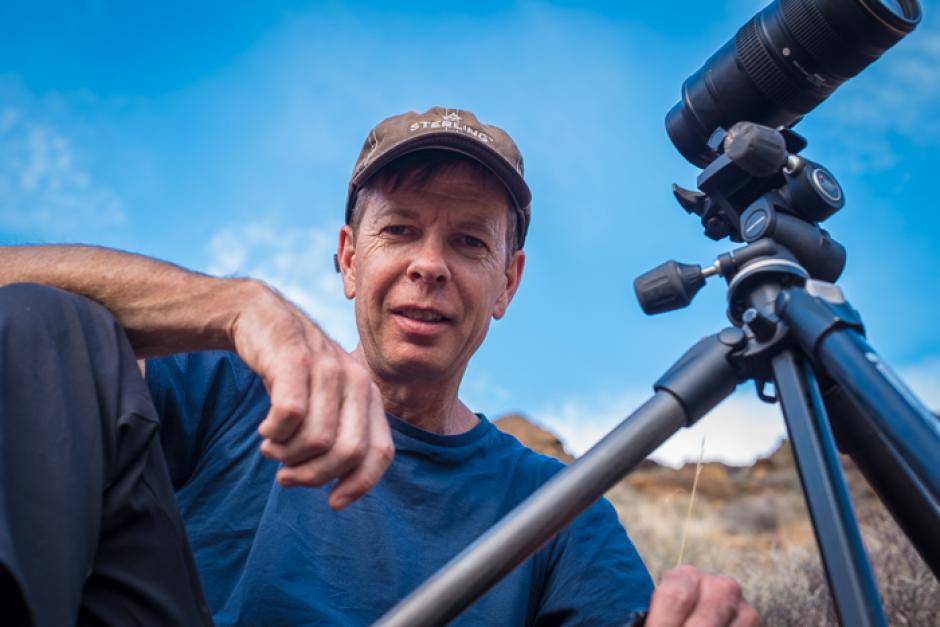 Here's a sample of a 2022 Festival advertisement with Simon Carter's image: 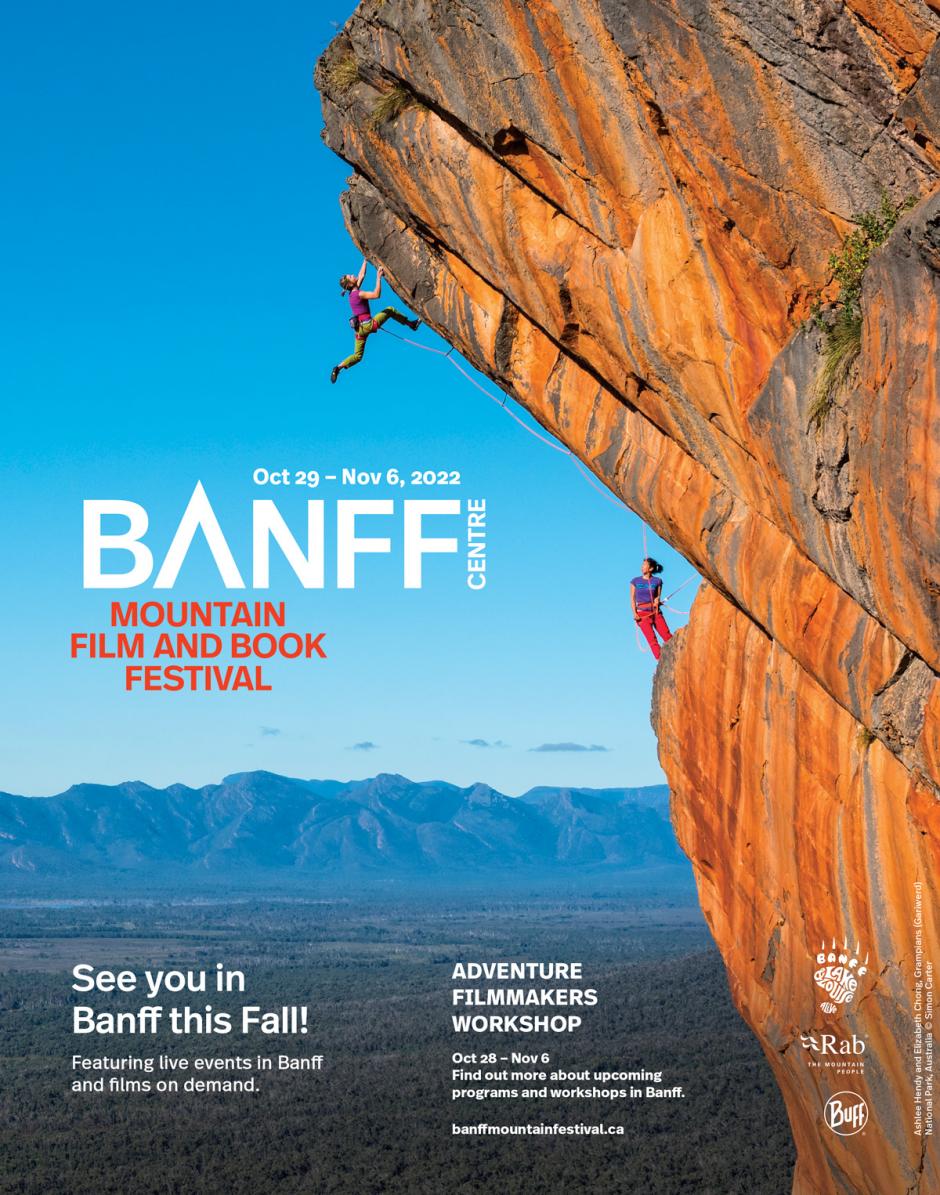 We are excited to share updates and news surrounding the 47th annual 2022 Banff Centre Mountain Film and Book Festival and World Tour in the coming months as well as updates on our Adventure Filmmakers Workshop, Film/Book/Photo Competitions, and more!

Make sure you subscribe to our newsletter lists so you don't miss out!
You can customize which emails you'd like to receive.