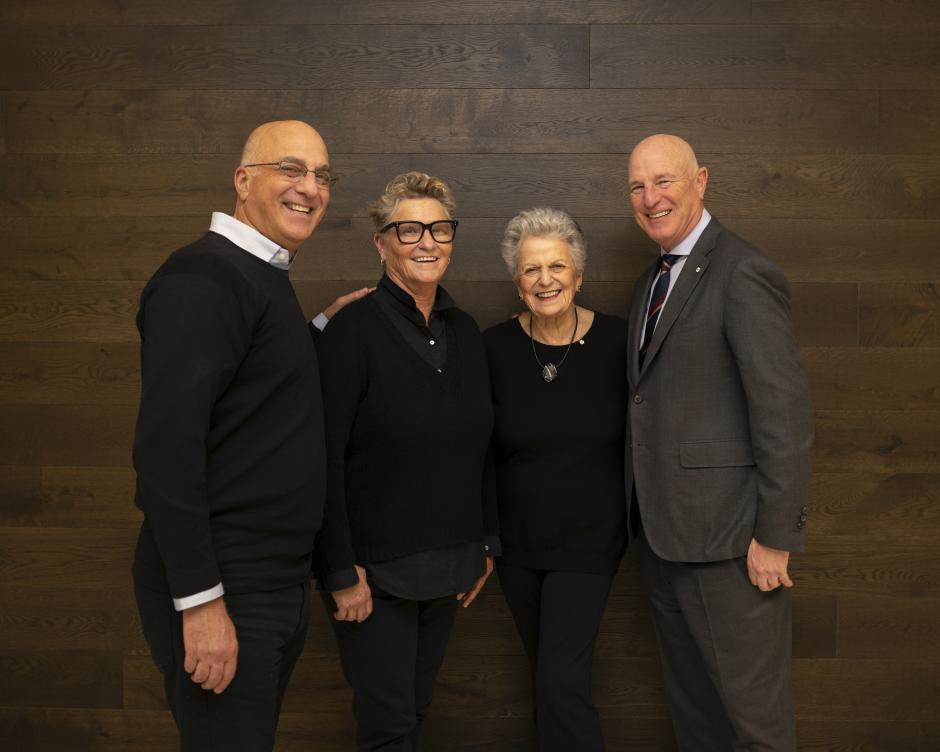 BANFF, AB, May 31, 2019 – Thanks to a transformational gift from the Belzberg children in honour of Calgary-born community builder and philanthropist, Mrs. Jenny Belzberg CM, AOE, LLD, Banff Centre’s most important training and performing arts venue will undergo a major revitalization. The renewal of the 52-year-old Eric Harvie Theatre will improve audience experience, and ensure that Banff Centre is able to meet the needs of artists who use it for education, creation, and presentation of their work.

A dedicated, lifelong community volunteer, Mrs. Belzberg has deeply influenced the cultural life of Alberta as a former board member of the Calgary Philharmonic Society, founding member and board chair of the Esther Honens Calgary International Piano Competition, and board chair of Banff Centre for Arts and Creativity (1987-1991). She co-founded the Lieutenant Governor of Alberta Arts Awards in her kitchen with Fil Fraser, the late Tommy Banks, and the late John Poole. Mrs. Belzberg was appointed a Member of the Order of Canada in 1996 and the Alberta Order of Excellence in 2000.

At the heart of Mrs. Belzberg’s gift — one of the largest private gifts Banff Centre has ever received — is pride in Alberta and a deep appreciation for Banff Centre’s vital role as Canada’s largest postgraduate arts school.

“Banff Centre is an international organization, so it helps everyone, and I want to see more of that. There’s something magical about this place,” said Mrs. Belzberg. “Banff Centre is in my heart.”

Opened in 1967 and named in honour of one of Alberta’s most important business leaders who was also a passionate arts and culture champion, the Eric Harvie Theatre has served as the preeminent performing arts venue in Canada’s first national park for 52 years.

Some of the country’s most acclaimed productions were created and staged in the theatre, including award-winning productions:

The theatre is also home to the Banff Centre Mountain Film and Book Festival and the Banff International String Quartet Competition, which collectively host an audience of 30,500.

“This is spectacular news for the Bow Valley, Alberta, and Canada,” said Janice Price, President and CEO of Banff Centre. “The theatre has served us all well as one of Canada’s premiere performing arts educational facilities and the region’s preeminent performing arts venue. This generous gift from the Belzberg children in honour of Mrs. Belzberg will modernize the space, and improve the connection between artists and audiences.”

Changes to the existing theatre will revitalize the capacity of the facility, and include:

The revitalization project was awarded in February 2019 to the team of KPMB Architects (Toronto) and MtA (Calgary) as the result of an extensive and thorough Request for Proposal (RFP) competition. The process began in late fall of 2018.  Proposals were received from 19 applicants representing a broad cross-section of regional, national, and international firms.

“Revitalizing this cultural gem in the heart of Banff National Park is an honour. We want to ensure that the Jenny Belzberg Theatre meets the modern needs of audiences in terms of accessibility, comfort, improved sightlines, and above all, beauty – to inspire both actor and audience,” said Marianne McKenna, Partner at KPMB Architects, whose impressive portfolio includes renovations to Koerner Hall  and Toronto’s Royal Conservatory TELUS Centre for Performance and Learning, renovations to Massey Hall and to Orchestra Hall in Minneapolis, and The Brearley School in New York City.

Situated on Treaty 7 territory in Banff National Park, Banff Centre is Canada’s largest postgraduate arts and leadership training school, and attracts nearly 4,000 artists and leaders from Alberta, Canada, and around the world to its campus in the beautiful Canadian Rockies every year to learn and create new works of art. More than 75,000 artists have trained, created, or performed at Banff Centre since 1933.