Time-Lapse: What This Artist Created in Seven Hours

As an illustrator, storyteller, film director and exploratory rock climber, Jeremy Collins' repertoire is vast. This time-lapse art creation was recorded at Banff Centre in one seven-hour sitting, then condensed into four minutes.

The short film merges active art creation with imagination and animation and was created for the premiere of Drawn at the 2014 Banff Mountain Film and Book Festival with support from Banff Centre’s Fleck Fellowship program and Clif Bar.

Blending stunning footage with sketchbook art and animated scenes, Drawn takes audiences with Collins as he explores remote villages, makes new friends, and says goodbye to an old one. “The story is not really about climbing,” he said during his time at Banff Centre. “It’s about relationships – my family back home and friends – and celebrating those relationships in a special way.”

Looking back on the experience of climbing the jungles of Venezuela, to the China-Mongolian Border, to the northern reaches of Canada, and closer to home in Yosemite Valley, Collins acknowledges that this time in his life led to the biggest transition he has had as an artist.

“I became a storyteller instead of just a picture-maker,” he says. “I love writing. I love making art with ink and watercolour. I love storytelling more than any of that though. Telling stories – whether my own or someone else’s – that’s my calling in life.

“My hope, like every artist, is to entertain, to make their lives richer and give them an experience that’s memorable, and to empower them to go and tell their own stories.” 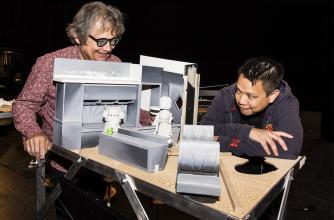