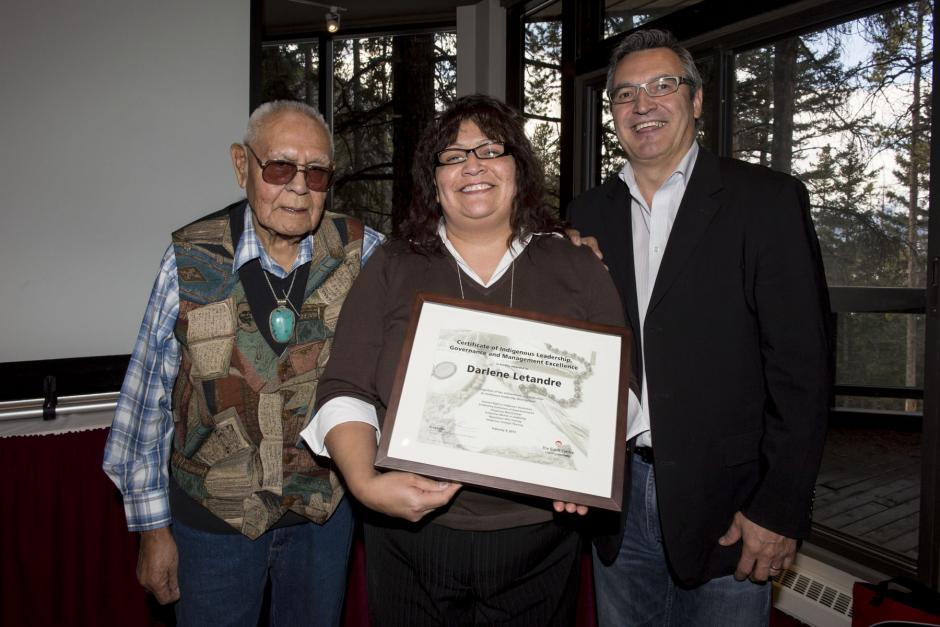 She speaks with a soft-spoken gentleness, but underneath you can hear her determined passion. As she stands before a group of fellow program participants and their friends and families (including her husband and grandson), Darlene Letandre begins to tell us the powerful story of her learning journey.

It’s the closing lunch for the Inherent Right to Indigenous Governance program. Program director Brian Calliou congratulates program attendees on their desire to “think big, invest in your future, keep dreaming of sovereignty, exercise local control, and maintain a ‘do it’ attitude.” He challenges each one to “turn ideas into action,” and in the case of Letandre, Calliou’s challenge has more than been met.

Letandre was honoured for two reasons at the conclusion of the program: first, she received support to attend through the first annual Indigenous Woman’s Achievement in Community Leadership scholarship. The scholarship, supported by anonymous donors, fully covered tuition, room, and board for the program. She was also presented with her Certificate of Indigenous Leadership, Governance, and Management Excellence. Along with four others, the certificate is awarded to those who have successfully completed a total of six programs with Indigenous Leadership and Management at The Banff Centre.

Letandre’s story is a case study in how leadership development programs tangibly impact participants. She comes from the Pinaymootang First Nation, located in and around Fairford, Manitoba, about two-and-a-half hours northwest of Winnipeg. The nation is isolated from major centres, at the junction of two rivers. With Gypsum Lake to the northeast, and Lake St. Martin to the southeast, the area was an important early trade and travel route with the remains of a Hudson’s Bay trading post still evident.

Her band population consists of around 2,800 people, and it is here in a community where no woman had been a band councillor for more than 30 years that Letandre takes up an important idea and turns it into action.

Letandre’s first program at The Banff Centre was Indigenous Women in Leadership. At the time, she said, “I had no intention of becoming a leader.” But in the program she was inspired by faculty leader Cora Voyageur. “She is an inspirational person who taught me about confidence, having strength as a woman, and being resilient in accomplishing goals. My goal became to run for a position as councillor within my community, using the vocabulary and learning gained through the program.”

The last time a woman was elected into leadership in the Pinaymootang First Nation was in the early ‘70s, and that woman was also a Letandre. “I decided I was going to be the next one,” she said. While she didn’t get elected that first time around, “I was okay with that. I wanted to get a feel for how the community felt about me.”

Her next program was Negotiation Skills Training, with Don McIntyre as lead faculty. Letandre used her skills in that program “to negotiate with my employer to come to the next program, Indigenous Strategic Planning.”

Her confidence grew with each program, and this past year, she decided to take another run at leadership. This time, she was successful. “Everything I learned here at The Banff Centre I applied again to my nomination speech, my campaign, and I got in! Four hundred and forty-four people had faith in me.”

Since election, Letandre is quietly but firmly making her presence felt in her community and feels she is already making a difference. “With what I’ve learned here and the understanding that I have, I’ve started to change the way our leaders think in our community. As opposed to only talking about the past, now I say to them ‘what can we do to move forward?’ As a woman in leadership and a natural caregiver for the community, I’ve become a balance within the council of men to fully see the social and economic issues and their effects on the community by bringing a different perspective to change and growth.”

Letandre has already set her next goal, which she revealed with excitement as she ended her story. To a rousing round of applause and cheers she announced: “My next goal in my life is to become the first woman Chief of my First Nation of Pinaymootang.”

Letandre knows this may be her biggest challenge yet. “There is a lot of resistance to change, and our community still has a long way to go, but I am assured through my learning in these Indigenous Leadership and Management programs, along with our own community’s experiential learning, we will become a strong and independent nation. I’m very determined as a leader to assist in the chaos of change.”

Letandre already knows how she’ll celebrate. “When I become Chief, I will play the drum that I made in Don McIntyre’s Strategic Planning program, and embrace the chaos that’s about to happen!”