A Brief History of Visual Arts 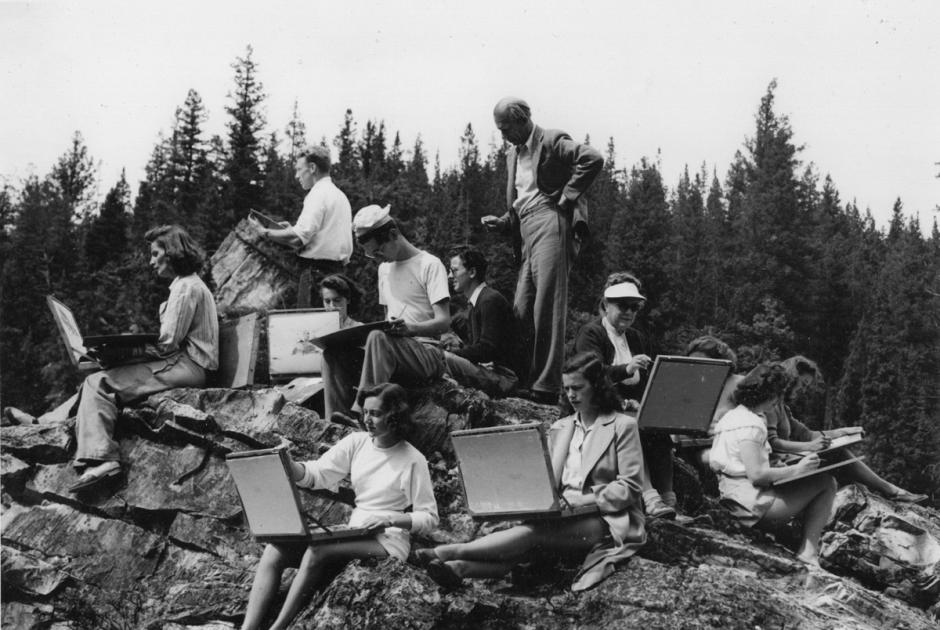 Banff Centre for Arts and Creativity has been training artists since 1933 in the Canadian Rockies. It has offered Visual Arts programs since 1935, when painter A.C. Leighton held outdoor painting class that summer. Within five years, Visual Arts programs were established and led by painters H.G. Glyde and Walter J. Phillips, both teaching for decades at the nascent Banff School of Fine Arts; their painting classes evolved from dozens of students to hundreds over their tenure, creating a strong foundation for the legacy of visual arts training at Banff Centre.

Over the decades Banff Centre has continued to introduce innovative and vital visual arts and multi-media programs and residencies that support emerging and leading visual artists from across Canada and around the world. Visual, Digital and Media Arts programs offer 24/7 access for established and emerging artists, as well as providing technical, material, and conceptual support in a way that no other cultural institution in Canada can. From ceramic firing kilns to 3D printers, from studio-space to our permanent collection of campus-wide public art, Banff Centre provides a haven for visual artists when they need to renew their creative spirit.

To view a selection of highlights from the history of Visual Arts at Banff Centre please scroll down to the dateline.

1935: Alfred Crocker “A.C.” Leighton moves his outdoor painting class to Banff Centre and connects to the Theatre Arts program – this was the beginning of the Banff School of Fine Arts and its multidisciplinary programs. Leighton was integral in developing the painting program at the Institute of Technology and Art, which evolved into The Alberta College of Art and Design. He also founded the Alberta Society of Artists and served as its first president.

1936: Henry George “H.G.” Glyde is appointed director of the painting program and would teach courses for more than 30 years. One of the students is Roloff Beny, a photographer and artist who gained international acclaim and became a protégé of Peggy Guggenheim.

1941: An applied arts and handicraft program is established, with courses in handweaving and design led by Mary Meigs Atwater, Head of the American Shuttlecraft Guild; instruction in modeling and pottery taught by J.B. McLellan from the Glasgow School of Art.

1944: The Canadian Armed Forces sends 25 airwomen to Banff Centre to train in its handicraft course.

1953: Nature photographer M.V. Crich teaches photography at Banff Centre and continues to serve as faculty until 1973. Crich Hall on campus was named in his honor.

1973: Banff Centre alumnus Takao Tanabe is appointed head of the painting division, following his return to Canada from New York, where he established a successful career as a visual artist.

1979: A fire destroys Crich Hall, which housed office and artists’ studios along with photo negatives. Many negatives were saved after the fire and Banff Centre staff spent countless hours washing and drying the negatives, a series of which were presented in April 1980 in an exhibition titled Jury by Fire.

1980: Tanabe retires from Banff Centre and continues to visit the campus for many years. He is succeeded by sculptor Terence Johnson, who was educated at the Nova Scotia College of Art and Design. Wilma Needham, a former student of Tanabe’s, becomes the program’s teaching assistant, and develops into an established educator and artist.

1991: Visual artist Janet Cardiff creates her innovative piece Forest Walk at Banff Centre. This is the first of what became an internationally regarded series of audio walks created by Cardiff.

1991: Anishinaabe interdisciplinary artist Rebecca Belmore creates her iconic work Speaking To Their Mother at Banff Centre. It goes on to tour across Canada and then returns to Banff Centre as part of the permanent public art collection on display in the Kinnear Centre for Creativity and Innovation.

2010: Alberta-based visual artist Mark Clintberg installs Meet me in the woods. This public artwork was commissioned by Banff Centre and The Alberta Foundation for the Arts to celebrate Banff Centre's 75th anniversary.

2011: Banff Centre alumnus and Indigenous visual artist Brian Jungen installs his commissioned work The ghosts on top of my head, on permanent display at the entrance of Banff Centre’s Kinnear Centre for Creativity and Innovation.

2017: Visual artist Geoffrey Farmer, who has attended multiple programs as a participant and faculty member, utilizes Banff Centre to prepare for his exhibit at the 57th Venice Biennale, officially representing Canada at its pavilion.

" I paint because I must. I paint from 12 to 14 hours daily. Wherever I go I see something to paint—flowers, bottles—anything. It is a disease."