“These poems and stories . . . face the tragedies of the past, demand the righting of wrongs, and prompt change to create a better future,” states editor Susan Ouriou, a Governor General’s Award-winning translator and the former French-English interpreter and translator for The Banff Centre’s Aboriginal Emerging Writers Program (now Indigenous Writing Program), in her introduction.

The writing within Languages is presented in English translation alongside the French original and interlaced with words in the writers’ Indigenous languages: Innu-aimun, Wendat, Cree, and Algonquin.

“The Banff Centre Press is grateful to Susan Ouriou for her mentorship and recommendation of emerging Indigenous writers; through this publication, these writers will have the opportunity to share their Indigenous cultures and stories with new audiences in French and English translation,” said Robyn Read, Managing Editor, Banff Centre Press.

The book is available for purchase at Amazon.ca, Amazon.com, Indigo, and Kobo.

Learn more about the book at banffcentre.ca/banff-centre-press

About The Banff Centre: The Banff Centre's mission is inspiring creativity. Over 8,000 artists, leaders, and researchers from across Canada and around the world participate in programs at The Banff Centre every year. Through its multidisciplinary programming, The Banff Centre provides them with the support they need to create, to develop solutions, and to make the impossible possible. Moving forward, the Centre will disseminate the art and ideas developed in Banff using new initiatives in digital, web, radio, and broadcast media.

Susan Ouriou (editor) is a Calgary based award-winning fiction writer, literary translator, and interpreter. She helped found the Banff International Literary Translation Centre (BILTC) and has served as a member of its advisory council, faculty, and as its director. In 2009, she received Canada’s Governor General’s Award for Literary Translation and was awarded the insignia of Chevalier in France's Ordre des Arts et des Lettres in 2012.

Christelle Morelli (translator) is a literary translator and French immersion teacher. She lives in Calgary, Alberta.  She has translated works of fiction and poetry for publication, educational curricula, and art catalogues. Born in France, she has lived in Quebec and Western Canada where she now makes her home with her family. 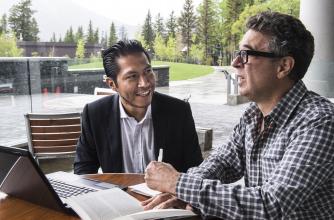