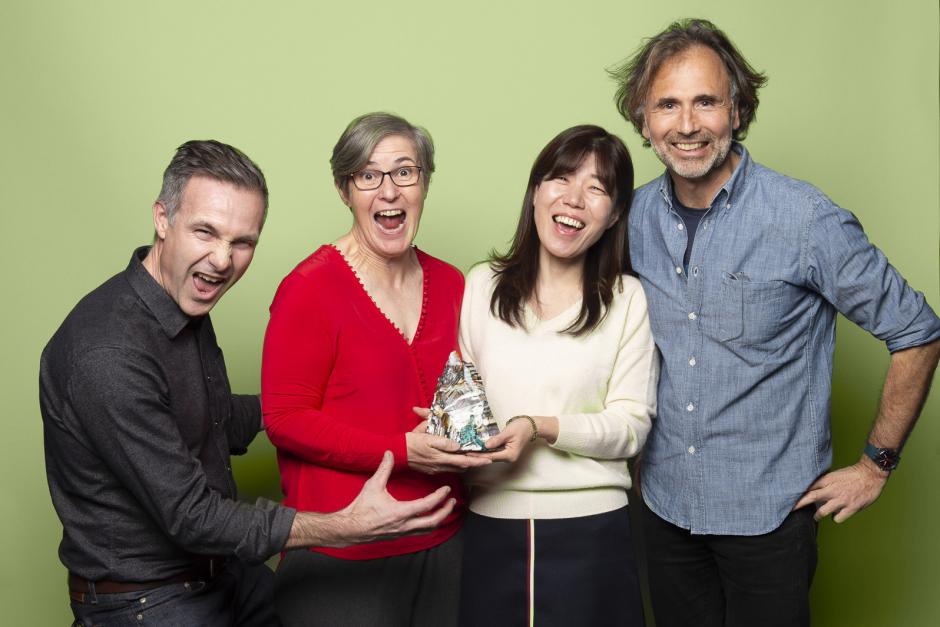 It’s 8:45 a.m. and I’m pacing outside the soundproof door of the viewing studio, “Where the hell is Joachim?”  I think to myself as the four other members of the international film jury sit patiently inside awaiting the delayed start to the day’s work. Finally my missing jury member arrives, steam rising from his lightweight shell jacket. “I’m sorry Jamie, I just couldn’t pass up a sunrise run on Sacred Guardian Buffalo Mountain.” With a wink and a smile the cheerful German joins the others and we roll the first of the morning’s nine scheduled films.

Every year the Banff Centre Mountain Film Competition receives between 350 and 400 film submissions from around the world. From these entries, a dedicated team of pre-screeners spends hundreds of hours narrowing the selection down to the 70 to 80 finalists that will be featured at the Festival and are subsequently considered for inclusion in the World Tour. It’s the role of the international jury to view all film finalists, choose winners, and present the awards on the festival’s final night. It’s my role as Jury Wrangler to help them get the job done – on time.

Our jury is comprised of filmmakers, professional mountain athletes, broadcast industry specialists, and festival directors from around the world – selected for their deep knowledge of the mountain and adventure film genre. My job as a wrangler begins at a welcome reception and orientation with the jury on the opening weekend of the Festival. Over the following five days I continue to shepherd my charges to and from the viewing studio on a schedule that is measured in minutes. Given the gripping, thought-provoking and sometimes heart-wrenching content, the experience can be equal parts exhilarating and exhausting. Five days is not a lot of time to view over 70 films, many of which are feature-length. Regardless, the jury has never failed to meet the challenge.

By day five, film viewing is finally complete but the jury’s job is only half finished as the hard work of selecting winners begins. Often, the Grand Prize is an early and unanimous pick, but there are inevitably passionate deliberations with some of the film category awards.

On the last day of the Festival it’s time for one final round up as I lead the jury through rehearsals for the “Best of the Festival” awards presentation. After presenting the awards with grace and good humour, the jury is finally cut loose and it’s time for this wrangler to ride off into the sunset (or at least to the annual wrap party - which will resume in the future when capacity restrictions and health and safety measures permit of course...).

Along with his role as Jury Coordinator, Jamie Carpenter is a veteran Road Warrior with the Festival's North American Tour. 2020 marked the first year that our international jury reviewed film finalists remotely from their respective homes, with discussions and deliberations as a team to select the award-winners. Again for 2021 the international film jury will be viewing all of the films from the comfort of their homes around the world. We look forward to welcoming the Jury back to Banff soon!

This article is from the 2020/21 Banff Centre Mountain Film Festival World Tour Magazine.
Flip through the pages of the online magazine here.

Given the gripping, thought-provoking and sometimes heart-wrenching content, the experience can be equal parts exhilarating and exhausting.