Many Ways to Be Lost 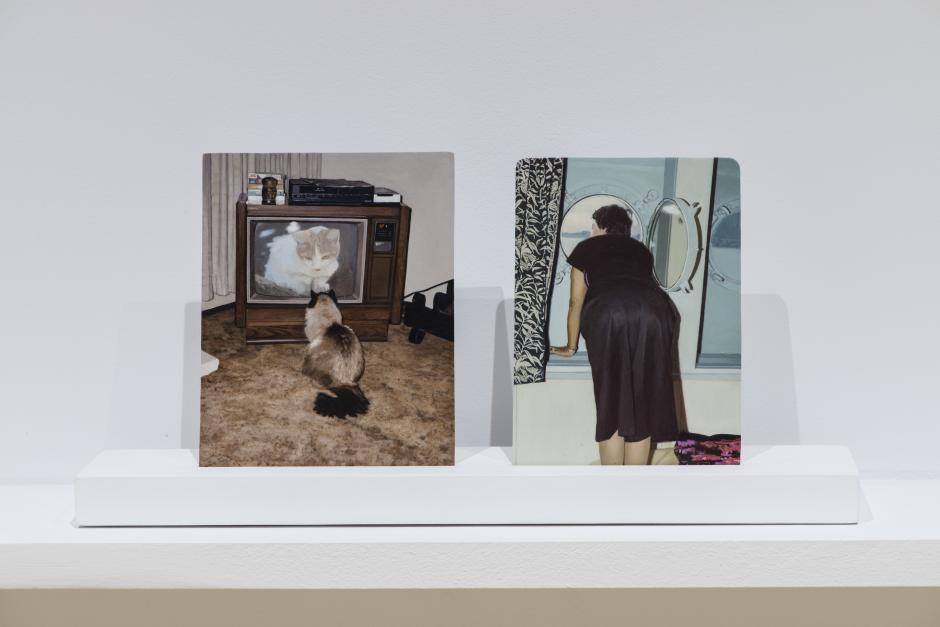 “To lose yourself: a voluptuous surrender, lost in your arms, lost to the world,  utterly immersed in what  is present so that  its surroundings  fade away… to be lost is to be fully present, and to be fully present is to be capable of being in uncertainty and mystery. And one does not get lost but loses one-self, with the implication that it is a conscious choice, a chosen surrender, a psychic state achievable through geography.”[1]

There is a certain physicality associated to being lost. The three solo exhibitions this fall at Walter Phillips Gallery all touch upon ideas of loss as they relate to precarity; the condition of existence that is associated with  the lack or loss of predictability and security that can affect one’s physical, material  or psychological states.

Angelica Mesiti’s The Calling (2013-14) is a three-channel film about increasingly rare structures of language. A triptych of sorts, the film documents languages that use 'whistling' as a verbal form of communication, and their contemporary use in communities  in the Canary Islands, Greece and Turkey. On a map, you can draw an odd, elongated scalene triangle connecting these three places; indicative of the migratory movements of people due to war and empire. These languages use tonal variations and have sonic qualities that are specific and indicative of their region, and often developed out of necessity to communicate over long distances, such as in mountainous regions or in dense forests.[2] Whistled languages are found on almost every continent, for the varied purposes of communicating across distance, for hunting, courtship, or as a night  language, to be used only in the dark. The modern vicinity of the community of languages chosen by Mesiti for The Calling are steeped in the preservation and retrieval of practical traditions.

Let’s start at the end of the film. The last frames close with a sequence that switches back and forth between a child, playing alone and throwing rocks into the ravine, to an inquiring father figure, scanning the landscape. The man’s hand reaches to his mouth, held in a way that resembles a hand puppet of a fox, and whistles out, loud and crisp down the valley. The cinematography evokes the whistle bouncing its way down the valley into the ravine. The child hears and yells “What!“ back up the valley. This exchange is two-fold. Firstly, it illustrates the generational precarity of this language; while one generation speaks the traditional tongue, another only understands and responds otherwise. This generational loss of language is also indicative of larger forces such as increasing globalization and assimilationist policies which are contributing to the loss of indigenous and minority languages globally.  More than a tool for communication, these languages are also a part of a global cultural heritage,  a loss that cannot be replaced.

In the book A Field Guide to Getting Lost, writer Rebecca Solnit noted that  “[s]ome things we have only as long as they remain lost, some things are not lost only so long as they remain distant.”[3] The dark pockets of history and the corridors of time that have been obscured for one reason or another,  perhaps by memory are often  only important because they remain hidden and closed off. On the other hand, the memories on the fringes of forgetting are at risk of permanent erasure. The precarity of memory is central to Elisheva Biernoff’s exhibition Without, within, the largest solo presentation of her work to date. Her practice stages encounters with both the grandiose and less spectacular moments of human experience. The exhibition space is divided into two galleries – without, within – and aims to complicate our relationship to loss in both natural environments and in those familial or intimate.

The first exhibition space of Without, within centers around They Were Here (2009), a large wall painting depicting a beach that is activated by an accompanying sculpture. Like a frame in a film, at first glance this landscape may suggest a pre-human time, before lands were inhabited, before climate change negotiations, before empire, before the sea and the earth were mapped at a mind-bending rate. Perhaps this place was what urbanist Adrian Lahoud describes as the “frontier between the black ink and the white page, between the known and the unknown.”[4]  In contrast to this however, the title They were here implies an intrusion of an unknown group or persons. Maybe this ‘they’ plundered, or were just washed ashore by the failing buoyancy of their ship in a storm.

To look at this work is to be within it; the viewer could be a castaway, a ship’s captain, a stowaway, a passerby, or a land-owner. However, what is clear is that on this equatorial terra incognita, something is awry. The viewer finds a ship wrecked, a dead bird, a volcano in the distance erupting and a looming storm rolling in. A fabricated set of mounted binoculars activates the painting. When looked through, instead of showing a magnified section of the painting, they frame a stereoscopic photo of open-ocean; suggesting the island has disappeared. Temporalities are disrupted here through the act of looking, the work’s title confusing whether this collapse is meant to depict the past, or to serve as an image of the future, a forewarning on the final fallout from human impact on the world.

Accompanying this large-scale work is a series of miniature trompe l'oeil paintings called Last Postcards (2009–2011). Each is an imagined postcard from a historical figure who has disappeared. As a distributable object in this context, the postcard could be a posthumous message – a love letter, or a suicide note. Figures include Eduard Toll (1858–1902), a Russian explorer presumed dead after severe icy conditions on his last voyage to find the rumoured phantom island in the high arctic sea, Sannikov Land; and George Bass (1771–1803), a British naval surgeon lost at sea on his way to Tahiti, his crew and ship never seen again. The exhibition also includes an imagined postcard from Joshua Slocum (1844-1909), the first person to single-handedly circumnavigate the world by boat, who disappeared in 1909 on another attempt.

Artist Bas Jan Ader (1942–1975) is included in the series, who set sail in his four metre Guppy boat, named Ocean Wave, in an attempt to cross the Atlantic. Radio contact was lost after three weeks, and his boat was found ten months later off the Irish coastline. His body was never recovered, and it is unclear whether his tiny vessel was hit by a rogue wave, or whether this was his very last act, a performance of his own death. To be lost can refer to one not knowing one’s own whereabouts, however these postcards offer themselves as speculation on the figure’s last thoughts, perhaps mailed from their last known location.

The second space of Without, within speaks to repatriation of personal and familial memory. Biernoff’s practice includes the archiving and collection of photographs of mostly discarded, intimate scenes and portraits of unknown people, families and the spaces in which their lives played out. Often, two images are paired. The people in them, unknown to each other, are placed side by side by Biernoff. The works serve as tiny monuments to someone else’s memory, and are complicated by the fact that these are moments that Biernoff never directly experienced. The diptychs often have formal similarities, whether an out-of-focus landscape, a floral jacquard couch or a framed picture of Christ hanging in a kitchen. This gallery is not about an explicit exploration of domestic themes, but rather about the less remarkable moments of our lives, made remarkable through the artist’s careful rendering. These small works employ an optical trickery, but not a deception – found photographs are hand-painted meticulously in memorium of the people in these images, rendered alive again in the coupling by the artist.

The extraction of lost histories is monumentalized by artist Tyler Los-Jones in held above our heads in stone (2015). A public artwork commission, this work is poised in the rafters of the archway at the outdoor entrance to Walter Phillips Gallery. Suspending belief and inverting gravity, Los-Jones has constructed objects that resemble the strata and rock formations such as limestone, chert, and sandstone that are found around Banff Centre and its home, Sleeping Buffalo Mountain. In Los-Jones’ research, he discovered that the film River of No Return (1954) starring Marilyn  Monroe and Robert Mitchum was shot on location  in and around Banff National Park and Kananaskis Country. Part of the set’s construction for the film included the fabrication of rocks and boulders, many of which were left behind in the area. The locations are kept quiet by the locals, who want to protect this strange part of the history. At this time, the boulder’s sites are unmapped, the props camouflaged perfectly alongside their real counterparts.

While the work could be read as an homage to the monumental works of seminal figures of the Land Art movement,  this understanding of held above our heads in stone is complicated by the use of man-made materials in place of actual boulders. Like Biernoff, Los-Jones uses trompe l'oeil to suspend belief about the materiality of these objects. Each boulder, fabricated from fiberglass and foam, is carefully painted to resemble geologic formations found in the area. The uncanny quality to the work is also echoed in its installation; the boulders wrap around the beams, slowly encroaching on the structure. Though Los-Jones’ constructed boulders specifically refer to a pre-human  time (approximately 359-299 million years ago) when the mountains  surrounding Banff were in fact the seafloor, he has placed these objects in such a way as to gesture to the entropy  that happens after a monument is forgotten.

In 1854 the transcendental novelist Henry Thoreau reflected on a life in the woods.“Not till we are completely lost, or turned round – for a man needs only to be turned round once with his eyes shut in this world to be lost – do we appreciate the vastness and strangeness of nature. Not till we are lost in other words, not till we have lost the world, do we begin to find ourselves, and realize where we are and the infinite extent of our relations.”[5] Even though Thoreau describes a romantic idea of nature, this quote straddles ideas of precarity, monumentality, our inner lives, and our individual and inextricable connection with the world, as found in these solo exhibitions. Geographically and temporally, these exhibitions contain micro-climates of histories that crisscross the globe in an effort to recover things and stories that are on the cusp, and just out of reach. This trilogy of exhibitions ties people to the land and to their environment, making us accountable for our impact and cognizant of the faraway effects of our decisions.