A Brief History of Opera 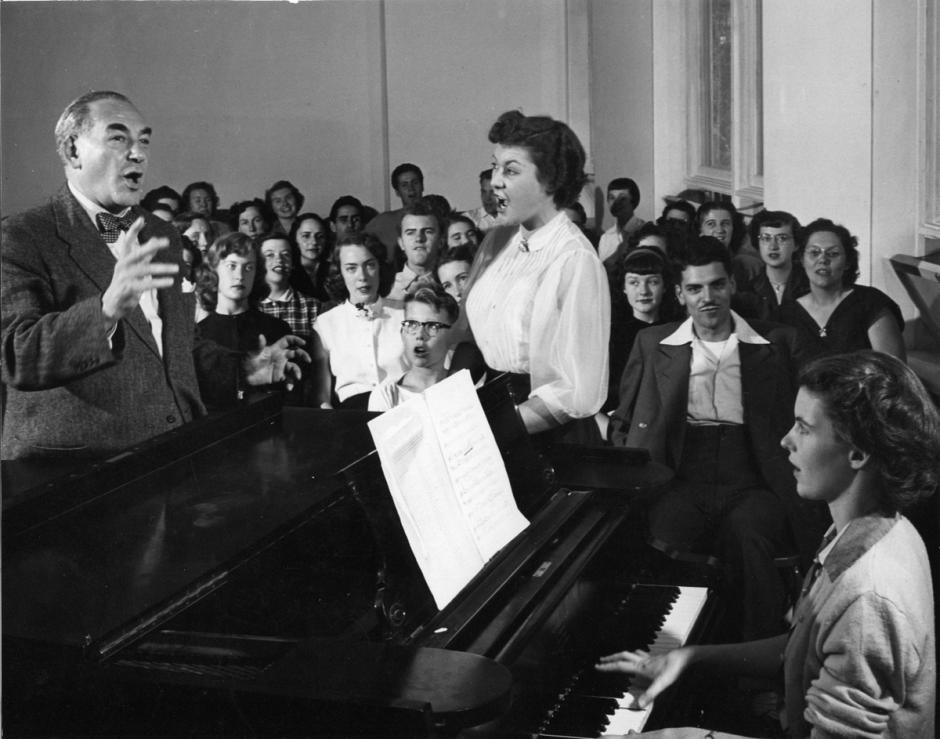 Banff Centre has been training artists since 1933 in the Canadian Rockies. The Opera program was founded in 1949 when the Centre’s director Donald Cameron hired Ernesto Vinci, of the Royal Conservatory of Music in Toronto, to teach singing. He taught and directed opera at Banff Centre for the next 20 years, and the foundation Vinci built created a permanent space for opera performance and training in Banff.

In the late 1970s and throughout the 1980s, Opera programs at Banff Centre flourished, attracting the highest-calibre Canadian singers, many who returned as faculty, including: Richard Margison, Michael Schade, and Tracy Dahl. Operas became a highlight of the annual Summer Arts Festival.

Over the decades Banff Centre has featured opera productions almost every season, including the premieres of two original Canadian productions – Filumena and Frobisher – as well as Banff Centre's 75th Anniversary tribute performance of Dido and Aeneas, which was dedicated to Ernesto Vinci, Donald Cameron, and to the pioneers of opera at the Centre.

In 2014, Joel Ivany was appointed Director of Opera, and spearheaded a unique collaboration between Banff Centre, the Canadian Opera Company, and Against the Grain Theatre, allowing Banff Centre to continue to re-imagine opera for a 21st century audience through its innovative programs and performances.

To see highlights from Banff Centre’s opera history please scroll down to the dateline.

To view original course calendars and event programs from our legacy of opera productions from 1950 onward please click here.

1949: Banff Centre director Donald Cameron hires Ernesto Vinci, from the Royal Conservatory of Music in Toronto, to create an opera course and that first year, 28 students attended the course.

1949: Richard Eaton from the University of Alberta Music department teaches a choral technique course. Eaton and Vinci taught together for nine years at Banff Centre and established the foundation for the opera programs.

1952: Banff Centre presents the Canadian premiere of Dido and Aeneas, composed by Henry Purcell, directed by Leona Paterson, and conducted by Clayton Hare. At least one opera per year is staged over the summer at Banff Centre for decades to come.

1953: Eileen Higgin, a leading catalyst of opera and music in Calgary, joins Banff Centre’s opera faculty as an operative coach.

1956: Alexandra Munn and Marilyn Perkins join the opera staff. Banff Centre tours its production of Mozart’s Abduction from the Seraglio to Calgary.

1957: Alexander Gray attends Banff Centre opera programs and plays a leading role in the two operas produced that year: Gianni Schicchi and The Old Maid and the Thief.

1968: Ernesto Vinci retires from Banff Centre’s opera program, and is the recipient of an honourary doctorate from the University of Calgary.

1977: Richard Margison attends Banff Centre’s opera program as a student and went on to participate in multiple programs over the next five years. He would return to Banff Centre in 2009 as faculty.

1979: Banff Centre alumnus Alexander Gray leads the opera program with administrative assistance from George Ross. Faculty from the era include Leon Major, Walter Ducloux, and Boris Goldovsky. Ben Heppner attends Banff Centre as a participant and sings in the chorus of the opera production that year.

1983: Tracy Dahl takes part in the opera program at Banff Centre, the first of many years she would participate here.

1990-1991: Mozart’s The Marriage of Figaro and Cosi fan tutte are directed by Colin Graham with set and costume design by Susan Benson.

2000: John Estacio and John Murrell are commissioned to create Filumena, an original Canadian opera based on the life and untimely death of Florence (Filumena) Lassandro.

2005-2014: Kelly Robinson directs opera productions at Banff Centre, including productions of Filumena, Frobisher, The Magic Flute, and Dido and Aeneas – a performance in celebration of Banff Centre’s 75th Anniversary and dedicated to Donald Cameron, Ernesto Vinci, and the founders of the opera program at Banff Centre.

2013: Philippe Sly, a grand prize winner of the 2011 Metropolitan Opera National Council Auditions, and Ben Heppner perform a recital. The opera season wraps up with Benjamin Britten’s contemporary story Owen Wingrave, produced in partnership with the Guildhall School of Music and Drama and directed by Kelly Robinson.

2014: Joel Ivany, Founder and Artistic Director of Toronto’s Against the Grain Theatre, is named director of Banff Centre’s opera program. An updated production of Don Giovanni called Uncle John, set in modern day Banff, is presented with a new English libretto. Joel Ivany also starts an Opera Pub night, a casual evening of short operatic arias and beer at the Legion Hall in the town of Banff. It’s an immediate success and now takes place over the summer in Banff and in the fall in Toronto.

2016: The Rape of Lucretia, an intimate, haunting masterpiece, is the annual production for the opera program.

2017: Kopernikus by Claude Vivier is presented by the opera program. Filumena is remounted by Calgary Opera, 14 years after its original premiere. Banff Centre alumna Tracey Dahl receives the Order of Canada for her contribution to opera.

"It was a wonderful thing, to be able to tour with what we had done here. To us, that was just as important, if not more so, than coming to the school. We would perform twice in Banff and then do five extra shows on the road, which gave us the experience of working as part of a touring company."

Alexander Gray, from Artists, Builders and Dreamers: 50 Years at the Banff School, by David and Peggy Leighton.